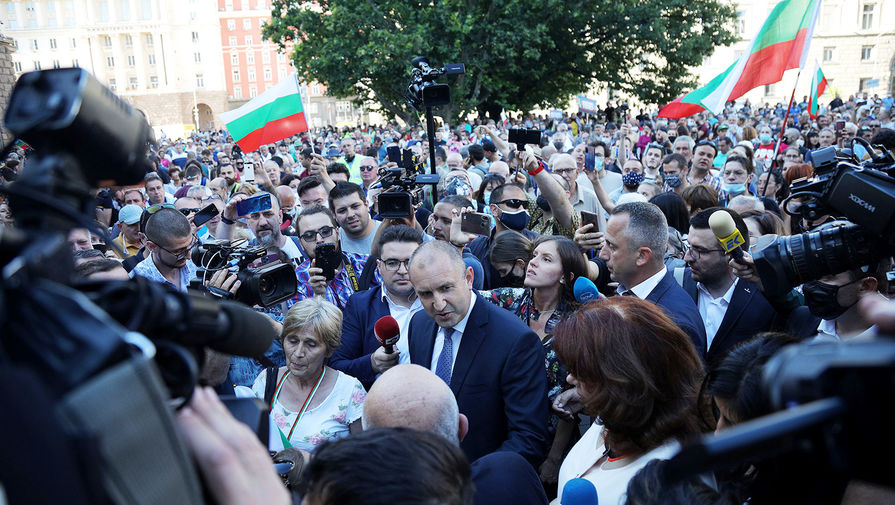 In Bulgaria sparked perhaps the most serious in the last few years of political crisis. The President came into open confrontation with the government, accusing the Cabinet in connection with the mafia and led the street protests. The impetus for the beginning of this story is a provocation of a large policy with the installation of the Bulgarian flag on the private beach.

Thursday, July 9, on the streets of Sofia were hundreds of people to protest against government activities. They were led by the President of the country rumen Radev, who in the past week ensued a serious skirmish with the Executive.

The reason for the protest was the discontent of the population the economic situation in the country, and regular corruption scandals. The calls of the President Radeva equate the Prime Minister Boyko Borisov to the member of the mafia, only escalated the protest.

“Bulgarian mafia has achieved the impossible and United the honest people against her, chanted Radev, apparently satisfied by the fact that the protest brought together representatives of different political views. All we need to expel the mafia from the Executive, to expel the mafia from prosecution, which the oligarchs used the most ruthless manner as my shield and for political repression.”

Statements of the head of state has predictably drawn criticism from convicted departments.

The country’s chief Prosecutor Ivan geshev accused the President of “unprecedented pressure” on law enforcement. The charges were very similar to those put forward a day earlier the head of state, “Yesterday, Radev said that the Bulgarian Prosecutor’s office — the mafia. Thus Radev became an ally of the oligarchs and politicians who robbed the Bulgarian people”.

The relationship of the socialist rumen Radeva with the government focused on Europe of the center-right Boyko Borisov has never been good. However, the beginning of the acute stage of the conflict was expected to present Tuesday a fairly absurd essentially the situation.

Flag on the beach

Tuesday, 7 July the head of the anti-corruption party “Yes, Bulgaria,” Hristo Ivanov went to the beach in the Park Rosenets on the West coast of the Black sea, to set there the Bulgarian national flag.

Seemingly harmless actions in the Bulgarian political context, was a serious provocation.

The fact that the territory that Ivanov chose to Express their Patriotic feelings, although de jure it is a public, de facto belongs to Ahmed Doğan — political heavyweights Bulgaria, formerly head of the Turkish ethnic party.

When Ivanov arrived on the scene, he was immediately overpowered the skinhead guards in sunglasses. His requests to be submitted to the “anonymous gentleman” was not a success, and even the arrival of police did not solve the problem: police guards did not argue, although documented Ivanov argued that the beach is public. It was all captured on camera.

Ivanov knew what he was doing. Dogan is still considered one of the key behind-the-scenes influencers in Bulgarian politics. After his party he is closely associated with the most famous member of Parliament, the media Mogul Delana Peevski.

“Reporters without borders” describe Peevski as the “embodiment” of collusion between the Bulgarian oligarchs and politicians.

Ivanov, being a former Minister of justice, also not far from this opinion. He argues that Peevski “is in the poisonous circle that poisons the legal system of the country.” My trip to the “private beach” he later explained, the intention is to show that the oligarchs are above the law and to protect their interests using employees of the state security service, which was twist Ivanov’s men.

They were identified by none other than the President of rumen Radev. And then appealed to the Prosecutor that that checked the coastal objects Dogana and have found why the protection of the state security service are not eligible people.

The Prosecutor’s office against

Further events developed rapidly. The chief Prosecutor, gechev said that his Department would not “get involved in petty political games,” and refused to comply with the request of the President.

On the same day the Prosecutor’s office detained two advisers Radeva, accusing them of influence peddling and revealing state secrets.

The President expressed confidence that the arrests were a response to his criticism of the Prosecutor’s office. The head of state supported the Bulgarian socialist party. “Against President Radeva war is waged from the first day of his election, — have informed in a press-service of the organization. — Control most to this day do not accept that there can be an institution that thinks differently, has different values, fighting for other things.”

Statement of the Prosecutor’s office look even tougher. Geshev demanded that the President tell whether he knew the criminal activities of his advisors. And threatened with possible prosecution against the President:

“The only untouchable man in Bulgaria — it is the President. We wait the constitutional court’s decision of its immunity. We are willing to wait and finish his mandate. Radev dropped the prestige of the entire state, arguing that the prosecution is mafia”.