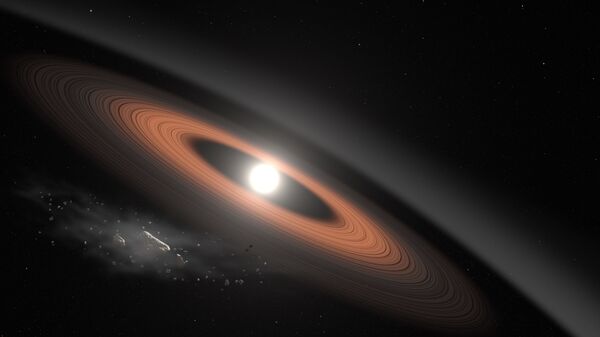 Analysis of white dwarfs in the milky Way and other galaxies showed that stars of this class can be an important source of carbon — an element necessary for life. The study is published in the journal Nature Astronomy.

All the carbon atoms in the Universe were created by fusion of three helium atoms. But astrophysicists are still arguing, stars what kind are the main source of carbon.

Approximately 90 percent of all stars end up white dwarfs — very dense stellar remnants, which are gradually cool and fade over billions of years. The data obtained by astronomers from the USA, UK, Canada, Sweden, Italy and Switzerland, suggest that white dwarfs were the same important sources of carbon, as the explosions of massive stars in a supernova.

Before burn, these stars, according to scientists, leave an important legacy — distributed in the surrounding space stellar wind enriched in chemical elements, including carbon, synthesized in the deepest bowels of the star during the last stages before death.

The authors 2018 studied at the Keck Observatory in Hawaii spectra of star clusters — groups of several thousand stars formed from the same giant molecular cloud, about the same age and United mutual gravitational attraction.

“From the analysis of the observed spectra we were able to measure masses of white dwarfs — presented in a press release from the American astronomical society the words of one of the authors of the study Enrico Ramirez-Ruiz (Enrico Ramirez-Ruiz), Professor of astronomy and astrophysics, University of California, Santa Cruz. — Using the theory of stellar evolution, we can trace their history to the stars-progenitors and to weight at birth”.

The relationship between the initial and final mass is known as the initial-final mass relationship — a fundamental astrophysical parameter that combines information on all the life cycles of stars. In General, the more massive the star was at birth, the heavier remaining after her death white dwarf. This trend is confirmed by both theory and observations.

But the analysis of newly discovered white dwarfs in star clusters gave a surprising result: the mass of these white dwarfs was much more than expected, which led to the emergence of a “bend” in relation to the initial-final mass for stars within a certain range.

“Our study interpreterpath this kink in the initial and final mass relationship as a sign of synthesis of carbon produced by stars with low mass in the milky Way,” says lead author Paola Marigo (Paola Marigo) from the University of Padua in Italy.

Analyzing the initial-final mass ratio around the bend, the researchers came to the conclusion that the carbon was distributed stars in two and more times more massive than the Sun, while stars less than a solar mass did not.

The more massive star in the latter stages of life produced in their warm depths carbon atoms and transferred them to the surface, where they blew a stellar wind. The scientists performed simulations showed that the removal of the outer mantle such stars are rich in carbon, was rather slow to the Central core of these stars — white dwarfs future — has grown considerably in mass.

“Now we know that carbon came from stars with a birth mass of not less than one and a half solar masses,” notes Marigot.

The authors believe that the bright, close to his death-star is very similar to the progenitors of white dwarfs, currently make a huge contribution to the radiation of distant galaxies, where there is the formation of carbon.

All eyes on public health