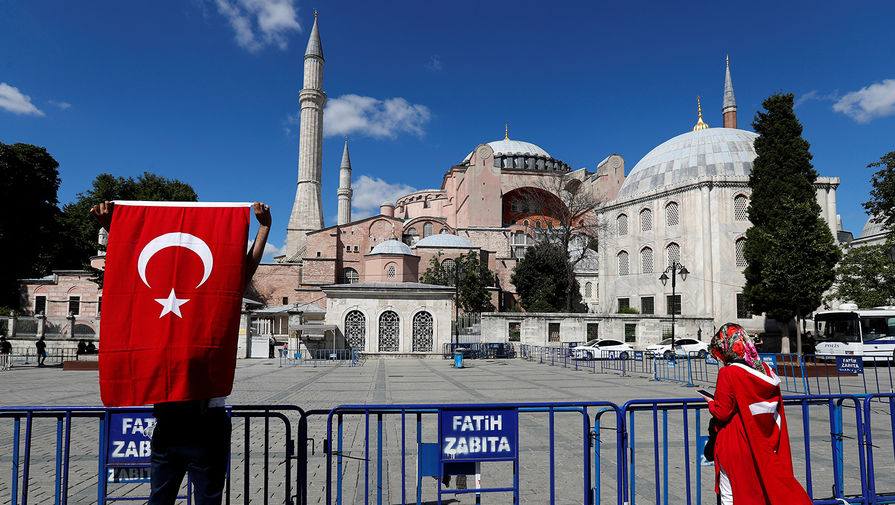 The state Council of Turkey took the decision to turn the Hagia Sophia in Istanbul into a mosque. The new status of UNESCO monument with his signature secured Turkish President Recep Tayyip Erdogan. Many countries and international organizations have expressed concern about the decision of the Turkish authorities. But the Turkish foreign Ministry said that Ankara has the right to independently determine the status of a Cathedral.

Turkish President Recep Tayyip Erdogan signed a decree according to which the Cathedral of St. Sophia (Hagia Sophia) in Istanbul became a mosque. A photo of the document, the head of Turkey posted on his Twitter page.

“To transfer control of Ayia Sofia Dianyu [management of religious Affairs of Turkey], and open it for worship,” — said in the decree.

Change the status of the Cathedral caused a great resonance in the world. So, the concerns expressed to UNESCO, whose world heritage list includes the historical monument. In addition, dissatisfaction was shown in Greece, Russia and other countries and international organizations. But Turkish foreign Minister Mevlut Cavusoglu said that the Turkish authorities were entitled to act without considering the opinions of other countries.

Hagia Sophia was founded by the Christian Emperor Justinian, worship it began on 27 December 537.

More than a thousand years this Cathedral was the largest Church in the Christian world.

In 1453, after the Ottomans captured Constantinople and Byzantine Empire fell, the Cathedral was converted into a mosque. But in 1934, the building became a Museum — so ruled the founder of the modern Turkish state Kemal Ataturk.

The current authorities of the country assure us that the Cathedral will be able to accept all comers, and in the building will remain Christian icons. As noted by the press Secretary of the President of Turkey Ibrahim Kalin, all the main mosques of the country are open to both believers and tourists, and the Hagia Sophia is no exception. According to the Turkish Ministry of tourism, for 2019 this Cathedral was visited by more than 3.7 million people.

According to first Deputy Chairman of state Duma Committee on international Affairs Dmitry Novikov, changing the status of the Cathedral will be painfully perceived by the Orthodox world.

“This, I think, not only for the Orthodox world painful, and it is on the inside of Turkish life, socio-political, cultural, affect not the best way.

Once again, remember atatürk — his legacy is associated with the formation of a secular state,” he said in comments to RIA “Novosti”.

Novikov said that Islam in Turkey is the leading religion, but in this great country we live representatives of different faiths and nationalities. “And from the point of view of positioning of Turkey in the modern world, of course, the decision to save Sofia if it took place, would be in the interest of the whole world, the interests of representatives of different Nations and faiths, and I think that, of course, the interests of Turkey,” — said the Deputy.

In the Russian Orthodox Church has commented on the Turkish decision. Church representatives expressed regret at the fact that the words of the Patriarch were not heard by the Turks.

“In his statement of 6 July, his Holiness Patriarch Kirill said that “the duty of any civilized state is to maintain balance: to reconcile the contradictions in society, and not to aggravate them, to encourage people to unite, not division.” It is unfortunate that these words were not heard”, — said the head of the Department for Church relations with society and mass-media Vladimir Legoyda in an interview with RIA “Novosti”. He added that

“inter-religious peace and harmony” are “extremely subtle and deep issues.” In his opinion, they do not tolerate “ill-conceived and purely political decisions”.

Unfortunately due to a change in status of the Church was expressed by the head of the Duma Committee on international Affairs Leonid Slutsky.

“The issue of changing the status of the Church-Museum of Hagia Sophia only formally it may seem that is an internal matter of Turkey, in fact it is not so. The Hagia Sophia, a UNESCO world heritage site, has the status of a Museum that entails a number of legal obligations on the part of the Turkish authorities on the preservation of the universal value of this monument,” he said in comments to the Agency.

He drew attention to the uniqueness of the Cathedral from the point of view of historical value. Slutsky concluded that “Ankara is far from this understanding.”