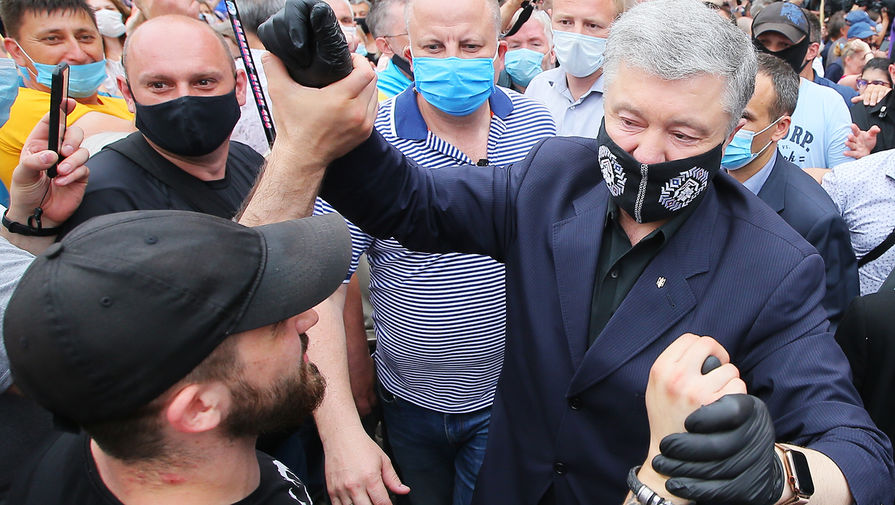 The publication of alleged conversations of Petro Poroshenko with Vladimir Putin and Joe Biden was obviously aimed at weakening the position of the former President. Representatives of the former government in Ukraine is almost completely left the political arena, Poroshenko was the only heavyweight, who could navigate the nationalist electorate. As published records of conversations will affect the ratio of radical voters for Poroshenko — in the material “Газеты.Ru”.

The ex-President of Ukraine Petro Poroshenko is already preparing for local elections to be held in the fall. Ukrainian journalists and political scientists predict that a politician may try to get revenge, not so much success in the election itself, as an organization of the protests.

The primary electorate Poroshenko remain nationalists, who are forced to unite under one flag, as other political heavyweights who used their support either left the stage or working in the team of the former President. Meanwhile, Petro Poroshenko, the only remaining politician-the heavyweight who is able to lead the nationalist camp, had already received several blows, put support at risk.

Warm conversation with Putin and Biden

9 Jul MP Andrey Derkach has published two recordings of telephone conversations: it is estimated that Petro Poroshenko with Russian President Vladimir Putin and Petro Poroshenko and Joe Biden, who at the moment was the Vice President of the United States.

Dialogue with the Russian leader, as stated by Andriy Derkach, April 30, 2015 — two months after the fierce fighting for Debaltsevo. Relations between Russia and Ukraine have been spoiled at the time, and Petro Poroshenko already in full use and provorny anti-Russian rhetoric.

However, the conversation between the presidents took place in quite warm and even friendly colours. They discussed the entry of peacekeepers in the Donbass, the work of the trilateral contact group in Minsk and the Ukrainian economy.

Allegedly Poroshenko congratulated Vladimir Putin on 1 May, they exchanged jokes and shared plans. After that the Russian leader was asked about the situation in Ukraine.

“Do it. The more, the easier, because you already have built up some kind of vertical. Because when I came, was not easy. But political stabilization in the face of economic problems, to put it mildly, to build is not easy. But I can tell you that the long waiting list for the post of the Ukrainian President is not observed”, — said Poroshenko.

At the end of the conversation policy is sufficient warmly said goodbye to each other:

— Well, Vladimir Vladimirovich. I shake his hand. Thank you very much.

The second dialogue, presumably Petro Poroshenko and Joe Biden occurred on 19 August 2016. Vice-President of the United States associated with Ukrainian leader to discuss the arrest in the Crimea citizens of Ukraine, which Russia declared saboteurs. It is noteworthy that Kyiv has denied such accusations, however, politicians discussed the operation as valid.

Joe Biden expressed on my own behalf and on behalf of the President of the United States (at the time this position was held by Barack Obama) concern. He said that in the current situation it is necessary to act through political and diplomatic efforts, not military operations.

“As you know, we intervened once before, as it happened, when he learned that the General staff performs certain activities. So we are given to understand that we do not support this. You took a step back, but the next day it happened, — said Biden and Poroshenko. — I will tell frankly: he’s not happy about this. That is, the head of your military intelligence has received a clear signal from the us a few weeks ago regarding our categorical rejection of planned sabotage operations against military facilities on the territory of Russia”.

The Vice President of the United States also States that such actions can change the position of France and Germany as allies of Ukraine, and, however, Russia may also use such transactions on the part of Kiev for their own purposes.

Poroshenko, however, said that during the incident he was not in Ukraine and it will take all measures “to make impossible such a situation in the future.”

The party of ex-President of “European solidarity” called the recording a fake, and the responsibility for their appearance is laid on Russia.

“For 6 years, the fakes are one of the permanent instruments of the Russian hybrid war against Ukraine, and against the person of the fifth President of the country, the leader of “European solidarity” of Petro Poroshenko”, — is spoken in the official statement of the EU.

Like merged conversations can affect the position of Poroshenko

The alleged conversation between Putin and Poroshenko called in Ukrainian society discussion about how the ex-President himself kept his chosen anti-Russian line, especially in private conversations with the President of Russia.

Similar warm manners in dealing with “enemy” as it was called Poroshenko himself, of course, on the one hand, can cause the image blow to the former President. For example, from Vladimir Zelensky representatives of the former government and nationalists were expecting a “hard” behaviour at a meeting with Vladimir Putin in Paris during the meeting “Norman Quartet” in December last year.

In particular, the manner of communication of the Ukrainian leader was one of the criteria for assessing its first summit in the Normandy format.

“The President Zelensky done. Very correctly and firmly holds position. “Zrada” [betrayal] is not” — commented on the negotiations attending the meeting the head of the MIA of Ukraine Arsen Avakov, who held the position also during the presidency of Poroshenko and considered the first time one of his supporters.

As for the alleged conversation of Petro Poroshenko and Joe Biden, here you can also see disagreements with the position of radicals who, by contrast, advocate the conduct of hostilities with Russia to speak out strongly against the settlement of the conflict by diplomatic means.

Ukrainian nationalists broke with Zelensky breeding strength in Gold and Petrovsky (one of the conditions for the holding of the meeting in the Normandy format), and organized protests against the approval by Kiev of the formula Steinmeier (mechanism, implying the holding of elections in the Donbass, followed by assigning the region a special status).

For them the observance of the Minsk agreements is tantamount to the surrender of Ukraine — is another element of rhetoric used by Petro Poroshenko.

Meanwhile, in dialogue with Biden, who insists on halt to all military provocations, the ex-President of Ukraine confirms its readiness for it. “I just confirmed that we plan to act only political and diplomatic methods”, — he said.

If not Poroshenko, who?

Some Ukrainian observers believe that the publication of such records would inflict damage on positions Poroshenko, who may lose the support of the nationalists.

“The record will not allow Poroshenko to unite the fragmented right-wing opposition, with which he could create problems for the government in the autumn in the form of mass protests.

The right will not forgive lubericant Poroshenko with Putin”

Indeed, the nationalist-minded part of society is now in a state of disunity. In the parliamentary elections last year, the part of the electorate Poroshenko took Svyatoslav Vakarchuk and his party of “the Voice” — new people in Ukrainian politics.

However, over time the party failed to get stronger and to increase its popularity. In June Vakarchuk has resigned of the Deputy of the Verkhovna Rada, which can have a negative impact on the rating of “the Voice”, whose popularity is largely based on the popularity of its founder.

However, it is worth considering the fact that the nationalist niche is simply no more politicians who could make Poroshenko the competition. And this can only play into the hands of the former President, said in a conversation with “Газетой.Ru” Director of the Kiev Center of political researches and conflictology Mikhail Pogrebinsky.

“His electorate is in a difficult position. A clear leader is no other, and this is. He has money, he has a TV, he has support in the West, maybe not total, but, in General, quite serious. So, even knowing that he is a thief, corrupt and generally not a patriot, looking at it as he spoke with Putin, they will find an excuse: it is necessary to him as it is to negotiate with the enemy,

— said the expert. Many of those who go for Poroshenko, aware that he was not someone to change, at least not yet. Therefore, any attempt to discredit him they will perceive it as the hand of Moscow that it’s all invented, or that he’s just saying that to fool Putin.”

In the party Poroshenko also do not believe that the published record can cause any damage to politics and his party.

“The ratings of European solidarity are growing at the fastest pace of all political forces in Ukraine since the summer of last year [gone from] two and a half times. Therefore, all these alleged scandals and the attempts of political persecution do not affect the fact that people see the difference between the current government, which is not successful and the previous government that was so badly promoted Ukraine to Europe and democracy,” — said in a conversation with “Газетой.Ru” Verkhovna Rada Deputy from the party Poroshenko “European solidarity” Alexey Goncharenko.

Indeed, a year ago in the parliamentary elections “European solidarity” received 8,10% and took fourth place, but now, according to the June poll by the Razumkov center, the party Poroshenko support of 15.7%.

The truth, however, grow and position of the “Opposition platform For life”, advocating for ending the conflict through diplomacy and the implementation of the Minsk agreements. This political force in Parliament with a score of 13.05% and took second place.

Now research shows the level of support at 22%. The leader of the party Yuriy Boyko support 20%. In April, his approval rating did not reach 11%. “The opposition platform of Pro — life” even once in the six years after the events of Euromaidan have not reached such a level of popularity that, first, indicates a gradual decline of nationalist sentiment and increased demand for the end of the war, and, secondly, about disappointment as nationalists and of the electorate of the South-East in the current President.