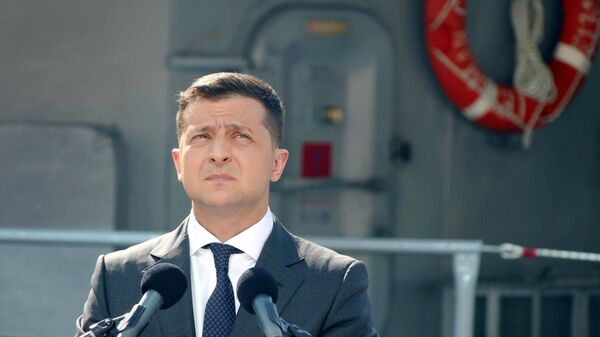 Ukrainian party “the Opposition platform For life” urged President Vladimir Zelensky and his team to resign.

This is stated in the statement published on the website of political power.

The reason indicated inability of authorities to ensure a peaceful settlement of the conflict in the Donbass. Representatives of the party recalled that Zelensky won the presidential election under the slogan “the World for a year!”, however, according to them, “today, we-power has become a clone of the regime Poroshenko.”

In addition, the key negotiators from Ukraine destroy the Minsk agreement, the statement says. So, Deputy Prime Minister and first Deputy head of the Ukrainian delegation in the trilateral contact group Alexey Reznikov said that reintergrate of Donbass will take 25 years. This statement indicates a recognition on the part of authorities to the world that it is not seeking, and with his main political mission can not cope.

According to representatives of “the Opposition platform for life”, the continued stay of the team Zelensky in power is contrary to the needs of the Ukrainian people and contrary to national interests.

The course for the destruction of the Minsk agreement poses threat of another escalation of the confrontation, which can lead to new victims and destructions is specified in the address. The only way to prevent this is to change course and expel the “adherents Poroshenko of all the negotiation formats or change the power, leading the country to disaster”.

The statement also says that no one gave Zelensky and his team the mandate to “a quarter of a century led the country through the desert conflict.” The time has come to choose — to give the country peace, or leave with an apology, concluded the authors.

Furthermore, in another communication, the party stated that the power of the President Zelensky “degraded to the level of an external colonial administration”, and the only purpose of her reign was the execution of instructions from external creditors, as well as ensuring profits for foreign financial speculators. In addition, the statement mentioned the sale of national wealth and the destruction of Ukrainian families.

“While we-the team completely devastated the Ukraine, she has followed their predecessors to resign and to resign,” — said in a statement.

The party stressed that the country’s raging epidemic, however, the problem of hospital funding and procurement of commodities has not been resolved. The economy is in a severe crisis. Power, according to representatives of “the Opposition platform”, continues the course of Poroshenko listening to the instructions of the IMF: raises tariffs destroys the medicine. The crisis intensified, as well as increasing poverty and unemployment.

The party demanded to stop the implementation of the requirements of the International monetary Fund and stop the process of turning Ukraine into a “feeder for myself and for a friend Poroshenko.” To restore peace, to pull the country “out of the clutches of creditors,” and to ensure economic development and improved living standards, the current government must go, assured the representatives of “the Opposition platform”.