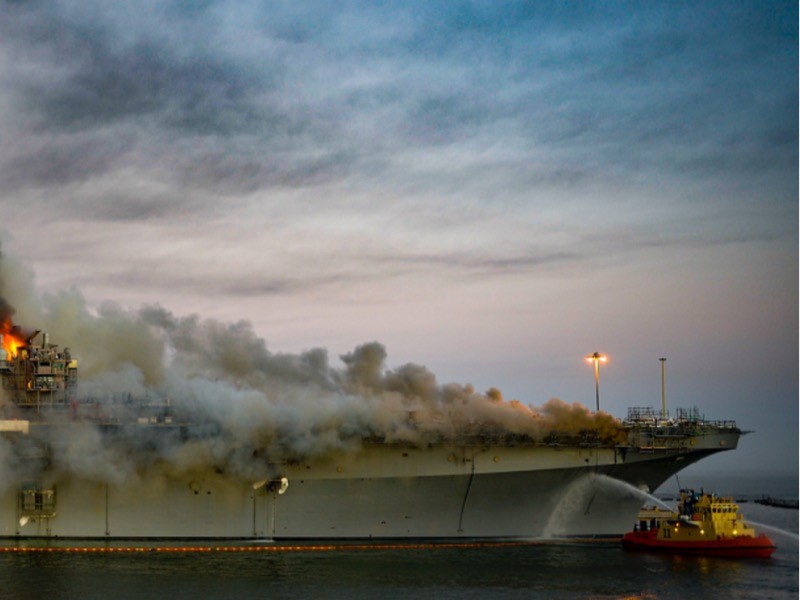 At the naval base in San Diego (CA) caught fire on the American landing ship, USS Bonhomme Richard, according to the fire Department of the city on his Twitter page. The fire started around 8:30 local time. In extinguishing the fire was attended by local firefighters, and a command of a naval base and ship. During an outbreak of fire on Board were 160 members of the team, they were evacuated.

According to the New York Times, after the fire started in the ship explosion. When the incident injured 17 sailors and four civilians, their injuries are not life-threatening. About the level of damage and cost of repair of the ship is not known, however, the command is determined to return the ship to duty.

The fire chief San Diego Colin Stowell told CNN that the ship could burn for another few days, “down to the waterline”. With fire fighting fire team on Board the vessel and the tugboats of the Navy of the South-Western region of the Bay.

As stated at the press-conference the representative of command of the U.S. Pacific fleet, rear Admiral Philip Sobek, quoted by RIA “Novosti”, the fire on the ship was not in the explosion, but the cause of the fire is still unknown. The explosion occurred due to the increase in temperature on the ship in a fire that started on the lower cargo deck.

Also, Sobek reported that on Board the ship is “about a million gallons of fuel” (more than 3,700 tons), and firefighters are trying to prevent its ignition. The condition of the victims in the accident is stable, their injuries are mostly associated with poisoning by combustion products.

The representative of the Ministry of defense reported that allegedly, the fire started on the “well deck”, which is used to exit the water on a small landing craft. The Secretary of defense mark Esper briefed on the situation.

USS Bonhomme Richard, a universal class ship Wasp, adopted for service in the U.S. Navy in 1998. In the composition of his team of 102 officers and more than 1 thousand sailors. The length of the vessel more than 250 metres, a displacement of more than 28 thousand tons. the Ship is equipped with anti-aircraft rocket launchers and flight deck and can carry including helicopters, boats and vehicles-amphibious.

SDFD was requested by Federal Fire at about 9am. #shipfire pic.twitter.com/Ah6GRzpJHJ

In the process of accounting for all firefighters and clearing the area. #shipfire pic.twitter.com/ldjvu5WzgB