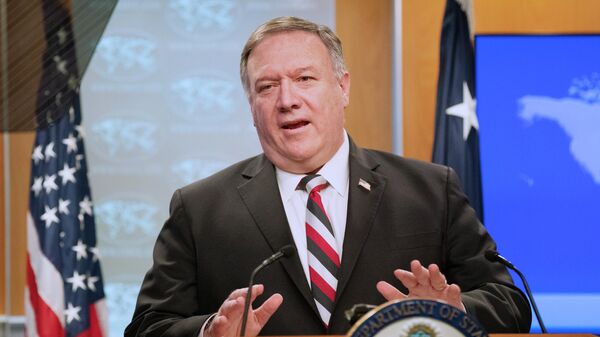 The US state Department has included the “Nord stream 2” and the second line of the “Turkish stream 2” in the new edition of the recommendations relating to the law CAATSA on countering Russia through sanctions. This was stated by Secretary of state Mike Pompeo.

According to him, the investments and other actions associated with the Russian export pipelines, the risk is under us sanctions.

He added that it is “a clear signal to companies involved in projects in Russia in malevolent influence” that the United States would not stand for it. “Leave immediately or there will be consequences”, he stressed.

The Department explained that the new edition provides for investments or any other business activity which is involved in the broader field of Russian energy exports via pipelines, including the “Nord stream 2” and the second line of the “Turkish stream 2”.

The state Department warned that the perpetrators of such investments or associated with such activity including, but not limited to, funding partners, and also involved in piping, vessels may become subject to sanctions.

CAATSA the law was passed in 2018, the recommendations of the state Department is subordinate legislation.

Russia has condemned the words Pompeo on the possible introduction of sanctions against the “Nord stream — 2”.

The representative of the foreign Ministry Maria Zakharova regarded these actions as political pressure for unscrupulous competition.

According to her, such threats demonstrate the weakness of the American system, which has no other tools in addition to power techniques.

A member of the Federation Council Konstantin Kosachev oharakterizovat the statement of the Secretary of state as a political blackmail. He pointed out the absurdity of the accusations of the US authorities — it turns out that Washington recognizes enemies over 120 European companies, most of which are from France and Germany are NATO allies.

State Duma Deputy Leonid Slutsky suggested that the lack of respect to any interests except their own, sooner or later will hit US like a boomerang.

According to state Duma Deputy Igor Ananskikh, thus Washington is trying to move supplies to Europe its liquefied natural gas, which is more expensive and it does not need European consumers.

The politician reminded that “Nord stream — 2” is not a project of “Gazprom”, with the participation of large European companies, and its purpose is to provide a supply of cheap gas to Europe.

The reaction of the operator

In Nord Stream AG 2 words Pompeo called the neglect of the interests of European industry.

The company noted that Dutch, German, Austrian and French companies have pledged to invest almost one billion euros. More than a thousand companies from 25 countries are fully committed to its completion.

The statement also stressed that the termination of the construction threatens the Europeans overpayments for gas in a few billion dollars.

Sanctions against the “Nord stream — 2”

In the U.S. Senate in early June, introduced a bill providing for the extension of restrictive measures that affect the construction of “Nord stream — 2”.

This is not the first attempt of the American authorities to prevent the implementation of the project. The bill on sanctions against the “Nord stream — 2” before that was introduced to the house of representatives of the Congress from Democrats and Republicans. At the end of last year, the United States adopted the defense budget, which specifies the restrictive measures against companies involved in the construction. Because of this participation in the construction of Allseas, the Swiss refused.

In Russia, noted that able to complete the construction of the pipeline.

Now the construction of the “Nord stream — 2” is suspended, because the foreign partners have curtailed activities due to the threat of us sanctions.