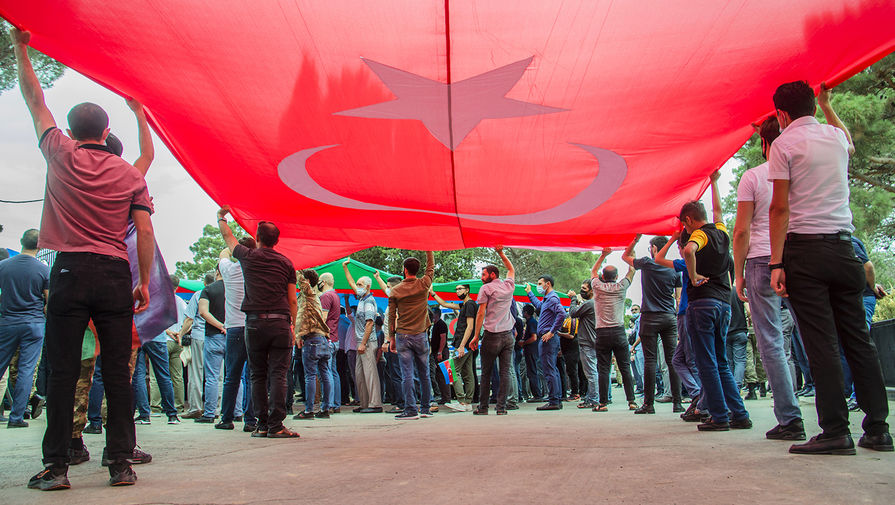 In Turkish social media hyping the theory of the relationship of the transformation of Hagia Sophia into a mosque with the Armenian-Azerbaijani conflict. The escalation of the conflict was supposedly “revenge” Moscow Ankara. Experts call such assumptions are fabrications, noting Russia’s attempts to stabilize the situation, which confirms the Kremlin’s official position.

Social networks and the media in Turkey is gaining popularity very controversial opinion, that the aggravation of the conflict between Armenia and Azerbaijan allegedly can be related to the conversion of the Istanbul Hagia Sophia, an important place for the Orthodox Christians around the world — in the mosque.

According to some Twitter users, the Armenian-Azerbaijani conflict can be seen as “Russia’s answer” to Turkey’s actions. Moscow allegedly contributed to the conflict, exerting influence on Yerevan, actually “ordered” the attack on the Azerbaijani side.

Clashes on Armenian-Azerbaijani border started on 12 July, they are in Tovuz and Tavush regions — a few hundred km from Nagorno-Karabakh, one of the main points of contact between the parties. As a result of clashes killed 11 of the Azerbaijani and two Armenian military officer. The blame for the shelling of the sides constantly blaming each other, which prevents the settlement of the situation.

The assumption is that the conflict has become a kind of “revenge” for the St. Sophia Cathedral, and indeed the theorists tie the current situation to the policy of Ankara in Libya and Syria.

This view is partially supported by Professor of Turkish University bahçeşehir Abdullah Agar in the TV channel Haber Global. According to him, clashes between Armenians and Azerbaijanis are in the key place of oil and gas pipes, leading to Turkey. Furthermore, Agar does not believe that the leadership of Armenia to independently decide on the escalation. Who exactly put pressure on Yerevan, the expert said, although opaque hinted again on Moscow.

In addition to this perspective, the Turkish ordinary people the impression that the conflict could be internal problems of Armenia. Among the popular theories stands the assumption that the Yerevan went on the conflict with Baku to distract people from the dire state of health and the state’s economy because of the pandemic coronavirus COVID-19.

As stated in conversation with “Газетой.Ru” senior researcher, Center for Caucasian studies, MGIMO Vadim muhanov, in General, the exacerbation can be explained by difficult domestic political situation, though not only in Armenia, but in Azerbaijan.

“Political elites of both countries are facing pressure, which pushes them to an adventurous and radical solutions — the consolidation of society on the “external enemy”, which in the end may become the perfect lightning rod”,

If we consider the assumption of “revenge” for the Hagia Sophia, then such a theory does not correspond with the official positions of Russia and Turkey on the Armenian-Azerbaijani conflict. So, obviously, Ankara is on the side of Azerbaijan in accordance with the principle of “one nation, two States”.

According to the head of the defense Ministry of Turkey Hulusi ACAR, the Turkish side puts the responsibility for the escalation in Yerevan, which is supposedly for many years pursued a policy of aggression, occupied Azerbaijani lands.

“We strongly condemn the attacks of the Armenian side into the Tovuz district of Azerbaijan. We Express our condolences to the family of dead Azerbaijani servicemen, and wish a speedy recovery to the injured. We will continue all possible assistance and support to the armed forces of Azerbaijan against Armenia”, — said Akar.

Moscow has expressed deep concern over the clashes and offered his mediation to resolve the conflict.

Press Secretary of the President of Russia Dmitry Peskov said that the Russian side appeals to both sides to show restraint and to comply with its obligations under the ceasefire.

From the perspective of a senior researcher of the Institute of world economy and international relations Victor Nadein-Raevsky, Russia is trying to balance the situation that the parties did not go beyond certain limits.

“Among the priorities of Moscow to prevent military clashes. Talk about the fact that Russia wants to annoy the Turks, pointless, we have plenty of other opportunities to answer,” — said the expert, “Газете.Ru”.

The idea that the Russian party may, at the expense of the Armenian-Azerbaijani conflict to take revenge on Turkey, — fiction, I’m sure Nadein-Rayevsky, Armenia and Azerbaijan, there are internal contradictions that they constantly use against each other. For example, in Baku say that the Armenian Prime Minister Nikol Pashinian so bad that he is willing to wage war for the sake of power.

In this case specifically the situation around the Hagia Sophia is quite difficult to bind to the conflict parties. The reaction in Russia to Ankara’s actions were different, in particular, a number of local Christian churches, including the Russian Orthodox Church, expressed his regret with the decision. The Kremlin is the desire of Turkey to transform a Cathedral into a mosque called an internal affair of the country.

“It’s important for us to Hagia Sophia as a monument a UNESCO world heritage site was saved in the form in which it is now, and that admission was open to those who come to Turkey. We have heard statements of our Turkish colleagues , that the Hagia Sophia will be maintained and that access will remain open. This is welcome”, — said Dmitry Peskov.

The struggle in the region?

At the same time, the reverse side of such theories raises another question — is there a confrontation between Russia and Turkey in the Caucasus, particularly through the conflict between Armenia and Azerbaijan, which allegedly controls Moscow Yerevan and Ankara in control of Baku.

From the point of view Vadim Mukhanov, currently talking about it is not necessary, and open confrontation between parties in the region ended in the XIX century.

“In the last times of the Caucasian territory between the parties were divided on the basis of Russian-Turkish war of 1877-1878, the Russian Empire received the Batumi district, the territory of Adjara. During Soviet times, Turkey to the region is not claimed and officially recognized part of the Soviet Union”, — said the expert.

Turkey over the last 30 years has become a serious player in the Caucasus, promoting its soft power, in particular due to its high schools in the Northern and southern parts of the region, said Mukhanov. Azerbaijan is a key ally of Ankara in the Caucasus, they are in a so-called joint military-political Alliance.

“In some matters the views of Turkey and Russia differ, but not the player which can start or stop the Armenian-Azerbaijani conflict in one click. Moreover, such an interpretation arises in the discussion of the events of April 2016, then on Karabakh line of contact was unprecedented aggravation and one of the factors of detonation can be called a crisis in Russian-Turkish relations”, — concluded the expert.

With turn Nadein-Raevskii States that Turkey can boast a full impact on Azerbaijan. According to him, the Armenian-Azerbaijani conflict greatly hindered Ankara when she was actively trying to get into the European Union.

“In Ankara was even thinking to eliminate these relationships to reassure Brussels and to improve its conditions for accession. However, this did not happen because of the position of Azerbaijan on the territory of Azerbaijan began mass demonstrations with the burning of Turkish flags,” — said the expert.

Thus, when considering the current situation it is not necessary to forget about personal problems of Armenia and Azerbaijan, which in fact became the cause of the deterioration of the situation. Cooperation between Russia and Turkey, on the contrary, in recent times is at a good level, excluding a number of controversial issues in Syria and Libya.