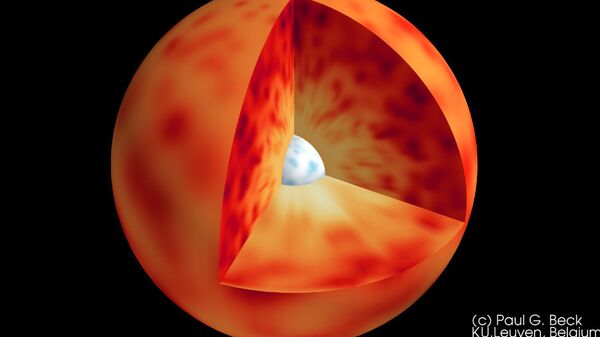 Astrophysicists have found that about eight percent of the red giants — much larger than previously thought — have dark areas on its surface, and these stars rotate faster than their counterparts. The study is published in the journal Astronomy & Astrophysics.

One of the most striking features of the Sun — the presence of sunspots, relatively dark areas compared to the rest of the surface, some of which are visible from Earth even without magnification. Many other stars like our Sun, also covered with spots, but for larger stars belonging to the class of red giants and being at the late stage of stellar evolution, it has always been considered a rarity.

Researchers from the Institute for the study of the Solar system max Planck in Germany in cooperation with colleagues from USA and France, have studied the measurement data of about 4500 red giants, was the space telescope of NASA from 2009 to 2013 and found that these stars — at least eight percent.

In the second phase, the researchers investigated the question of why the spotted giants spin so fast. Dark spots on the surface of red giants is a reflection of strong magnetic fields on their surface. While red giants are generally considered as a slowly rotating star, the ones which have star spots, are an exception.

The authors conducted a comprehensive analysis of various causes of short rotation periods of stars including: forced synchronization with the other, blastoconidia star, the absorption of the star or planet and high initial speed.

“To answer this question, we needed to determine as many properties of stars, and then draw the General picture,” says lead author Dr Patrick Holm (Patrick Gaulme).

In the Observatory Apache point, new Mexico (USA) researchers studied how the wavelengths of star light are changed over time. This allowed us to make conclusions about their exact movement. Scientists also considered the rapid fluctuations in brightness that are slower are caused by stellar spots. More rapid fluctuations reflect pressure waves propagating through the interior of the star to its surface.

As a result, scientists have concluded that staining requires a combination of deep convection and rapid rotation of the star. During the Dynamo process arising from the interaction of the conductive plasma convection currents of nature and forces of rotation, generates a magnetic field of the star, which is then “washed” to the surface. In some places, especially strong magnetic fields allows the hot plasma to flow upwards. These areas look dark and look like star spots.

“Rotation and convection are important factors in the formation of surface magnetic fields and star spots — presented in a press release the Institute for the study of the Solar system max Planck words of one of the authors of the study Dr. Federico Spada (Federico Spada). Stars with convective outer layers are capable of generating surface magnetic field by Dynamo action, but only when a star rotates fast enough, the magnetic activity becomes detectable”.

The analysis showed that about 15 percent of an anomalously fast stars belong to close binary star systems, usually consisting of a red giant star with a less massive companion.

“In such systems, the speed of rotation of both stars is synchronized in time, until they fall in unison, like a pair of skaters — explains Holm. — Thus, a slower red giant is gaining momentum and rotates faster than without a companion star”.

The other 85 percent patchy red giants, according to astrophysicists, to gain more speed in a merger with another star or planet, or because they were originally high speed of rotation.

The authors hope that after the launch of the space telescope PLATO, the European space Agency they will be able to extend their research to all regions of the milky Way.