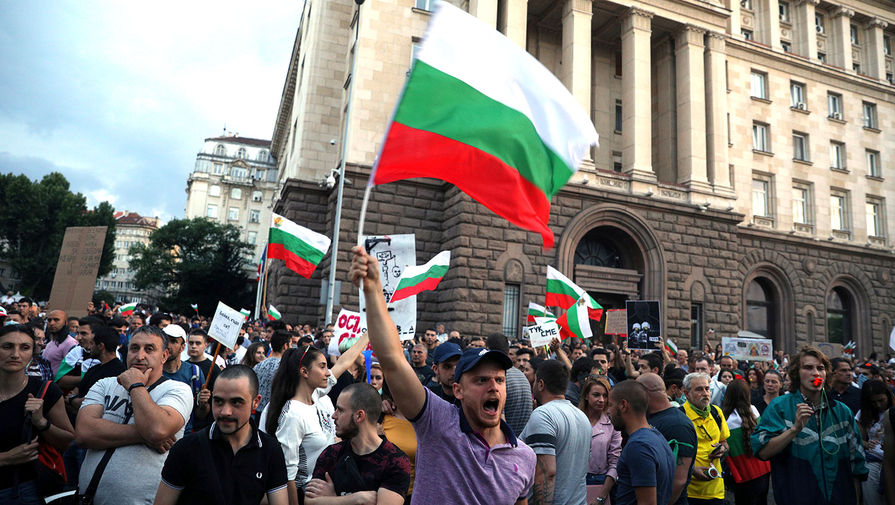 In Bulgaria for the past week of mass anti-government demonstrations. On the streets of Sofia and several other major cities left thousands of protesters. Citizens accuse the government of corruption and “actions of a mafia nature” and demanded the resignation of the Prime Minister. They are supported by the President of rumen Radev, who for many years in conflict with the government. In resignation are already sent three Ministers, but the government does not intend to resign.

In Bulgaria on July 15 renewed mass anti-government protests. Demonstrations took place in Sofia and other major cities — Varna, Plovdiv, Burgas, Veliko Tarnovo, Ruse, Blagoevgrad, Stara Zagora, Pleven, Gabrovo and Kyustendil. On the streets of the capital left thousands of people to protest against corruption in government.

The protests lasted for a week, the reason for them began searches in the administration of the President rumen Radeva, which took place on 9 July. On the same day, the interrogation was caused by the President’s adviser on security issues Milush Elijah and the Commissioner against corruption Plamen Uzunov.

On 14 July, the protests escalated into violent clashes. In social networks spread the footage of the abuse of power by the police. The Internet publishes stories beaten by law enforcement participants. One of them says that the police took selfies with those who used force.

The Ministry of the interior, however, denied that the police had exceeded the authority under detention. The General Prosecutor of Bulgaria Ivan gechev stated that he supports the actions of law enforcement officers, and the protests he called “paid”.

Meanwhile Gesheva to the resignation of the entire Cabinet of Prime Minister Boyko Borisov urged the President of Bulgaria rumen Radev. The same call and the protesters.

The current anti-government protests have become the biggest, after a wave of anti-monopoly demonstrations in 2013-2014. People take to the streets with slogans “EU, are you blind?” and “I want to live in Bulgaria”.

Stocks of the opposition socialist party, and the President of the country, which is considered one of the most prominent critics of the Bulgarian government gives full support to the protesters. However, Borisov has already ruled out the possibility of the dissolution of the government. Instead, he called to overcome the crisis “jointly”, including with the assistance of the opposition.

On Monday, Deputy Prime Minister Tomislav Donchev in an interview for Nova TV confirmed the commitment of the ruling party “GERB” (“Citizens for European development of Bulgaria”) to stay to the end. However, some concessions, the government still went on, dismissing the Ministers of Finance, economy and internal Affairs.

“Borisov is no longer connected with reality. It’s time to relax. Requires early elections, said on July 13 in the national television, the former Minister of justice and leader of the opposition party, “Yes, Bulgaria,” Hristo Ivanov. — We are ready. Citizens are willing”.

Party Ivanova has not passed in the Parliament after the 2017 elections, since this political power requires early elections.

It Hristo Ivanov has actually provoked the protests in Bulgaria. July 7 published a video in which a politician visits the house of Ahmed Dogan, influential oligarch and the former leader of the party “Movement for rights and freedoms”, which represents the interests of primarily the ethnic Turkish minority in Bulgaria. The house policy is located by the sea on the private beach.

Ivanov argued that the construction of the Villa on the coast was illegal, as was the transfer of the beach property in the private Dogan. The influential politician is one of the supporters of the government of Borisov. Ivanov together with his staff set on the beach of the Bulgarian flag, but soon between them and the guards oligarch fight began. The police demanded that the team Ivanov’s documents, while the politician claimed that they can be on the beach legally, as this is public property.

The video quickly gained popularity and sparked the first protests against the illegal construction on the Bulgarian coast, which soon became anti-government in nature.

The next day, the President of Bulgaria said that the guard who let finding Mann on the beach — it’s the officers of national protection, which is responsible for the protection of the President, Prime Minister and other dignitaries, and the Dogan does not have the right to use their services.

At first glance, what is happening in Bulgaria seems to be the result of confrontation and Borisova Radeva. President long time conflicts with the Prime Minister and the attorney General, calling the Cabinet a “mafia” government.

Boyko Borisov Radeva accused of inciting hatred and trying to derive political benefits by the split of the country. However, massive protests demonstrate the existence of deeper problems in the state. And the fact that the reason for the protests was a reminder of the illegal privatization of the beach, supporters of the Prime Minister, also indicates the intensity of the disturbance level of privilege and corruption in government ranks.

The opposition accuses Borisov in the “capture state” and suppression of freedom of speech in the last 11 years. The Prime Minister began his career as a personal bodyguard of the leader of socialist Bulgaria Todor Zhivkov and the last king of the country of Simeon II.

Moreover, the government of Borisov is not the first time confronted with scandals involving corruption. Recently, for example, revealed that high-ranking officials “coat of ARMS” bought luxury apartments in Sofia for a price significantly below market. Investigation on the supporters of the Prime Minister, money laundering abroad and the prosecution of influential political rivals, was escorted Borisova career in recent years.

Headache Borisov added the extension in 2017 for the post of President of the opposition socialist rumen Radeva. Since then, almost every scandal one way or another, assumes the contours of their personal confrontation. So, last month in the online published photos of a sleeping Prime Minister about a gun and a large amount of money.

Borisov called the pictures fake and accused the President of their publication. Radev, however, denied that is relevant to the scandal. On protests impact and fatigue citizens from pandemic COVID-19, and fear of its economic consequences, in the light of which the news about the luxury in which you live the people around the Prime Minister, have a more tangible effect.

In February rumen Radev made a statement in which he criticized the government for corruption, lack of reforms and the collapse of the state stating that deprives him “of his trust.”

Bulgaria is one of the most corrupt countries in the European Union. In Brussels believe that there are still problems with the rule of law.

Recently, however, the Borisov government has received support from the Commonwealth, which could represent their constituents as a personal achievement. July 10, Bulgaria joined the European exchange-rate mechanism and the European banking Union, which is the first stage of the country’s accession to the Euro zone.

If Sofia will meet other economic criteria, within three years to join the single currency of the European Union.

Borisov could expect that such developments will become a symbol of progress for the Bulgarians. However, the victory celebration was marred by coming from Sofia, shouting “resign!” and “Mafia!”