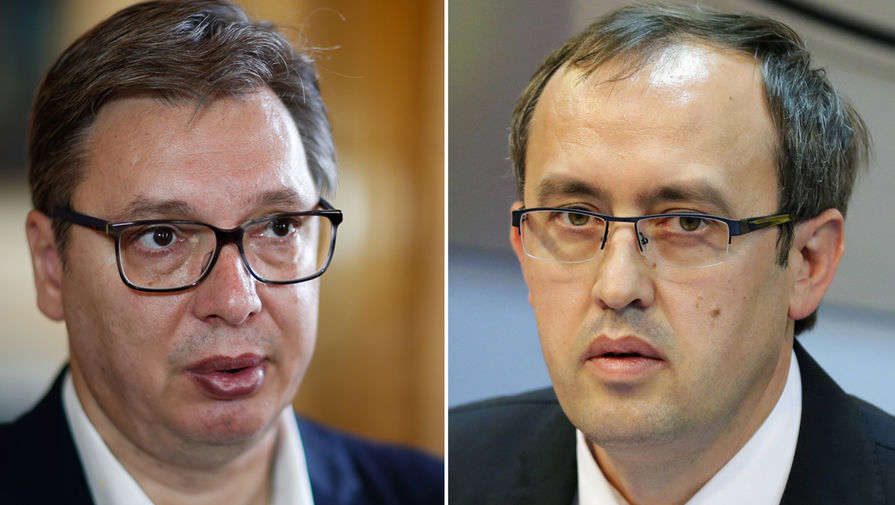 In Brussels held talks with President of Serbia Aleksandar Vucic and Prime Minister of Kosova Hoti Avdullah. According to experts, even the very fact of this meeting can be perceived as a positive signal. However, while talking about some achievements not necessary. Is there any chance of reconciliation and what the future holds for “the powder keg of Europe” — in the article “Газеты.Ru”.

As noted following the talks, the Serbian leader, meeting in Brussels “was difficult” and the parties were able to touch on only “two or three questions.” Belgrade and Pristina discussed the problems of missing persons, internally displaced persons and economic issues.

“I think we prepared well for the meeting, we had it and we best represented the interests of Serbia. We were serious, responsible, and in the course of the dialogue it was clear that we really started to talk and to make progress,” said Vucic dialogue.

This conversation marked the beginning of the resumption of the dialogue of Pristina and Belgrade on a comprehensive normalization of relations, which was stopped for almost two years.

The dialogue stopped completely when in November 2018 Kosovo unilaterally adopted the decision to impose 100% duties on goods from Serbia and Bosnia and Herzegovina.

It is also noteworthy that the dialogue has taken place with the active mediation of the European Union, although more recently the role of Balkan peacekeepers was claimed by the United States. June 27 in Washington, had held negotiations between the Survived and the President of the breakaway Republic of Hashim Thaci.

These plans collapsed on June 24, when the Hague special Prosecutor’s office for Kosovo, accused the leader of the Kosovars for war crimes. Following Thaci’s trip to Washington was canceled and Avdullah Hoti, citing the need to understand the situation with the President.

In Kosovo it was said that the accusations against Thaci associated with the planned U.S. talks.

“Given the time and circumstances — just a few days before the meeting at the White house — is no doubt that it was an accident,” — said one of the leaders of the Democratic party of Kosovo Kadri Veseli.

Indeed, Washington recently managed to intercept the Kosovo agenda, especially given the failure of the EU in this direction. At the end of last year, the President of the United States Donald trump appointed representative for Kosovo, Richard Grenell, who previously held the post of Ambassador to Germany.

The mediation of Grenelle agreement was reached on the resumption of direct commercial flights between Kosovo and Serbia. Thanks to his efforts, Washington was able to influence the positions of Pristina and to seek the abolition of duties that poisoned the already very complicated relations in the Balkans. And it was he who initiated the negotiations, which was to be held in Washington. And, by the way, despite their abolition, Grenell not going to give up.

On Twitter, the politician stated he is sympathetic to the decision of the Kosovo President and Prime Minister and is currently working towards the rapid establishment of a new date of the meeting of the parties in Washington.

But the European Union, exasperated by the loss of control over the situation, was quicker.

“We can say that Europe is trying to intercept at the USA the Balkan agenda. And it is quite logical. In part, this attempt failed because in the current environment, even the very fact of the meeting can be considered the result”, — noted in conversation with “Газетой.Ru” the expert of Institute of Slavic studies George Engelhardt.

But in spite of himself, positive that catches the eye is that unlike all the previous and failed meetings, the parties bypassed the status issues. At least none of the negotiators of the relevant discussions not said.

“Although, one must understand that the Americans and the EU stand for achievement by the parties of a universal and legally binding normalization of relations. De facto we are talking about the recognition by Serbia of Kosovo’s independence,” — said the expert.

And really. As noted before, the high representative for foreign Affairs and security policy of the EU, Josep Borrell, is also actively involved in the negotiations, namely mutual recognition achieves Brussels.

The agreement between Kosovo and Serbia would open the way for the normalization of life in the unrecognized state, and would facilitate Serbia’s path to the EU.

“If Kosovo and Serbia will sign a legally binding agreement that fully resolve the legacy of the past, and the remaining EU countries will have no reason not to recognize Kosovo,” said Borrell, expressing confidence that “the main reason for rejection is that Kosovo got independence, not the fact of independence.”

Formally Vucic, who had just won the elections and additionally monopolized the control of Parliament and the local authorities seemed to have complete freedom for making any decisions on the status of Kosovo. But the reality was much more complicated.

“We see that just two weeks after the triumphant victory in the elections one careless decision — attempt re-introduction of the quarantine provoked the country the wave of indignation and protests, which lasted for several days. Moreover, these protests took place including under the topic of Kosovo. In the end, the government has just triumphantly won the election, was forced to completely abandon their plans,” emphasizes George Engelhardt.

The idea of recognition of Kosovo is very unpopular in Serbia, which limits Uucico space.

Now the head of state begins to push the opposition. “For the Serbian state is unacceptable the talk about signing a “legally binding agreement” between Belgrade and Pristina, which our government would recognize the independence of Kosovo lagoudera and would agree to its admission to the UN. Judging by the statements of the leaders of Germany and France, which act as the main organizers of the dialogue, this is the main goal”, — said the leader of the Serbian opposition parties “Doors” Bosko Obradovic.

According to policy, Serbia must make the connection to the talks. And this proposal is not by accident. As noted by Georgy Engelgardt, the position of Russia is another limiting factor on the Serbian leader. Moscow in recent weeks has consistently stressed its commitment to UN security Council resolution that blocks any recognition of Kosovo’s independence.

“The Russian position on Kosovo remains unchanged, I would like to emphasize this. Advocate for the achievement of the Belgrade-Pristina viable and mutually acceptable solution based on the resolutions of the UN security Council 1244,” — said the representative of the foreign Ministry of Russia Maria Zakharova.

Yet due to these factors the position of the President of Serbia remains firm. Following today’s talks, he told reporters: “Hoti said “two States” 20 times, and I replied 20 times — one state and its Autonomous province”.