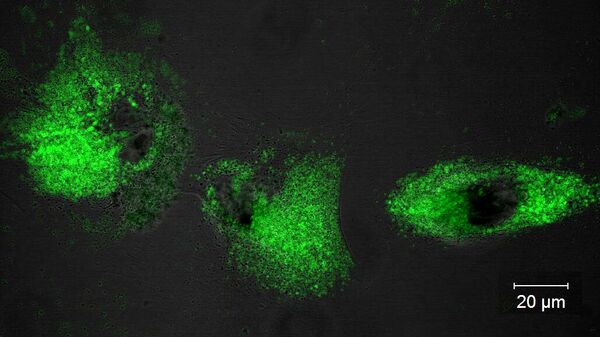 Russian chemists in cooperation with German colleagues have synthesized compounds that are able to highlight the contrast with the calcium ions in solutions, biological tissues and even within cells. The method will find application in the treatment of bone diseases and in non-invasive diagnosis of different tumors associated with excess risk of soft tissue calcification. Description of the development published in the journal Sensors and Actuators B: Chemical.

The study was conducted by staff of the Department of chemistry and technology of biomedical preparations RCTU named after D. I. Mendeleev, in cooperation with the Institute of gene biology of RAS, Institute General physics of RAS, as well as the Technical University of Chemnitz and the University of Erlangen-Nuremberg in Germany. The work is executed at support of Russian science Foundation grant.

The resulting compounds consist of two functional groups — bestsvetny serves as a receptor for cations, and naftalina intensively fluoresces after exposure to laser radiation.

Bisphosphonate group by virtue of its geometry is well contacted with calcium ions and is very promising for non-invasive diagnostics in medicine and biology. For example, increased concentration of calcium in the breast tissue, kidneys or blood vessels may indicate the presence of various pathologies, including malignant tumors. Preparations on the basis of use of bisphosphonates for therapy of bone diseases since the 1980-ies.

According to the authors, bisphosphonate groups with fluorescent labels based on naphthalimides can be used as markers to search for calcium. Fluorescence microscopy has high sensitivity and clarity, and optical markers are much safer and cheaper compared to radioactive labels.

“To us this optical platform no fluorescent bisphosphonates not created — presented in a press release quotes first author, associate Professor, University of Maxim Oshchepkova. — We got a molecule that goes where there are problems with bone or soft tissue, selectively binds to calcium, and can then be detected via the fluorescence label is excited by laser radiation. Turns out this receptor, which is coupled with calcium and illuminates it.”

“Calcium is very important from the point of view of biochemistry cation — says another author, associate Professor, University Sergey Tkachenko. — Its concentration is very different inside and outside the cells of multicellular organisms, and this tied many different physiological processes. But calcium is difficult is detected by other methods, in addition to fluorescence, especially if you want to track the dynamics of the process and not to destroy tissue. Therefore, our work can be used by other research groups as a new tool for exploration and visualization of calcium processes, in particular physiological”.

The possibility of new molecules, scientists have confirmed a series of experiments, including cell cultures. They studied how stable fluorescence in a wide range of pH conditions close to physiological, and also estimated the intensity of binding of new molecules with calcium ions.

The researchers then tested the diagnostic ability of the new compounds in the laboratory. They introduced synthetic substances in culture of human fibroblasts and showed that bisphosphonates penetrate through the membrane into cells without damaging them, and there are associated with calcium ions, then allowing them to visualize fluorescence. While in the cell nucleus bisphosphonates do not penetrate, making their low toxicity.

In another experiment, in addition to fibroblasts, the mixture was added hydroxyapatite — the main mineral component of bone tissue. In this case, bisphosphonates have already penetrated into cells and was connected with a more available calcium on the surface of hydroxyapatite. Thus, the authors showed the possibility of contrasting the performance of the bone in the background soft tissues.

In the near future, the researchers plan to chemically modify materials so that they fluorescerende not in the visible range, as of now, and in the area of IR radiation, which is much better penetrate through biological tissues that will greatly enhance diagnostic capabilities.