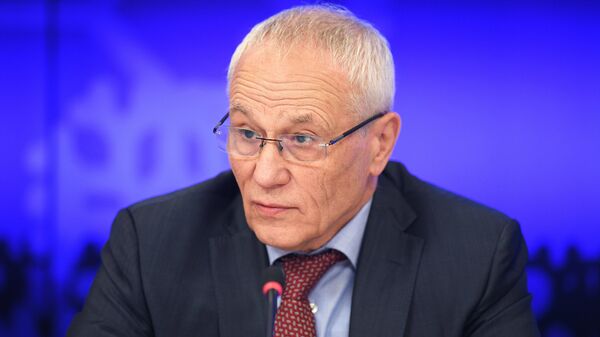 Union state Secretary Grigory Rapota told reporters at a press conference dedicated to the Day of the Union state within the framework of XXIX international festival of arts “Slavianski Bazaar” in Vitebsk, on major projects that are planned, and that interested him during his visit to the Vitebsk region, reports Sputnik.

“Usually my work at “Slavianski Bazaar” consists of two parts: traditional and non-traditional. In the first I attend a concert, hold a press conference and various meetings. The unconventional part is the ability to meet with the Vitebsk region, its industry, agriculture, and to make acquaintance with benefits Union relations” – are the material words Rapota.

This year the Secretary of state went to Orsha, visited the new logistics centre, looked an upgraded runway and a new air terminal, got acquainted with work of the Dubrovno flax plant.

“We have been trying to establish cooperation between Belarus and Russia in this sector, but not yet beyond. Here went and tried to understand, because the topic of the development of flax cultivation is constantly rising and deputies, and financiers, and the various professionals understand that the industry is in decline,” – said Rapota.

He noted that the Union state is a certain budget that you can use. But if the standing Committee comes to the professionals from other fields and know what they need the money, but can also articulate that the flax clear of the programs yet, she said.

According to him, the officials can not “find the most important link”, which will “pull” the industry. In 2013 formulated the program of the Union state on linen, but the Ministry of Finance and economy of the two countries the document is not supported. “To understand how to put the industry on its feet, we held a series of consultations with the Russian manufacturers, I visited the flax mill in Belarus, where he received a lot of interesting information. Now we will try to generalize and understand where your help is needed,” said the Secretary of state.

He stressed that at the moment entails two problematic points: the formation of the consumer market – there is a lot to learn from foreign colleagues, as well as growing varieties that have greater yield.

Rapota noted that the standing Committee is looking for new projects to be implemented. Now the Federal government is implementing 12 programs – some of them will be completed this year and another part the next. “We need to fill this list, and even to increase it. We therefore urge to contribute and suggest ideas,” said the Secretary of state.

He stressed that the proposals can come not only from ministries, but also from groups and from citizens. Interesting projects will be considered and supported, because the interaction between the two countries is an opportunity to better know and understand each other.

Rapota cited the example of the Brest memorial is one of the major projects, which implements the Federal government, which constantly open new exhibits.

“This is a difficult and painstaking work of more than one year. The project involves Russian and Belarusian restorers, Museum workers, historians and other specialists. Despite the fact that it allocated a lot of money, the project will long continue,” said the Secretary.

The officials of the Union state there are ideas for the implementation of joint projects in the medical field, which is especially important now. In addition, there are plans to implement a program of radiation safety.

Told Rapota and the most memorable for him from the project – mutual recognition of visas.

“This problem was a long time. If the citizens of our countries can freely cross the common border, then the visitors, who had a visa either Belarus or Russia could cross the border only through checkpoints, and we have a little,” he said.

First Permanent Committee of the Union state proposed to make the visa of Belarus and Russia on the type of Schengen, to receive it was able to move freely across their common border. But then the Belarusian side submitted a draft on the mutual consideration of visas, which technically was much easier to implement. And after a long day of work, this year the program was implemented.

The Secretary of state also told about the project, which is still in the idea stage, but it can be implemented.

“The issue of high-speed and high-speed railway St. Petersburg- Hamburg, which runs through the Pskov, Vitebsk, Minsk, Brest region and further to Poland and Germany. The idea of this project was formulated in the summer of last year Valentine Matvienko. And the longer we work on it, the more we realize that it should be implemented,” – said Rapota.

According to him, are particularly interesting in this project two aspects. First , it is a high-speed passenger rail trains where you have to accelerate up to 350-400 km/h. Secondly, it is very important that this project is not budget, it would be funded at the expense of its members, financial institutions. Budget money will be minimal.

As the Secretary said, the project fits perfectly into the plans of the Russian government on the creation of a network of highways connecting the Eastern and European parts of the country.

Rapota reminded about another not less ambitious project “Meridian”, moved recently from a dead point, – a highway that would connect China and Europe. According to the authors, the new highway should take some of the load of the Suez canal, the Northern sea route and TRANS-Siberian railway.

“The road was planned long ago, in 2009, but could not move until the project handed over to private investors, and then building gone. Already done documentation conducted by the land acquisition. It is planned for 2024, to connect with Belarusian roads”, – shared his plans Rapota.

In conclusion, the Secretary of state noted that now in full swing preparing for the seventh forum of the regions of the two countries. There was the first organizational meeting, forming the agenda and created a working group for its implementation.