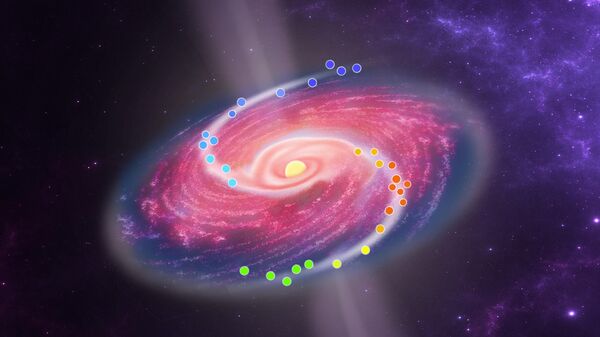 Russian astronomers working with colleagues from other countries first discovered the spiral flow of the substance, the feeding of a massive star, as well as new molecules, creating the maser radiation. The results of observations published in the journal Nature Astronomy.

Massive stars — stars with mass greater than eight solar masses that end their lives with a supernova explosion, play a crucial role in the evolution of galaxies. For a long time scientists could not find an explanation of how the material that feeds these young stars, overcomes a huge radiation pressure.

Astronomers of the Ural Federal University (Urfu), together with colleagues from the Center for astrophysics of Guangzhou University in China and another from nine countries, have studied the process of formation of young massive star G358.93-0.03 (G358-MM1), which has about 12 solar masses and located at a distance 22 thousand light years from us.

It turned out that the disk of gas surrounding the protostar has a spiral structure associated with the rotation — substance around the star moves on a spiral. The disk is constantly increasing due to gas and dust falling in from the distant shells. Currently, the disc has a diameter of 1340 astronomical units.

Scientists have created a mathematical model, which previously calculated the trajectory of the substance. Their assumptions are confirmed by the observations at the telescopes.

What substance can fall on a star in a spiral, astronomers assumed earlier, but the register did it for the first time — thanks to an unusually bright maser outbursts accompanying episodes of accretion — income new substance.

Masers amplifiers of radio waves due to processes of stimulated emission. Formed in the vicinity of massive stars some quantum transitions of molecules work as masers and force these objects to glow in thousands, millions and even trillions of times brighter at some frequencies.

On the basis of information about location and velocity of the detected masers, the scientists not only modeled the basic shape configuration, but also came to the conclusion that matter is flowing from the outer disk areas to the inside along the spiral arms. From there it gradually feeds the protostar.

“The article presents the results of several discoveries — are in the press release of Urfu the words of one of the leaders of the study Director of the Kourovka astronomical Observatory of Andrei Sobolev. — We found three new species of molecular masers — quantum transitions of the heavy water solanova acid and methanol isotope. Observations showed that the bright glow of new molecular masers — a short-term phenomenon, which lasts for about one month and probably is the result of the accretion of the flash that happens when a star falls, a massive clot from the surrounding substance. And most importantly, we have shown that the material around a massive star falls on her spiral”.

In combination with theoretical models, astronomers for the first time established a direct correlation between the change in luminosity and the accretion of individual packages of a substance with an unstable massive disk.

“New types of masers helped to simultaneously track both the accretion flash and spiral flow caused by disk fragmentation of a massive star and, thus, have provided observational evidence of the connection between them. In addition, this suggests that disk accretion can be considered a common mechanism in the formation of stars with small and large masses,” says the second head of research Professor at the Centre for astrophysics of the University of Guangzhou Soup Chen.