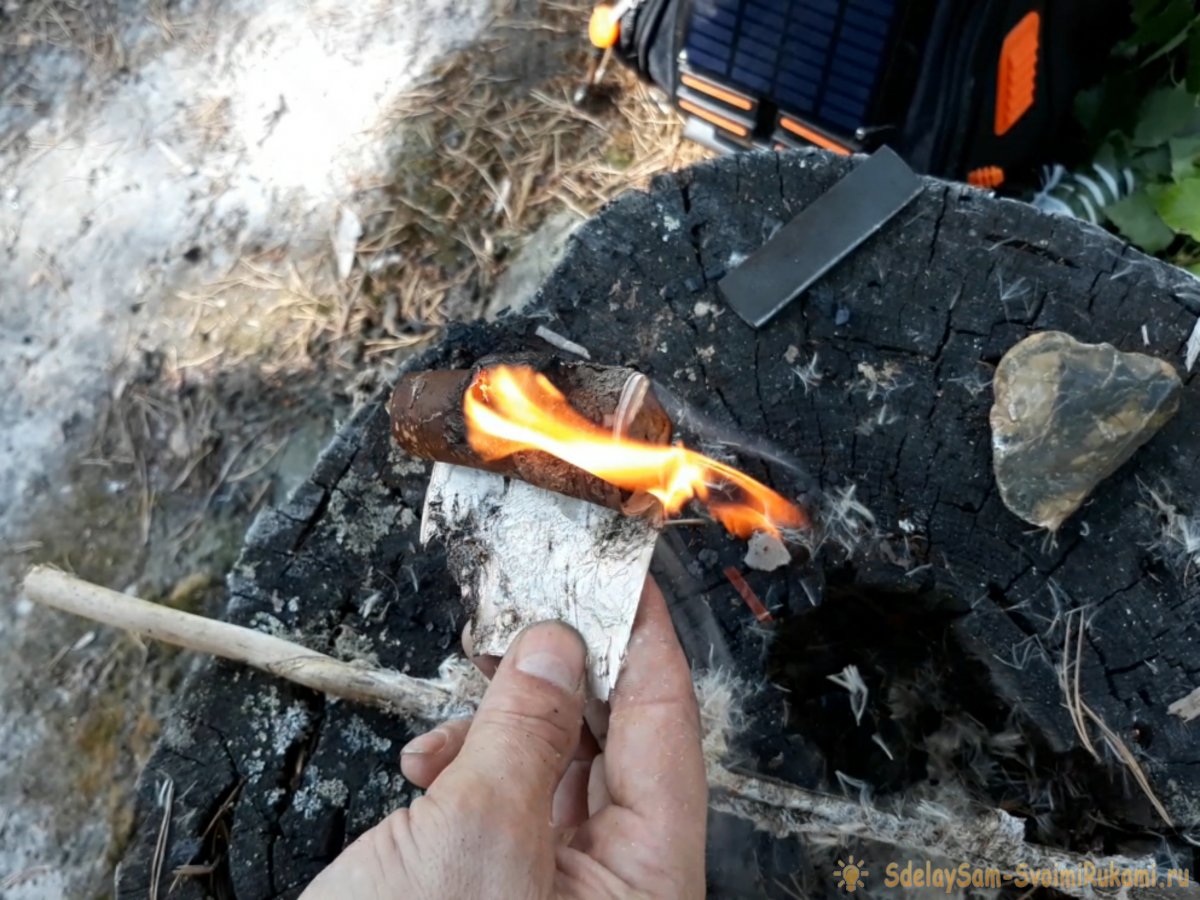 Items with which to make fire, in our time, rife. This match, as usual, and hunting, thermite, long burning, etc. the Lighter as conventional gas and gasoline and electronic. A variety of flint, solar prisms, chemicals, and other such things. But how to make fire with nothing of this? Situations in life are different. There are several ways to make fire, with absolutely no funds for this purpose. In this specific example, we only need a piece of metal and stone which you can pick up anywhere.

Getting fire from a spark

What is the spark suitable to ignite the tinder can knock two stones – no more than a stereotype! Need metal! In our time, metal objects surround people everywhere. The ancient people who discovered fire, learned over time on their own to make fire with a rock and a piece of iron pyrites – a mineral with high iron content. It is also called pyrite. Metal in those days, for obvious reasons, was not, because instead successfully used a piece of this mineral. This method can help and some modern mushroom, or the collector of berries, had the temerity to get lost. This category lovers of active recreation are at the most risk of getting lost, because these people are constantly forced to move from place to place in search of mushrooms and berries. In contrast to hikers who have already paved the route on the map, and have a precise goal, as well as the necessary gadgets to determine the exact location, the pickers often go into the woods with only a knife and container for desired wild plants. Lost in a forest, with no means of making fire (or lost them along the way), has much fewer chances of quick recovery, more Thrifty than his colleague. The fire is good protection from the possible attacks of wild animals. Then, it’s a warm night, and more acceptable for human food. Well, in the end, it is a way to attract the attention of search teams, in case You miss home. The task is significantly simplified if available a knife will be made of good steel weapons, with a high content of carbon and chromium. Such a steel when they hit the stone sparks better than conventional iron. The selection of the stone should also be approached sensibly. Soft rocks, like gravel, categorically will not fit. Need a hard quartzite. It could be granite, and plain white or transparent pebbles. In General, the solid rock! Ideally, of course, flint! Flint is most often found on the banks of the river, Creek, or pine forests, in the roots of wind-blown old pine trees. 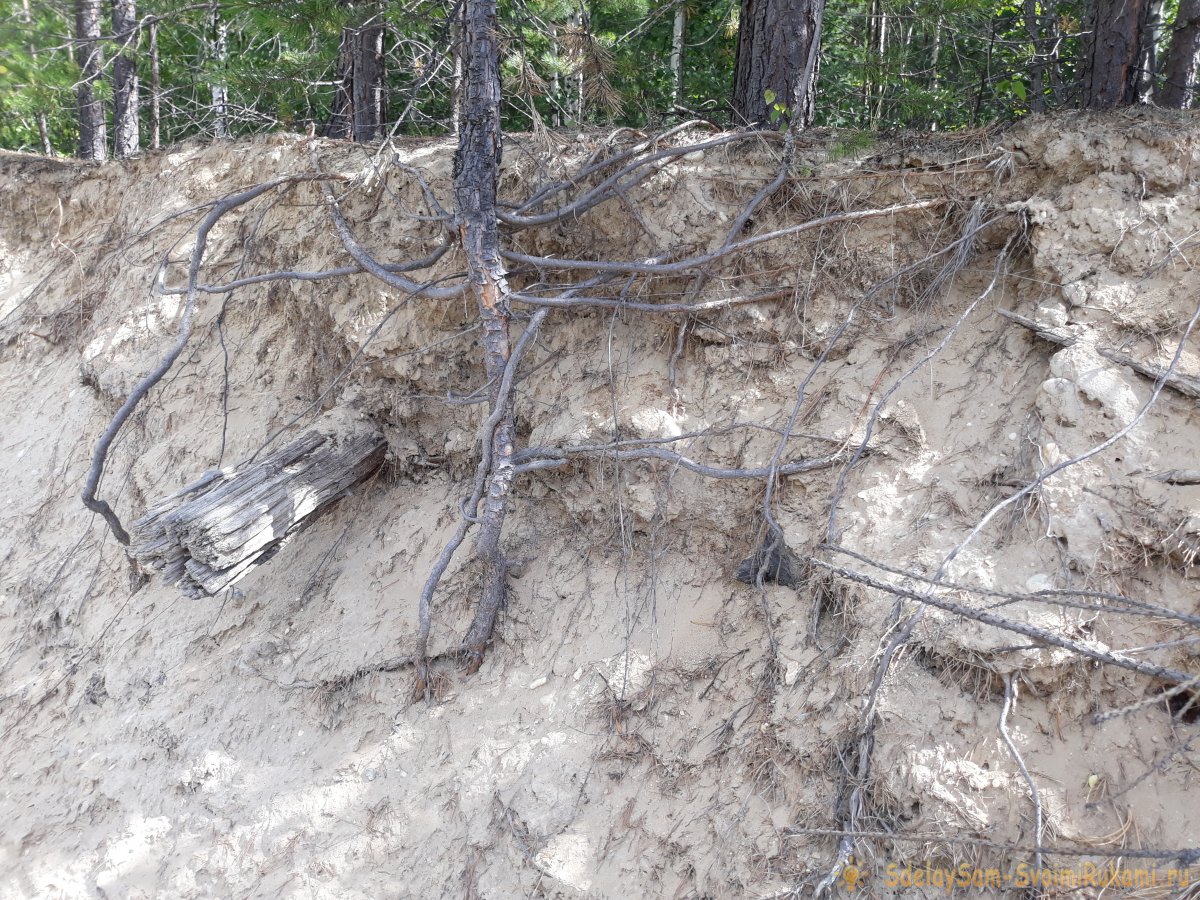 To distinguish flint from other rocks of the quartzite is very simple – he often has a creamy-grey or creamy coffee shade with a matte surface on the chip. Some ways it is similar in appearance to boiled condensed milk. Only petrified. The color depends on the region; the North region, the darker is the shade. But flint catches and two tone, and three or even a whole palette of different shades – from beige to dark gray, almost black. 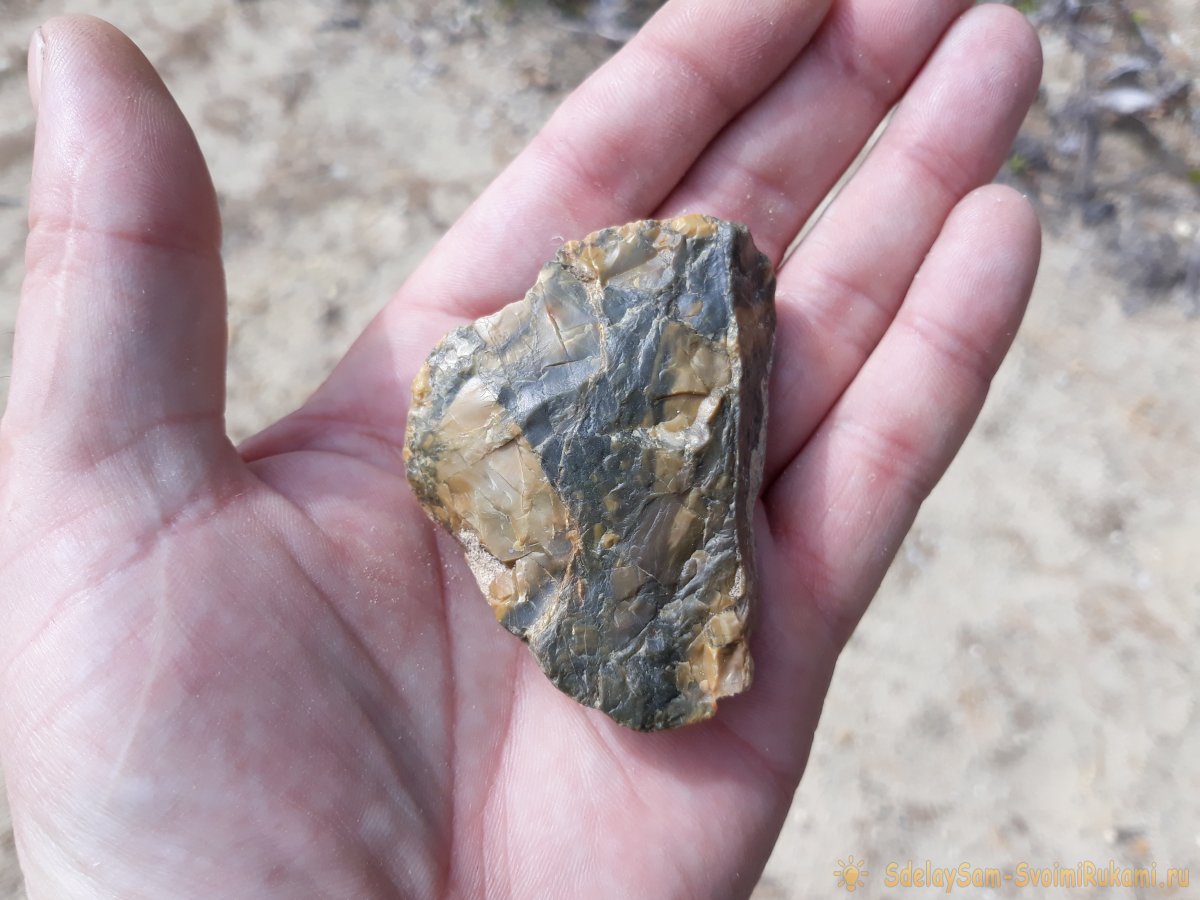 One thing is the same; matte, oily luster on the cleavage, and sharp as a razor, clean edge. In General, you can’t go wrong! Next you need to prepare tinder and kindling. As tinder can be used dry last year’s cattail – like leaves and fluffy heads. As for the birch polypore, or dry moss, worn in the soft dust. Wood dust is also nice, it can get from the old stump. In General, everything will be fine to smolder from the falling sparks. For coarse kindling, after the appearance of the flame, you can use dry pine needles, leaves, twigs, cones, etc. For example, in the video, instead of a knife I’ll use a piece of ordinary cheap file; don’t want to scratch the blade unless absolutely necessary. Steel file and a good knife is nearly identical in hardness, and composition – and here and there a large carbon content, so that the spark from a flint they will be the same. So, when absolutely necessary, you can use the knife – I think unlikely to find in the forest another metal object. And as tinder take, again for example, the available – last year’s cattail! 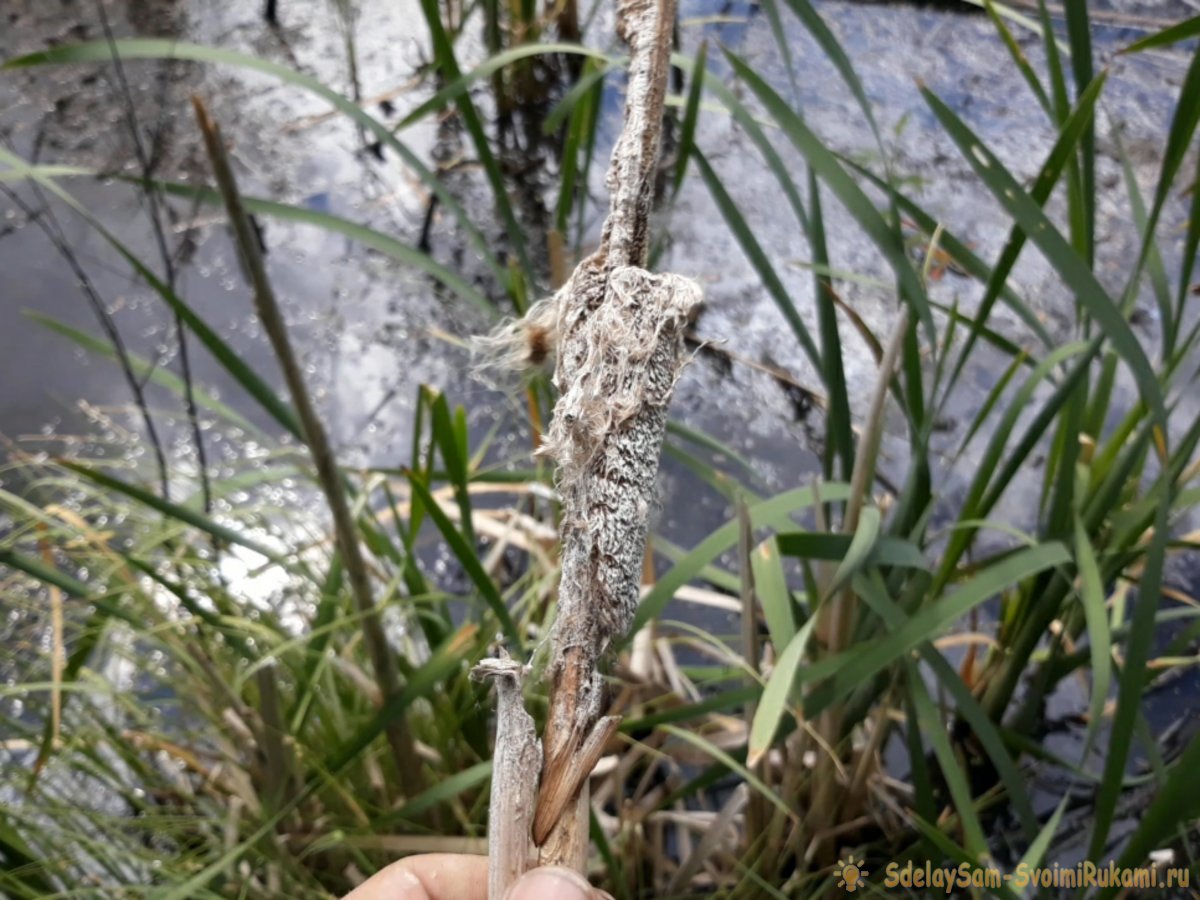 Oh, and another important point: in order to spark better engaged in on the tinder, that tinder to RUB on the charred surface. For example, scorched by the lightning tree. Or at the scene of the conflagration. And even better to scrape off with a knife a small amount of carbon powder and shavings for tinder. 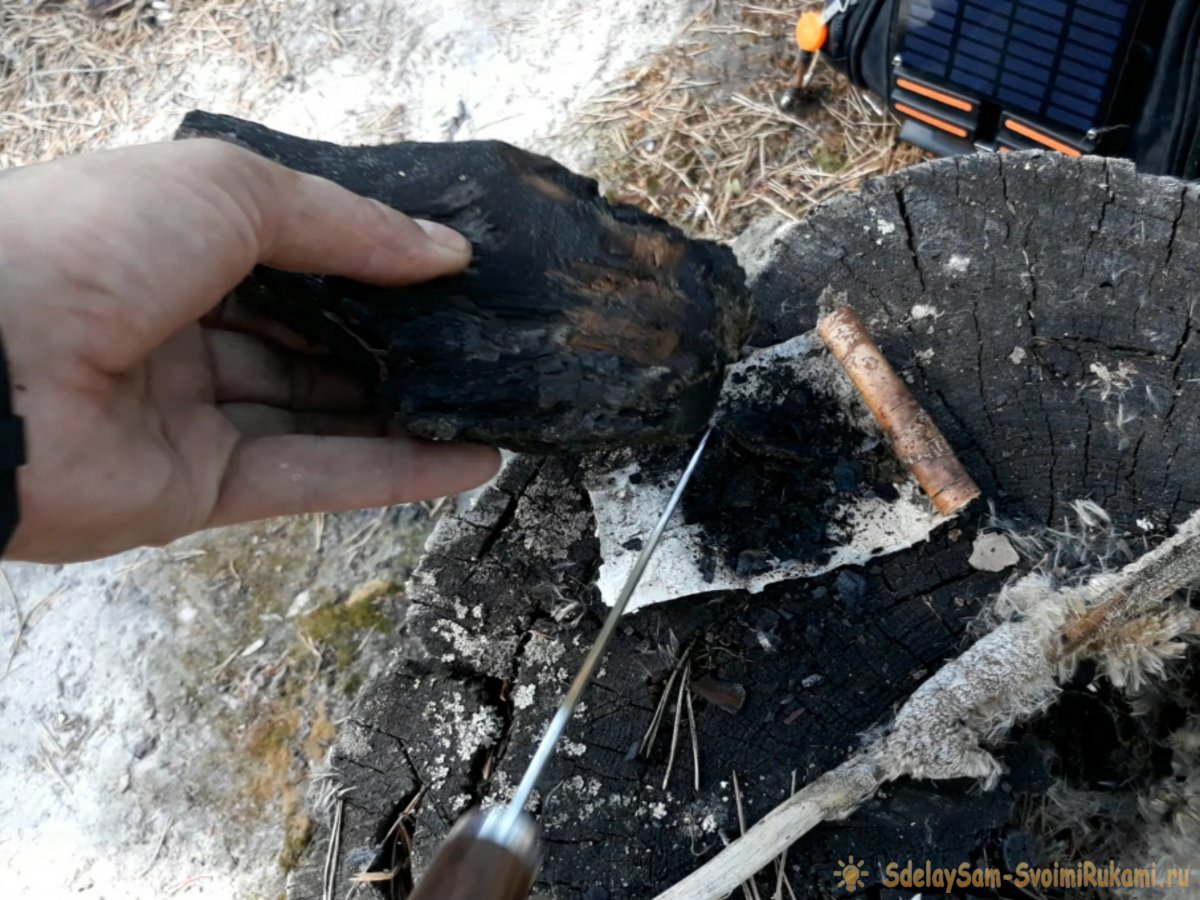 So everything is ready for the extraction of fire. If the weather is windy, then put the stump on a piece of bark, she put the tinder with a coal chip and pin with a knife rubbed with bark to the surface of the stump, the butt from myself. Next, a sharp, glancing blow, hitting a sharp edge of the stone on the knife butt. From top to bottom. So that the sparks fell on coal dust and tinder. Coal dust (unless of course it will be able to find) will begin to decay immediately upon exposure to sparks. 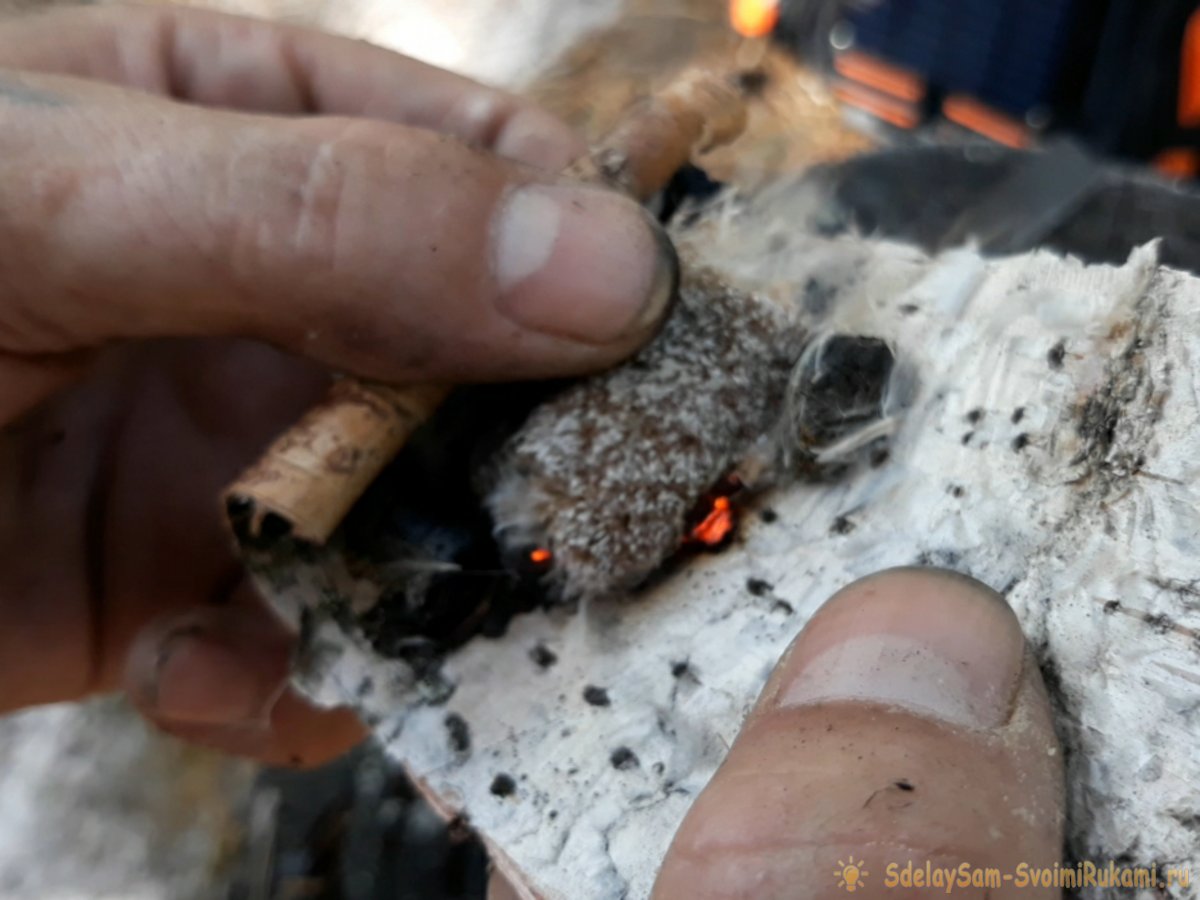 And here the important thing is not to miss a moment! Carefully, so as not to disperse the tinder around, begin to blow on the smoldering spot. As soon as corruption becomes more stable and sustainable, turn the bark smoldering tinder inside, like so: 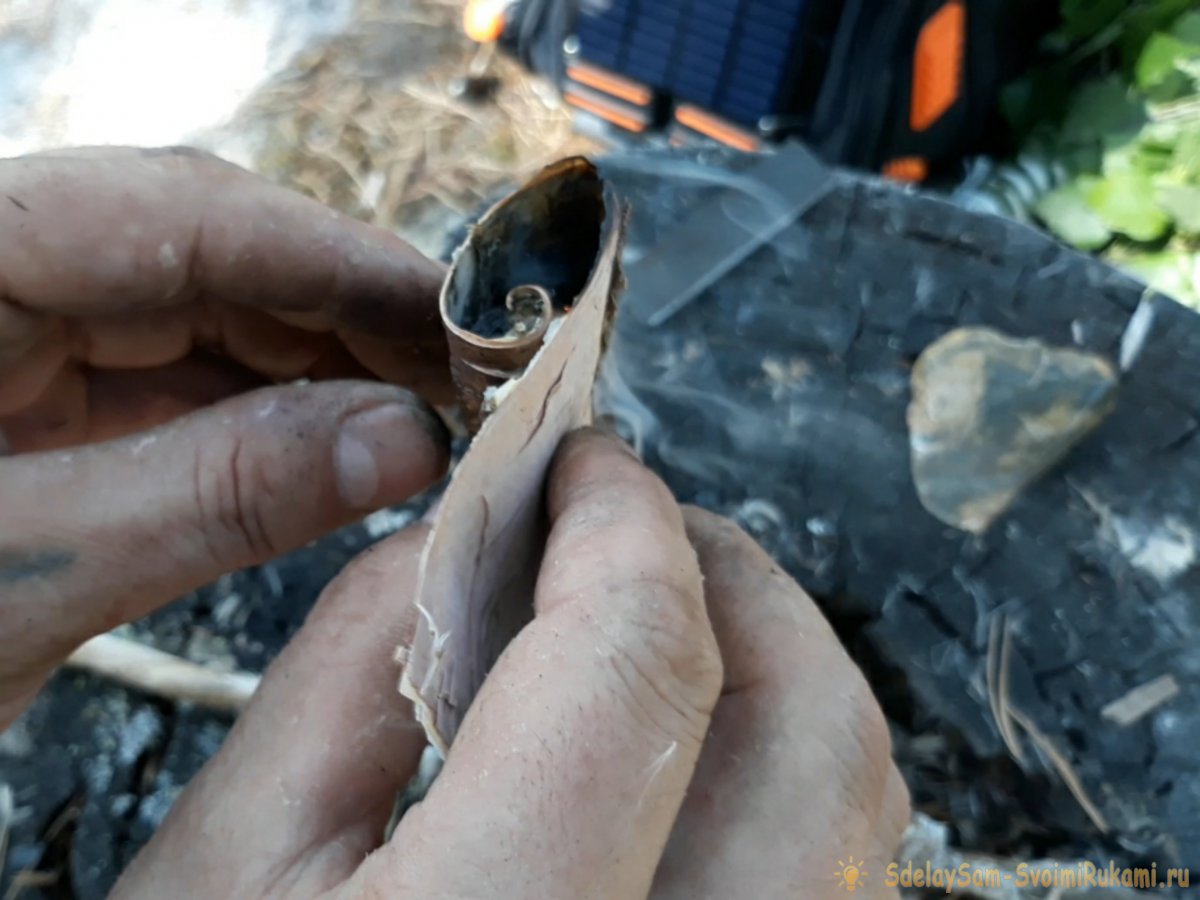 Now, when pressed with birch bark tinder, and will not scatter, blow up the whole thing without sparing lungs! To obtain a flame.

Well, then it’s the old scenario: first, small kindling, then larger and larger. Unfortunately, to fully dissolve the fire this time failed because of the extreme fire situation is declared in our area, but the principle of receiving flames, I think, clear. In wet weather, of course, have to suffer a lot, but in this case fire to get this very real way. Personally, I basically do not take to the woods no matches or lighters. Only flint. Ferrocerium flint, and when just a piece of a file with one smooth edge. Only in this primitive way, in my opinion, you can get real, natural living fire. In the same way I’m melting and baking in his bath. This interesting process gives extraordinary pleasure! 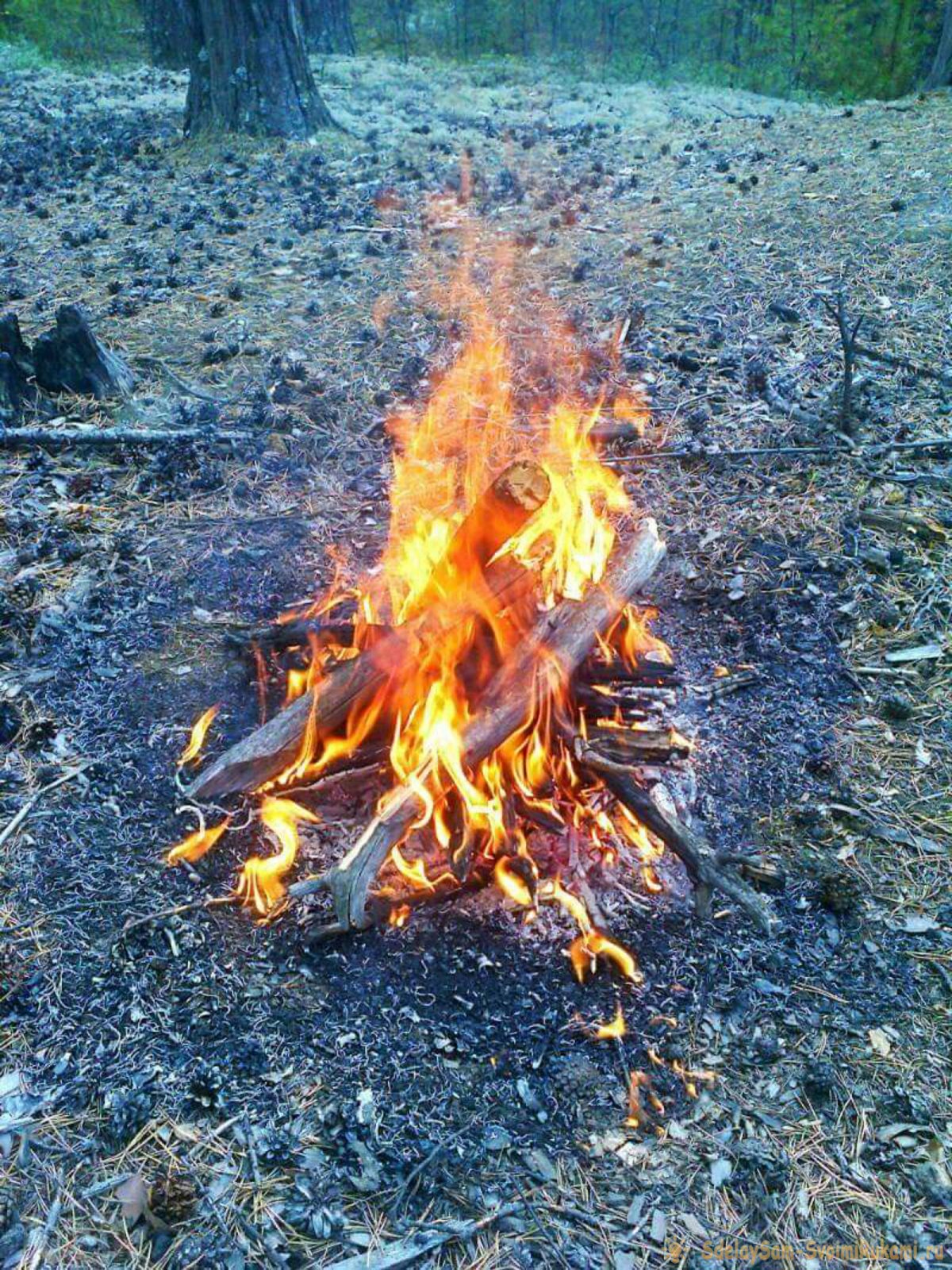