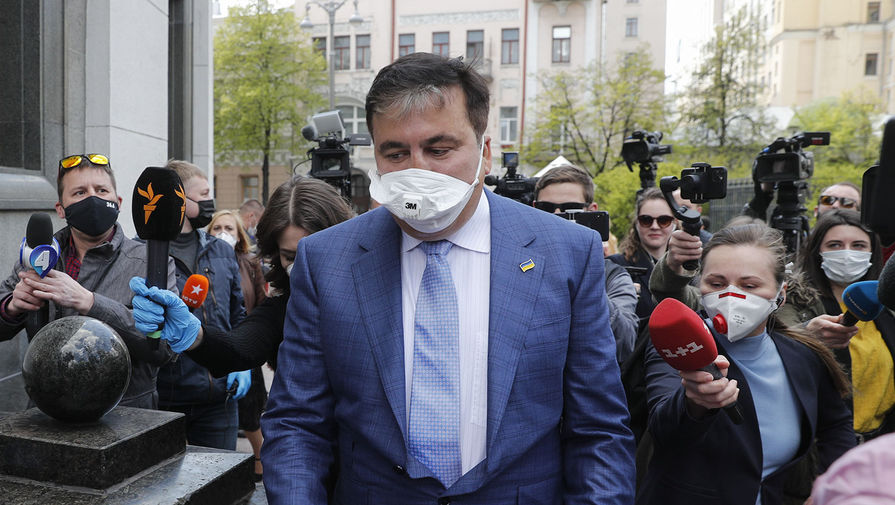 Ukrainian official Mikhail Saakashvili said that the authorities ‘ actions can lead to that Ukraine will cease to exist in its current form. The former Governor of the Odessa region also noted that officials in the regions have created a “private army” and prepare for “the breakaway”. This is not the first forecast of Saakashvili about the disintegration of the country.

The actions of the Ukrainian authorities may lead to the termination of the state’s existence in its current form, said the head of the Ukrainian Executive Committee of the national Council reform Mikheil Saakashvili.

“Preparing for the big rematch of the forces which [the party of President Vladimir Zelensky] “Servant [of the people]” was moved from the Central government last year”, — Saakashvili said on air of the TV channel “Ukraine 24”, most likely referring to the party of the predecessor Zelensky “European solidarity”.

He said that regional authorities create “private armies”, financed from the state budget.

“The situation which gave local lords the whole budget, they are there with fat rage. In addition that will steal 80%, the rest create a private army. Here in Odessa has a municipal guard, just the usual thugs, “titushki”, who go in uniform and with weapons and are financed from the budget”, — told Saakashvili.

“Some of them is preparing to breakaway from Ukraine, there is no doubt. Ukraine in this form we can lose if something is not drastically done. And the other part is ready to gain revenge in Kyiv”, — said Ukrainian official.

Earlier, supporters of the former President of Ukraine Petro Poroshenko, the head of “European solidarity,” organized the rally. They opposed the bill of the Deputy from “public Servants” Maxim Bogunskogo. The MP proposed to defer for three years the full transition of Russian schools in the Ukrainian language. Currently, according to the law “On ensuring the functioning of Ukrainian as the state language”, they are required to do so by the beginning of the school year.

Rallies of supporters of Poroshenko was held under the slogan “hands off the language” near the building of Verkhovna Rada and was accompanied by the speeches of politicians of the “European solidarity”.

It should be noted that this is not the first forecast Saakashvili regarding the collapse of Ukraine. Earlier, former Georgian President and ex-Governor of Odessa region mentioned in the broadcast of the same “of Ukraine on 24” that the country “stands on the verge of collapse”.

The politician expressed the opinion that it will happen, if the authorities will soon hold any changes. He noted that Ukrainians should not fool ourselves. According to Saakashvili, centrifugal, separatist sentiments “greatly intensified in the South, in the East, in the far West, in the North — wherever you look”.

The official stated that, in General, the country is “very bad” situation.

At the same time, not only Saakashvili believes that Ukraine is falling apart. His opinion, according to polls by the Kiev international Institute of sociology (KIIS) support 46,1% of Ukrainians. At the same time, 40.8% of respondents believe that the country, on the contrary, “the path of unification.”

“In Russia it is, of course, disturbing. The split in Ukrainian society is very deep: the regions of the Southeast that don’t want to hear about the return of a part of a unified Ukraine, can follow Odessa, Kherson, Nikolaev, Zaporozhye who are still waiting,” said he in an interview with “Parlamentskaya Gazeta”.

According to the Senator, Russia is concerned about the situation in the neighboring country, where the Ukrainian head of in fact running the country. While this is happening, Jabbarov said, “certain forces” in Ukraine can undermine the state.

At the end of June, the Verkhovna Rada Deputy of the faction “the Opposition platform For life,” Ilya Kiva declared that the destruction of Ukraine will lead the actions of nationalist and right-wing organizations. In his words, “trained a whole cohort of militants who are willing to shoot people in the streets.”

And the livelihood of those organizations produced its participants through “racketeering, destruction of business, kidnapping.” “It’s part of the plan for the final decay of society and destruction of Ukraine by turning it into an asset in the colony,” — said Kiva.