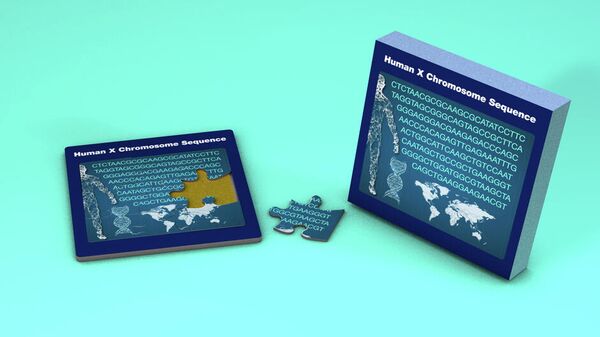 American scientists first described through the DNA sequence of human chromosome. This is an important step towards creating a full sequence of the human genome. The results were published in the journal Nature.

Scientists from the National Institute for the study of the human genome (NHGRI), part of the National institutes of health (NIH) of the USA together with colleagues from the genomics Institute at the University of California in Santa Cruz announced the first brand bessellieu the Assembly of the DNA sequence of the human X chromosome.

“This achievement begins a new era in genomics research — presented in a press release from NHGRI words of the organization’s Director Eric green (Eric Green). — The ability to generate a truly complete sequence of chromosomes and genomes is a technical achievement that will help us to obtain a detailed understanding of the function of the genome and to use this information in medical practice”.

Despite the fact that the reference sequence of the human genome was established almost twenty years ago, it still has hundreds of gaps. Although the majority of DNA again, these missing segments can include functional elements related to the different diseases.

Because the human genome is incredibly long and consists of approximately six billion bases, machines for DNA sequencing can’t read all the grounds simultaneously. They analyze in a single pass a sequence of several hundred bases, and then sew them together. The authors compare this process with picking up the puzzle.

“If you are working with small pieces, each of them contains very little context to determine where it came from. For example, in such pieces as the blue sky you find it difficult to assemble the whole picture, says first author Adam Filippi (Adam Phillippy) from NHGRI. — The same is true for sequencing of the human genome. Until now, the pieces were too small and there was no way to put the complex puzzle pieces of the genome together.”

The work was made possible thanks to the advent of technology, nanopores, which allows us to sequence long segments of DNA, leaving the molecule intact. The researchers used the Oxford Nanopore MinION sequencer Technologies, which captures the changes of current that occur when individual DNA molecules pass through tiny nanopores in the membrane. Then the authors once analyzed, these large DNA molecules on two different devices, each of which generates a very long sequence.

To combine these three methods, the researchers used their own newly developed computer program for Assembly of a plurality of segments of the generated sequences. As a result, they got a full genome Assembly

X chromosomes from end-to-end (telomere-to-telomere), which from the point of view of continuity, completeness and accuracy surpasses all previous assemblies of the human genome. It including closes the largest remaining gap in the sequence of the X chromosome is approximately three million bases of repetitive DNA in the middle part of the chromosome called the centromere.

“We found that some of these regions where there were gaps in the reference sequence are actually one of the richest from the point of view of variations in human populations, so we used to miss a lot of information important for understanding human biology and disease,” says another study author, Karen MIGA (Karen Miga), a researcher from the Institute of genomics in Santa Cruz.

This study is part of a project to create a complete reference sequence of the human genome, implemented by a research consortium T2T is funded in part by NHGRI.