Mari El Republic is a small Republic in the Volga region, where it is still preserved ancestral pagan culture: special ceremonies, traditional feasts, utensils and clothing. Japanese photographer Ikura of Kuwajima spent about a year in Mari El Republic, working on the project “cadira Mari” or “Mari forest”. 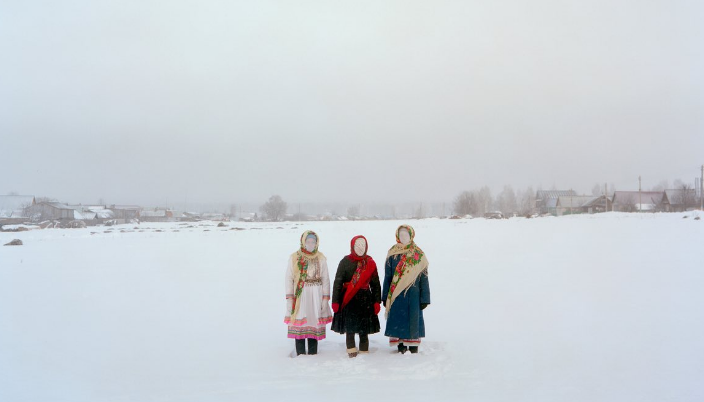 According to the census 2010 population in Russia is slightly less than 550 thousand Mari, of whom about half live in the Mari El Republic.

Although Mari had converted to Orthodoxy in the Republic remained pagan traditions and belief in witchcraft rituals.

For paganism is characteristic of the cult of the omnipotent nature. Nature is seen as a source of good, and it is believed that she can always help the person.

The Mari believe in “Keremet” — spirits who live in special groves.

Because of the devotion to the nature of rural residents a special relationship with animals and birds. Some of them in the Mari mythology, are considered especially important, for example, geese.

Horses, bulls, sheep and poultry can bring a sacrifice to the gods. Before that you need to make sure that the animal safely.

Paganism in Mari El Republic coexist with the Orthodox faith.

A large part of the Mari El Republic is situated on the left Bank of the Volga. In the Republic, about 700 lakes and ponds.

In the forests of Mari perform rituals, sacrifices, holidays, mass prayer: ask the nature of the rain or sun.

The author of the photos says in Japanese, Russian, and English, had worked in Eastern Europe and Central Asia, including Ukraine and Kazakhstan.

In 2013, Kuwajima was exhibited at the Venice Biennale in the pavilion of Central Asia.

Life in the Mari forest is unlike what we are accustomed to in modern cities. Kuwajima felt like “time stood still”.

After the collapse of the USSR Maris had to work hard to preserve their culture.

It looks like the annual World prayer the adherents of the Mari religion and the celebration of the New year — “Shoryk-Yol” (Mari — “sheep’s foot”). Adults and children are looking for in a dark fold of the white lamb, which signifies good fortune in the coming year. The faces of carols are closed — off to not a bad word.

In the cities of Mari El Republic there is a clear desire Mari to preserve their identity: the people are adapting old traditions to modern conditions of life.

This tradition allows us to call Mari “the last pagans of Europe.”

Photo project Kuwajima in 2013 became part of the exhibition “Marie. Research”, organized by the project Department of Research Arts in the modern art Center “Winery”.