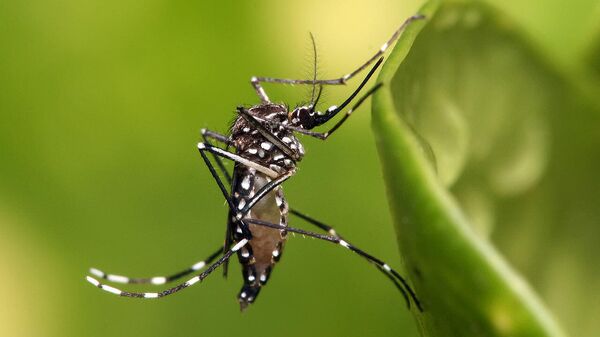 American scientists have shown that changing just one gene turns mosquito females to males which do not bite and are not able to convey the threat of infection. The study is published in the journal Proceedings of the National Academy of Sciences.

Biologists from Virginia tech in collaboration with colleagues from Texas A&M University studied the mosquito aegypti Aedes aegypti, females who are carriers of dengue, chikungunya, yellow fever, zika virus, and some other dangerous diseases. Males of this species are not dangerous as it does not bite.

Particular attention researchers devoted to the analysis of a dominant locus in one chromosome pair — the M-locus that determines male gender.

“The presence of M-locus determines the male sex, it is like a human Y-chromosome” — presented in a press release from the Polytechnic University of Virginia, the head of research Jessani Tu (Zhijian Tu), Professor of biochemistry in the College of agriculture and life Sciences.

Inserting the gene Nix previously discovered a male determining gene in the M-locus in Aedes aegypti in chromosomal region that are inherited by women, scientists have shown that this alone is enough to turn females in fertile — able to produce offspring males with typical male gene expression.

First, the authors created and characterized a variety of transgenic lines of mosquitoes that have expressed an extra copy of the gene Nix.

“We found that Nix-mediated sexual transformation — penetrating and stable for many generations in the laboratory, and this means that these characteristics will be inherited by future generations,” explains one study author Michelle Anderson (Michelle Anderson).

However, genetically modified mosquitoes could not fly because they did not inherit the gene myo-sex, also located in the M-locus.

“It became clear that a second gene, named myo-sex was necessary for the males to fly. This suggests the complexity of the molecular functions of the M-locus, containing at least thirty genes,” said first author Azadeh Arian (Aryan Azadeh) from the laboratory of Jessana That.

Scientists say that the creation of stable transgenic lines, transforming female mosquitoes flying in fertile males, more research is needed to determine how to turn genes Nix and myo-sex in the genome together. According to the authors, it may be crucial for developing methods of controlling mosquitoes.

“Our method has great potential for developing strategies of mosquito control by reducing vector populations through conversion of the floor or using the sterile insect technique,” emphasizes James Bigler (James Biedler) from the Institute of life Sciences Franklin at the Polytechnic University of Virginia.

While scientists were focused only on one kind of mosquito poses the greatest threat to people, but in the future they are willing to disseminate their results to other species. The authors note that they found the gene Nix all mosquitoes of the genus Aedes.