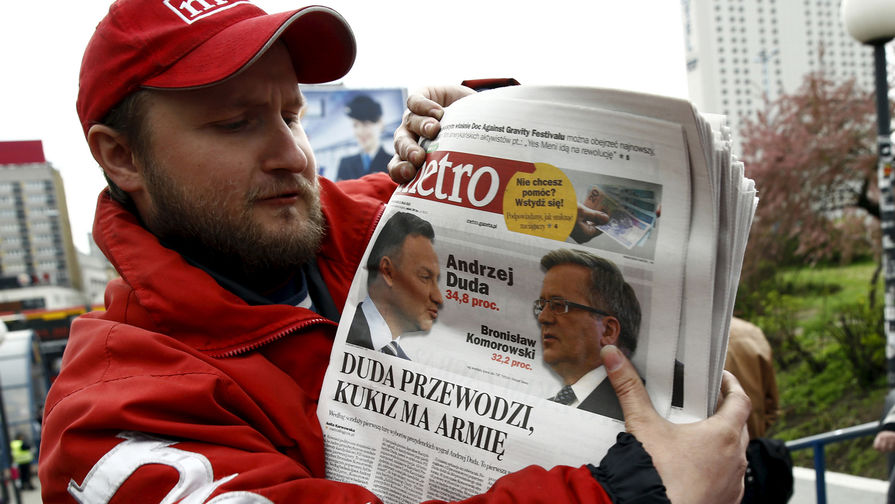 Poland plans to develop rules that limit the concentration of foreign media on their territory. The head of the ruling party “law and justice” Jaroslaw Kaczynski said that the reform in relation to media scheduled to be held before the expiry of the current Parliament. During an intense presidential campaign, the Pis and the President Andrzej Duda has repeatedly accused the foreign media in an attempt to interfere in elections. Under criticism fell mainly those publications that criticized the President.

The ruling Polish party “law and justice” (IPR) intends to propose to Parliament a bill restricting the work of foreign media in the country. About this Polish public radio said the Chairman of the Pis Jaroslaw Kaczynski.

Potential rules the media still “analyzed, and on this issue there have been discussions,” he added.

Answering the question of whether IPRs propose changes prior to the end of her mandate (parliamentary elections in Poland will be held in 2023), Kaczynski said: “We will be able to do it much faster, at least at the legislative level, but the success of this process is linked to many changes that we must implement in our country and in international relations.”

However, he also said that in the autumn the government will be carried out reshuffle, but Prime Minister Mateusz Morawiecki will retain his post.

Formally, the Chairman of the ruling party does not take any public post, however, it is believed that he has complete control over IPRs, thereby affecting all its representatives in government.

“Law and justice” drew attention to the work of foreign media during the presidential election, which was won by the Latino party Andrzej Duda, support which has had a predictable Kaczynski. 12 July was held the second round of elections, in which Duda got 51% and was re-elected for a second term.

The campaign stood out for the President difficult, and the results, though he secured the win still came as a surprise for the authorities. Important role in this process was played by Kaczynski and the media.

Initially the elections were scheduled for may 10, but their implementation was hampered pandemic coronavirus COVID-19, and Warsaw showed too firm determination to hold elections in time. This scenario promoted by Jaroslaw Kaczynski. The IPR even introduced a bill to vote by post in conditions of pandemic.

And the reasons for the postponement of the elections was undesirable for the authorities was directly voiced Kaczynski in the Polish television channel TVN 24.

“We know that currently in the world, and, consequently, in Poland, begins a serious economic crisis, which still was not. We will probably find ourselves in the phase of such a painful combat that crisis, and this probably also accounted for by the opposition politician said. — Today our opponents probably rate their chances as very small, and I believe that next year will be different. Is it right? This is another question.”

He also said that in the case of a transfer of the opposition is time to change their candidates to be more successful. The straightness of the Chairperson, the IPR was in fact a confirmation of the statements of the opposition about the readiness of the authorities to risk the health of the citizens or the transparency of the electoral process in favor of his victory. The initiative of holding the elections on time and in the mail has caused divisions in the ranks of the ruling party, with the result that the procedure was postponed, but not for a substantial period, and a month and a half.

The opposition is really actually followed the advice of a Kaczynski — “the Civil platform” has changed its candidate and has nominated the mayor of Warsaw for Rafal Trzaskowski. It was he who made up the Dude strong competition.

In the first round of policies has gained about 30.3% of the votes, while the incumbent received 43.7 per cent. For the second round Trzaskowski managed to mobilize the electorate, the other candidates out of the race.

The intensity of the already intense races added media. The opposition media has reached such proportions that politicians were unable to agree on the participation in the debate, and each of them held a special pre-election show under the auspices of friendly media.

Before the second round election, state television planned to hold a debate of presidential candidates. Trzaskowski refused to take part in a panel discussion organized by the state media, leaving him alone in the channel. Duda, in turn, refused to participate in the debate, which was organized by non-governmental media.

A separate war, the authorities unleashed with foreign publications critical of covering the election campaign.

So, supporters Duda violently reacted to the news of the most popular Polish tabloid Fakt that the President has pardoned a convicted man who was beaten and molested his daughter.

“Mr. President, how could you forgive someone like him?” — asked the author, referring to the traditional values around protection which Duda has built his campaign.

In response to the article by Duda and the IPR has accused the owners of Holding publication Ringier (a Swiss media company) and Axel Springer (German publishing house) of meddling in the election.

“Does the company Axel Springer with German roots, which is the owner of the newspaper Fakt, to influence the presidential elections in Poland? — asked Duda. — The Germans want to elect a President of Poland?”

In addition, the President accused the correspondent of Die Welt in Warsaw in the promotion of the campaign Trzaskowski: “Today, ladies and gentlemen, we have another attack from Germany during our elections.”

In response to criticism of the Duda editor in chief of Die Welt Ulf Poschardt published an open letter in which he accused the President in a propaganda attacks on the media.

Criticism of the authorities has been made to other media. So, during the election campaign, MEP from Pis Beata Mazurek wrote on his Twitter page: “Trzaskowski afraid of debate with the poles. He prefers a debate in the WSI 24, and the German Onet [online newspaper that criticized the President]”.

Under WSI 24 MP meant the Polish TV channel TVN 24, owned by American shareholders. WSI is an acronym for military intelligence and counterintelligence of Poland, which existed in the years 1991-2006 and was a big scandal disbanded by the Deputy Minister of national defence by Antonius Makarevichem under the pretext of “intrusion” her “numerous Russian agents”.

The statement responded to the U.S. Ambassador to Poland, and then between the sides unfolded in a public altercation.

Duda had the full support of the state media, which, in turn, vengeance attacked Trzaskowski, accusing him of promoting LGBT and that he is ready to betray the country’s interests in favor of foreign countries.

The authorities soon went on to hints. Justice Minister Zbigniew Ziobro said that the government will more closely monitor the media owned by foreigners.

“We need to consider carefully the situation with mass media in Poland, because what is happening now, we can’t just skip, and I hope that after the presidential campaign we will make some conclusions”, — said the Minister of justice.

Perhaps a bill to limit the work of foreign media in Poland — these are the conclusions drawn by the government. Although this step will almost certainly get a condemnation of Brussels, who never tires to Express dissatisfaction with the violation of the principles of the rule of law and the Warsaw attempts to subjugate the other branches of government, Peace, with high probability, will bring their plans to life.

The Polish media coverage of the campaign has become one of the main indicators of polarization. And, interestingly, this history has led to the affirmation of the desire of the ruling party to subjugate another important instrument of power.

In the report of observers from the European Organization for security and cooperation in the first round of elections says: “In clearly polarized and biased environment, the media failed to provide balanced and impartial coverage, but rather served as a tool of campaign for the incumbent President.”