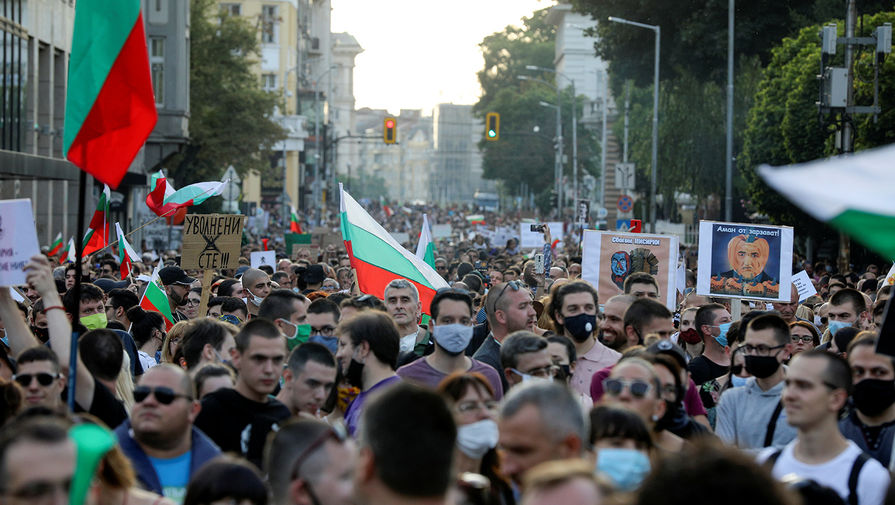 The Bulgarian Parliament voted against the vote of no confidence in the current Cabinet of Ministers, headed by Boyko Borisov. The initiative of censure introduced earlier, the opposition Bulgarian socialist party. For resignation of the Cabinet of the opposition did not have enough on 19 votes. However, the Prime Minister too early to relax — the country is covered by the largest in seven years, anti-government protests, have been used not only by the opposition but also the President.

The Bulgarian people’s Assembly did not support the vote of no confidence in the government of Boyko Borisov. July 15, the opposition Bulgarian socialist party (BSP) for the fifth time made the offer of a vote in connection with corruption in government.

On the Parliament website indicated that 102 parliamentarians voted for the censure motion, 124 against and 11 abstained. A vote shall be considered adopted if voted for by more than half of all MPs, the MP 121.

Discussion on no-confidence motion passed in Parliament yesterday. On the same day, thousands of residents of the capital went on a protest against the government, blocking traffic in the city centre. The demonstrators tried to encircle the Parliament, who defended a human chain of police officers.

Bulgaria covered by the 2013 political crisis. Seven years ago, the country held the anti-monopoly protests, which the government of Borisov announced the resignation. Now the Prime Minister is once again faced with the discontent of the people.

Protests held on July 9, periodically demonstrations result in clashes with police. In this situation involved a leak of photos premiere, the police RAID on the presidential administration, the clashes on the beach, owned by the oligarch and the opposition of the President and the Prime Minister.

The reason for the protests was the news that on the territory of the state of the beach built the house of the supporter Borisov, the oligarch and the former leader of the party “Movement for rights and freedoms” of Ahmed Dogan. His party, representing the interests of primarily the ethnic Turkish minority in Bulgaria, now out of business, however, the Dogan remains an influential figure in the country.

July 7, former justice Minister and leader of the opposition party, “Yes, Bulgaria,” Hristo Ivanov has published video footage of him and his supporters trying to visit the beach, which is the house of Ahmed Dogan.

Ivanov argued that the construction of the Villa on the coast was illegal, as was the transfer of the beach property in the private Dogan. Aggravated the situation, the behavior of the guards oligarchs that let finding available on site, and then the police arrived, demanded the supporters of Ivanov’s documents. Against the background of allegations that the beach on which they arrived, must be open to all, the behavior of the guards and police seemed proof that the property of the businessman, the government illegally transferred the land to state ownership of the sea.

The next day, the President of Bulgaria, rumen Radev said that the guard who let finding Mann on the beach — the officers of national defense, responsible for protecting the President, Prime Minister and other dignitaries, and the Dogan does not have the right to use their services.

The incident caused a wave of indignation among the citizens due to illegal construction on the Bulgarian coast, but soon the discontent escalated into protests in connection with the influence of figures such as Dogan, the political life of the country and its resources. “We wanted to show that all government serves the interests of the Dogan” — quoted Ivanov The New York Times.

The government urges and the President of Bulgaria. Relations between Borisov and Radium has long turned into a confrontation, and although the President of the country — a figure performing, by and large, ceremonial functions, Radio was able to significantly influence the situation.

In February, the President addressed the criticism against the government, saying that it deprives the Cabinet of its trust due to the lack of reforms, corruption and the collapse of the state.

Soon after the politician criticized the measures taken by the government to fight the pandemic coronavirus COVID-19.

Last month in the online published photos of the sleeping Prime Minister, beside him on the nightstand was a gun, wads of banknotes in €500 and gold bullion.

Borisov called the pictures fake and accused the President in their publications and shadowing him. Radev, however, denied that is relevant to the scandal.

The government, in turn, in debt does not remain. A few days before the President’s speech on the deprivation of trust in the Prosecutor’s office said that Radev “high probability” involved in corruption.

This time the supporters of Borisov also retaliated. July 9, in the President’s administration, a search was conducted. On the same day, the interrogation was caused by the President’s adviser on security issues Milush Elijah and the Commissioner against corruption Plamen Uzunov.

The protesters, with the submission of the President took these steps as a revenge to the Prime Minister for criticism because of the transfer of the beach property in Dogana. To hand the opposition played all the previous scandals, including the story leaked that senior officials of the ruling party “coat of ARMS” bought luxury apartments in Sofia for a price significantly below market.

Protests were held not only in the capital but other major cities — Varna, Plovdiv, Burgas, Veliko Tarnovo, Ruse, Blagoevgrad, Stara Zagora, Pleven, Gabrovo and Kyustendil. From July 9 to the streets of Bulgarian towns thousands of people to protest corruption in government.

Last Wednesday, Borisov has tried to bring down the intensity, announcing the resignation of the Ministers of Finance, economy and internal Affairs. Also “coat of ARMS” issued a statement in which the party denying the impact of the reprimand on the political life of the country. However, Borisov refused to leave his post and dissolve the government. Opponents of the Prime Minister, however, also intend to go to the end.

“It was necessary to engage in dialogue with people when he had the time — said on the eve Radev in response to the call of the Chairman of the Parliament of Flowers Craneway to negotiate with the protesters. — They [government members] haughtily looked down upon, despite the needs of the people.”

On protests impact and fatigue citizens from pandemic COVID-19, and fear of its economic consequences, in the light of which the news about the luxury in which you live the people around the Prime Minister, have a more tangible effect.

Meanwhile, recently the Prime Minister hoped to strengthen his position and bring down the fear of the companies before the financial crisis positive news from Brussels.

July 10, Bulgaria joined the European exchange-rate mechanism and the European banking Union, which is the first stage of the country’s accession to the Euro zone. If Sofia will meet other economic criteria, within three years to join the single currency of the European Union.

Borisov could expect that such developments will become a symbol of progress for the Bulgarians. But his achievement pales before the determination of the people to get rid of the government in the face of financial crisis is a consequence of the pandemic coronavirus. If the Prime Minister will not be able to cope with protests by 2021, when scheduled to hold parliamentary elections, Bulgaria will choose a new government. Until the President and Prime Minister will have to live with.