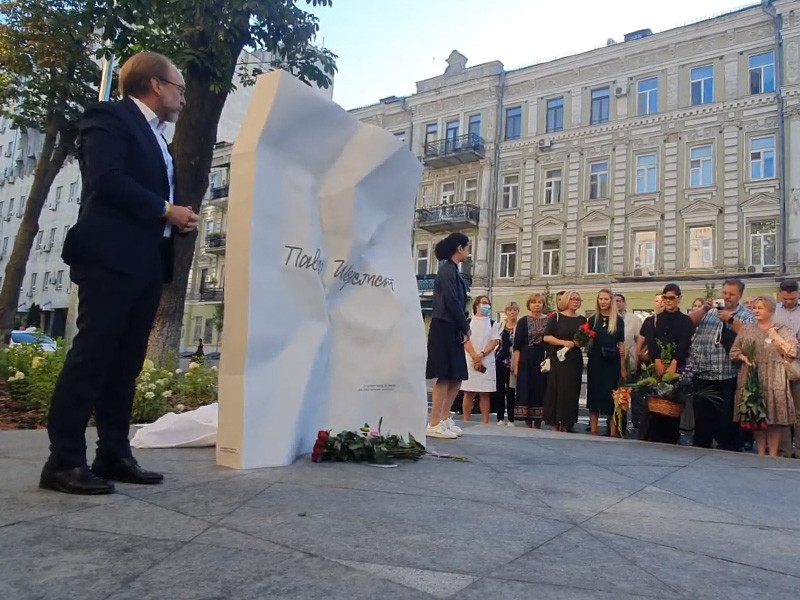 In Kiev the fourth anniversary of the murder of journalist Pavel Sheremet has opened a monument in his honor, according to “Strenia”. The monument is made of stone crumpled white sheet of paper with the name of the journalist. It is set on the street of Ivan Franko in the place where in 2016 died Sheremet. The author of the memorial was the sculptor Nazar Bilyk. The opening ceremony was attended friends and relatives of the deceased journalist.

The President of Ukraine Vladimir Zelensky wrote in the Telegram that the murder Sheremet is a shame for the country. “He could never take away freedom so the customers decided to take a life. His daring murder is a loss for all independent media and journalists,” wrote Zelensky. According to him, the investigation is under the scrutiny of the Ukrainian society, and the trial of the perpetrators, organizers and customers of murder Sheremeta is the duty of the state and law enforcement agencies.

The U.S. Embassy in Kiev had demanded a “thorough, impartial and credible investigation” of the murder of a journalist. “We respect the role of mass media and other independent Ukrainian journalists in the brave message of truth and assist in the open exchange of information and ideas. The work of independent journalists is vital to the success of democracy”, – stated in the message of the Embassy in Facebook.

Pavel Sheremet was killed on the morning of July 20, 2016 in Kiev. In the car in which he rode the morning air on the radio “Vesti”, an explosive device went off. The investigation has put forward several versions of motives of murder, including those relating to critical publications in the edition “Ukrainian truth” and appearances on “Radio Vesti”, as well as conflicts in his personal life Sheremet. Prosecutor General Yury Lutsenko called the main version of the murder Sheremet retaliation for his professional activities.

In 2018, the civil wife of Pavel Sheremet, Olena Prytula appealed to the Pechersky district court of Kiev with a complaint. She complained of the inactivity of the Prosecutor General Yury Lutsenko, slow investigation, and the reluctance of law enforcement agencies to consider the incident a terrorist attack.

In earlier February, the treatment of women to the attorney General stated: “the Audacity with which the terrorists acted, indicates that the purpose of the crime was not the murder of Pavel Sheremet and obtain the psychological effect of panic and oppression of the witnesses of the attack, viewers and friends of the deceased Pavel Sheremet in their own security. It is obvious that the offence is committed for the purpose of intimidation of the population and of journalists in particular.”

In July 2019 the new President of Ukraine Vladimir Zelensky has promised to seek a breakthrough in the investigation of the murder of journalist Pavel Sheremet. However, the specific timing he never called. At the end of that year it became known that the national police of Ukraine detained suspected of murder of the journalist, among whom were the participants of military operations in the Donbass Andrei Antonenko, Peter Kiyan and Jan Dugar as a doctor-volunteer Julia Kuzmenko.