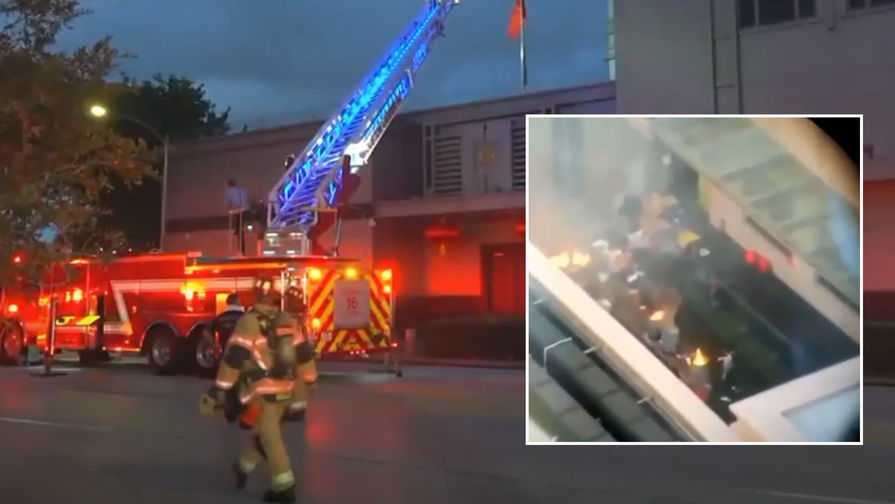 Relations between the US and China went down one more level. The state Department has decided to close the Chinese Consulate in Houston, the Chinese government is ready to resort to the mirror measures. According to experts, relations between the two countries is unlikely to ever be able to recover to the level before the presidency of Donald trump.

The US demanded that China within 72 hours to close the Consulate General in Houston. Officially, the request was sent on July 21. China’s foreign Ministry confirmed the information. The official representative the Ministry of foreign Affairs of China Wang Wenbin called the Washington’s move as a political provocation.

China urges U.S. to immediately abandon claims and considers them to be erroneous. As said the Chinese diplomat, the us openly incite hatred against China.

The head a press-services of US state Department Morgan Ortagus explained that the decision to close is taken “in order to protect American intellectual property and personal data of Americans”.

Shortly before the information about the closure of the Chinese Consulate became known to the General public, on site, a fire broke out. According to the Fox News channel, the police suggest that the fire is due to the fact that in the courtyard of the Embassy were burned documents.

It is noteworthy that when on a scene there arrived firefighters and police officers, they were denied access to the territory.

As told by U.S. Secretary of state Mike Pompeo, with this step the American authorities are going to show that Washington expects changes to the policy pursued by the Communist party of China (CPC). He claims that the alleged theft by China of intellectual property cost the American economy “hundreds of thousands of jobs.”

“We have clearly set out their expectations regarding how to behave Communist party of China. And when she does not do so, we are going to take action to protect the American people,” said Pompeo.

As noted in conversation with “Газетой.Ru” the head of the Center for Asia-Pacific studies, IMEMO ran Alexander LOMANOV,

the US decision on the closure of the Chinese Consulate in Houston lowers bilateral relations to the lowest point in the last 40 years.

“Everything that we have seen in the last month — almost daily deterioration in us-Chinese relations”, — the expert adds.

According to him, almost every day on the American side followed the attacks, statements, decisions are made, which in the eyes destroy all that has been accumulated in us-China relations over the past 40 years. In a sense, the closing of the Houston Consulate can even be considered symbolic, as it was the first Chinese Consulate in USA, which opened in 1979, the year of the establishment of diplomatic relations.

“It is clear that America’s relations with China have moved to the language of threats, intimidation and direct pressure. In fact, every day is some kind of anti — Chinese solution,” said LOMANOV.

In the relations of the parties lately have really been marked by several pain points. It is a question of origin, coronavirus COVID-19, and the situation with human rights in Hong Kong, Xinjiang Uygur Autonomous region and other Chinese regions, the participation of Huawei in projects on the European market, etc.

“We very rarely see such moments in history when attitudes become worse literally by the day, says this situation LOMANOV. —

Closure of the Consulate is just the nail in the coffin of the once-thriving former and very constructive relationship”.

Although the deterioration in us-Chinese relations lasts only four years, since taking office, President Donald trump, relations between the two countries is unlikely to bounce back even after his departure from power.

According to Alexander LOMANOV, “play back nothing is impossible”. The expert recalled that a similar situation unfolded at the end of the second term of Barack Obama, but then Washington went on a permanent aggravation of relations with Moscow. Despite the fact that Donald trump has declared about the intentions to establish Russian-American dialogue, the American state machine is not allowed to do. The expert is confident that the situation will be repeated in the case of Beijing.

Even if in November, trump lost the presidential election to his opponent from Democratic party, Joe Biden, it is unlikely he will be able to drastically turn the situation 180 degrees. However, as noted LOMANOV, even if the process of deterioration of relations will stop and it will be a great achievement.

Although the initiative for the deterioration of relations definitely belongs to the administration trump, China is also responsible for the escalation. This raises the question about the possible response of Beijing to the decision of the U.S. Consulate in Houston.

“China is not a weak state which will miss such a shot. The question is not whether Lee said Beijing and how it will respond”,

The most likely “victim” is the US Consulate in Wuhan. About its possible closure reports Reuters with reference to sources. It is noteworthy that this Consulate because of an outbreak of coronavirus was closed at the end of January this year.

As reports Associated Press with reference to sources, the US does not plan to open this Consulate again. In the administration of the trump expect that the rejection of the resumption of the Consulate in Wuhan can soften the reaction of Beijing to the decision of the U.S. Consulate in Houston.

If Chinese authorities are not satisfied with this exchange, they will remain alternative options: the US Consulate in Shanghai, Guangzhou, Chengdu and Shenyang.

In addition, continued to act independently, US Consulate General in Hong Kong and Macau. To its closure have urged Chinese social networks, believing that this step will be for Washington to be the most sensitive. However, practice shows that in recent months, for escalation of relations with China the United States is willing to sacrifice the special relationship with Hong Kong.