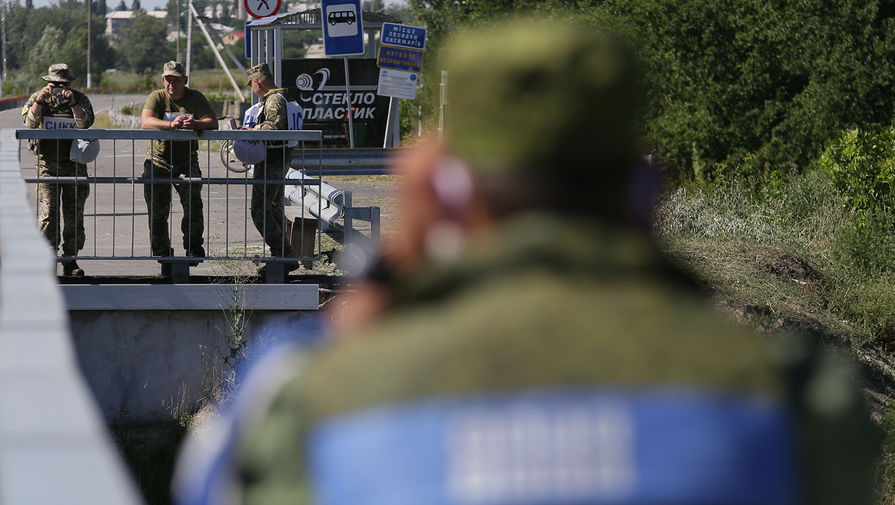 Publication of the text of the agreement between Ukraine and the breakaway republics of Donbass ceasefire shows that they are truly breakthrough in nature. Probably, the willingness of Kiev to make concessions related to the recent talks in Berlin and the desire of the Ukrainian authorities to hold a new meeting in Normandy format. About the final resolution of the conflict in the Donbass can not speak — in parallel open Kiev is sabotaging the Minsk agreements.

The President of Ukraine Vladimir Zelensky said that the “breakthrough” agreement for a peaceful settlement in the Donbass, made on the eve of the Trilateral talks of the contact group on the settlement (TAG), require additional approval.

According to the Ukrainian President, the agreement must be approved by the leaders “channel four”: Germany, France, Russia and Ukraine.

“We have many professionals who are involved in negotiations in the contact group. They agreed to a very serious step for Ukraine — ceasefire. This document is awaiting the signature of all parties Norman group, and believe that all parties will be signed by Ukraine, France, Germany, the Russian Federation,” he said during a joint with the President of Switzerland Simonetta Sommaruga stay in the frontline at the Village Lugansk.

Moreover, these arrangements should come into force next Monday, July 27.

After reaching these agreements, both Ukraine and the self-proclaimed Republic of Donbass — Donetsk and Lugansk national republics (DND and LNR) said about the “breakthrough”in the negotiation process.

At first glance it is not clear that these arrangements “breakthrough”: the parties committed to a cease-fire in the Donbass. However, this agreement was reached more than once.

Even at the current head of state Vladimir Zelensky exactly a year ago (July 19, 2019) Kiev and the Republic has pledged to provide “full, final and indefinite ceasefire”. But even such big words has not affected the reality on the front. And according to participants of hostilities in the Donbass from the republics, with Zelensky attacks even more frequent.

What has changed, it becomes clear after reviewing the text of the Treaty, which was published by the OSCE. The fact that

Ukraine and the Republic of Donbass for the first time were able to agree on additional measures aimed at maintaining the previously reached agreements on cease-fire.

Just “breakthrough” agreements seven points. The text suggests a ban on offensive and reconnaissance and sabotage actions, as well as a ban on the use of any types of aircraft of the parties; the prohibition of the use of any fire, including sniper. Also prohibits the placement of heavy weapons in the settlements and their vicinity, primarily on the civilian infrastructure, including schools, kindergartens, hospitals, and areas open to the public.

The fourth paragraph of the agreement provides for the obligation to apply disciplinary measures for violation of the ceasefire. On each such occasion it is now necessary to notify the coordinator of the TKG, which, in turn, will notify on ceasefire violations all members of the group.

Thus for the reaction to violations of the cease-fire will be created and involved the coordination mechanism, which will work with the assistance of the Joint center for control and coordination of ceasefire (SCCC).

The sixth paragraph of the agreement States that the return fire in case offensive action is allowed only in the case when it is opened by order of the appropriate leadership of the Armed forces of Ukraine and leadership of the armed forces of the breakaway republics after unsuccessful attempts to use the above-mentioned coordination mechanism.

Most importantly, all these measures must be powered by the special orders of the armed forces and armies of the LC and the DNI.

Moreover, in the agreements it is indicated that all these measures can not be canceled any other orders, including the secret.

The use of military orders — a completely new practice for the regulation of the conflict in the Donbass, which can really break the deadlock the process of ceasefire. The fact that the existence of the order banning military action and shelling will limit the opportunities for those who want the truce to be broken. Because violation of the order entails responsibility up to criminal. Additional control of the TPC and SCCC only enhances the effect.

In addition, a ban on intelligence activities makes it impossible collisions in the so-called “gray area” that the idea is to reduce the contact of the opposing sides to a minimum.

As noted by Vice Prime Minister of Ukraine Oleksii Reznikov, the achievement of these agreements speaks of the return of the parties to the main priority: “security Conditions first and foremost. This is the first item of a set of measures to implement the Minsk agreements. Safety is first, the mode of silence, the ceasefire, and then everything else. This is the main news.”

However, it is important to recall that the news in these agreements. These measures were discussed in the negotiations since the spring, but their implementation strongly blocked by Ukraine.

Observers attribute the position change of Kiev with pressure from Russia and Europe. As noted by the Ambassador of Russia in the TAG Boris Gryzlov, only the intervention directly to the work of the contact group and the firm position of the Deputy head of the presidential administration Dmitry Kozak has allowed to overcome the attempts of Ukraine “again to avoid taking elaborate effective measures to ensure the real observance of the cease-fire.”

Despite the progress made, to talk about the solution to the problem of Donbass is not necessary. The ceasefire is just the first of many items designed to resolve the conflict of the Minsk agreement, which Kiev recently questioned.

As noted in the Ministry of foreign Affairs of the DPR, now Kyiv has blocked the further work of the contact group, refusing to explain their position on the elections in the Donbass. The Ministry said that it completely contradicts the Minsk agreements.

In the framework of the contact group from Kiev demanded to assume unconditional obligations to ensure the removal of all contrary action provisions of the relevant regulations. In addition, the Ukrainian side called to confirm the full commitment of everyone, without exception, the requirements and obligations under the Minsk agreements.

“In response, the Ukrainian negotiators are unable to articulate any clear and logical formal position, thereby blocking the further valuable work of the contact group”,

— pointed out the Minister of the breakaway Republic. While Kiev has not confirmed its willingness to carry out a complex of measures, something to discuss and negotiate on any matters impossible, believe in the Ministry.

In turn, Boris Gryzlov noted that the discussion of any issues in conditions when the Ukrainian Parliament adopted a decision excluding the settlement of the conflict based on the Minsk agreements meaningless.

In the Office of the President of Ukraine after the meeting of the TAG said that the elections in the breakaway Donetsk and Lugansk national republics (DND and LNR) is possible only after the restoration of Ukrainian control over the border with Russia.

Now Zelensky said that for Ukraine is important information for each item of the Minsk agreements. “We want to decrypt each item of Minsk, then we know or will see — in a state we can do that or not, how are we going to accomplish, who is responsible,” he said.