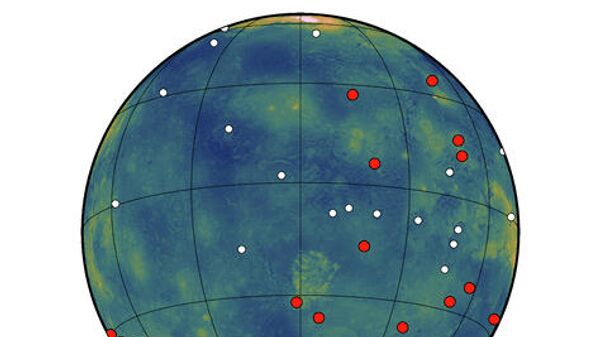 American and Swiss scientists have proved that in the depths of Venus is still active internal processes associated with mixing substances. The study is published in the journal Nature Geoscience.

It is known that the surface of Venus was formed later than Mars or mercury, the inner part of which has long been cold. At a recent internal activity of the planet indicate a ring-shaped structure known as the crown.

They are believed to have formed when jets of hot material from the subsoil broke through to the surface — similar to mantle plumes of Earth that rise through the mantle and the crust form on the surface of a chain of volcanic Islands such as Hawaii or the Canary. Although scientists recognize that the mechanisms of formation of terrestrial mantle plumes and deep hot jets of material on Venus can be fundamentally different.

Until recently, planetary scientists thought that Venus had cooled, and geological activity in her bowels stopped, and the crust was strong enough that no warm material can not break through to the surface.

New research conducted by American scientists from the University of Maryland, together with colleagues from the Institute of Geophysics of ETH Zurich, found on the surface of Venus 37 crowns with fresh signs of volcanic structures.

“The first time we can say that this is not ancient volcanoes, and their current, possibly dormant at the moment, but not dead — presented in a press release of the University of Maryland one of the authors of the study Montesi Laurent (Laurent Montési), Professor of Geology. — This study substantially changes the view of the Venus — now we’re saying it’s not a frozen planet, the material of its inner portion is still mixed and can feed many active volcanoes”.

The authors have built a detailed digital model of the mechanical activity of internal parts of Venus, necessary for the formation of crowns. The simulation results showed that the different crown on the surface of the planet reflect the different stages of its geological development, which has not yet ended — in the depths of the ongoing activity.

“The increased granularity of our models compared to previous studies allows us to identify several stages of evolution crowns and to determine the diagnostic geologic features that are present only in the currently active. We can say that there are at least 37,” says Montesi.

Active corona on the surface of Venus are grouped in several areas indicating the areas of greatest geological activity. According to researchers, this provides important information to create models of the internal space of the planet, and will also identify target areas for study during future missions to Venus, for example, the European EnVision the space station, whose launch is scheduled for 2032.