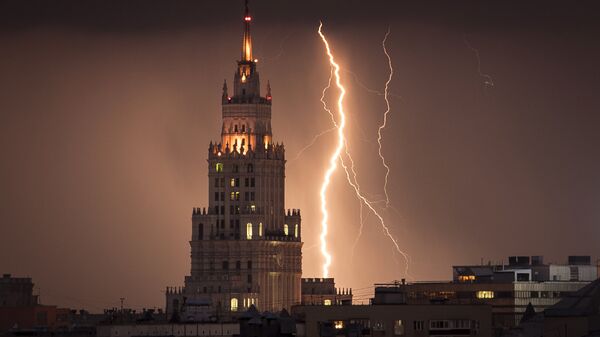 Alfia Enikeeva. Due to global warming storms happen more often, and lightning, even where they previously never had. About what is happening in the atmosphere and how it affects nature — in the material RIA Novosti.

In August of last year, the North pole was a severe thunderstorm, during which lightning struck 48 times. The national weather service even issued a special press release, noting that this is the Northern most storm in the entire history of observations, and this amount of lightning and does an incredible event.

The fact that the intensity of the atmospheric electric discharges characteristic of the tropics, where the sun strongly heats the earth’s surface and lifts up a large mass of moist air. The friction particles in them, and accumulates electricity. In Northern latitudes it is usually impossible, and therefore, according to the researchers, the mechanism of a thunderstorm here was different.

Most likely, in the middle layers of the atmosphere have formed a warm and moist air. It is the result of global climate change, experts say. Abnormally warm weather in the Arctic in the summer of 2019, the accelerated melting of sea ice and the smoke from the unprecedented forest fires has led to the fact that the North pole was a tropical thunderstorm broke out.

In 2014, scientists at the University of California at Berkeley (USA), analyzing measurements of the density of the clouds, came to the conclusion that in this century the number of atmospheric electrical discharges in the world will increase significantly. In some parts of the world — for example, over the continental United States half. According to estimates by the authors, the increase in air temperature by one degree Celsius increases the amount of lightning by 12 percent.

The warmer the atmosphere, the more moisture. Wetter than the air, the higher the probability of thunderstorms…

The specialists of Stanford University, examined data from the global project on comparison and analysis of the CMIP climate models, launched in 1995, found that even with a slight warming of the air generating conditions conducive to severe thunderstorms. Especially in spring and autumn.

In addition, climate models predict that in the next few years on the East coast of the United States will increase the risk of hurricanes and tornadoes.

According to researchers at the University of Houston, the severe weather, including powerful storms and hurricanes arise from the fact that the warming effect on the Lorentz cycle — the process of turning the potential energy of atmospheric heat into kinetic energy of air masses.

Based on data from climate satellites, NASA and DoD received from 1979 to 2013, found that heat transfer and conversion from one form of energy into another accelerated and the excess faster turn into storms, hurricanes, cyclones, anticyclones.

Meteorologists at the Massachusetts Institute of technology (USA), involved in the same problem, predict an increase in the number of powerful storms and windless days. This, in turn, will negatively affect the urban life of the Northern hemisphere.

Scientists using climate data satellites and ground tracking stations, found that the average level of potential energy stored in the atmosphere of the middle latitudes was reduced by a half percent every ten years. This can lead to a dramatic weakening of cyclones in temperate latitudes, the reduction of the heat transport from South to North, increased torrential rains and storms. And thunderstorms will be more.

And that’s bad news for nature. Half of the wildfires is the result of a lightning strike.

In addition, thunderstorms can affect greenhouse gases in the atmosphere. On the one hand, will increase the amount of ozone. On the other, when lightning produces nitrogen oxides, decreasing the concentration of methane.