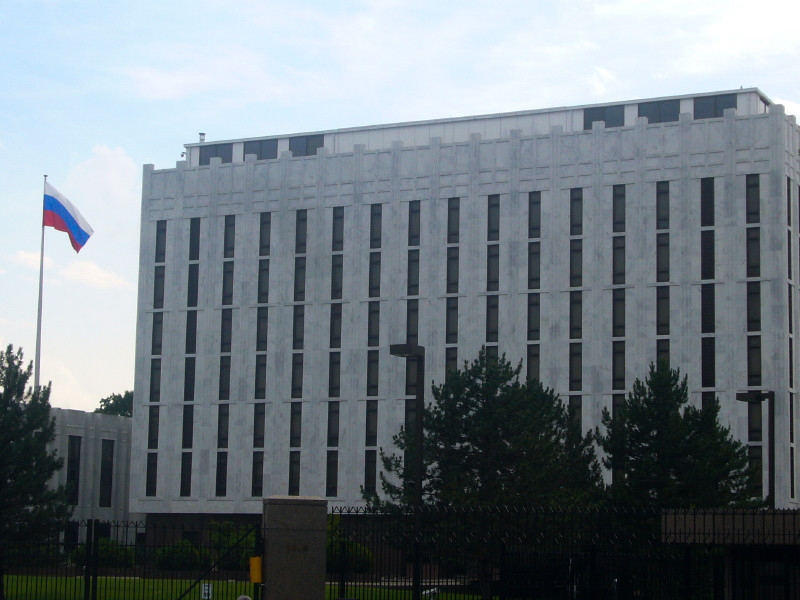 The Russian Embassy in the United States sent the state Department a note of protest in which demands to conduct a thorough investigation into the attack on journalists of the First channel in Portland, Oregon.

“This outrageous fact to the state Department sent a note of protest. We demanded to conduct a thorough investigation and to inform about its results”, – said the Russian Ambassador to the U.S. Anatoly Antonov. His words are published on the website of the Embassy in Facebook.

According to him, “reporter Julia Olkhovskaya and operator Vyacheslav Arkhipov was subjected to unacceptable treatment by the local police.” “Employees of the press loud and clear identified himself, showed documents to the press of the card and not put up any resistance,” – said the diplomat.

According to him, the Embassy “promptly contacted the Russians.” Their health status is “no cause of concern, medical care is not required.” “Encouraged them to keep the warring parties at a safe distance, – said Anatoly Antonov. – We will ensure that this incident was considered by human rights organizations that monitor violations against media workers in the United States.”

The Russian diplomat referred to the human rights defenders, according to which “the number of incidents with the press already exceeded 500 cases.” “This year, the United States is clearly out on this indicator in the leading position in the world. I want to note that solidarity, or at least moral support to our journalists from local media workers here do not receive”, – concluded Anatoly Antonov.

It noted that both the employee and the channel were in possession of a press card. The journalists were from the local court, where they filmed a report on the riots.

Yesterday she was on a talk show “Time will tell” on the First channel said that on the 55th day of protests and unrest in the US anarchy. “Nobody controls nothing and the streets turn into a war zone”, she said.

According to the Russian journalist, the radicals of the movement “Antifa” attempted to set fire to a Federal courthouse. At this point, the security agencies and attacked journalists who were filming the flaring flame. Olkhovskaya explained that the security forces grabbed her by the head and threw him to the ground and pulled off her helmet. The journalist added that scratched the fingers and leg.

Protests against racial discrimination and police violence started in Portland more may 25, after in Minneapolis killed an African American, George Floyd, and since a spontaneous rally near the building of district court was held every day, collecting hundreds of local residents.

Day protests more like a festival: protesters danced, sang and communicated with each other. Night at the County court was about radicals. In the US independence Day, July 4, the protesters pelted the building with stones and fireworks, and a few days around the court complex tried to build makeshift barricades.

The local police tried to intervene. After the attempted arson on July 4, for example, the city of Portland announced the introduction in the city centre of special regime, but found it necessary to clarify that the police approached the protesters, as there was no identified threats to the security of life.

At the beginning of July in Portland, the largest city of Oregon on the West coast of the US, there were armed people in camouflage uniform without insignia. These units are included in the newly created division of the Ministry of internal security of the United States. There are employees of the U.S. marshals, and customs and border services.

Few weeks, they patrolled the area around the Federal district court, moving around the city in vans without number plates or any insignia. On the form of unknown military – brand new stripe with the inscription “police”, but, contrary to accepted in America rules, no names, no names of units.

When the protesters approached too close to the court, on the steps of the complex there were people in camouflage. They used tear gas, dispersed demonstrators with batons and used rubber bullets and mini-grenades of pepper gas. 12 July in the Internet appeared the footage, which shows how one of the protesters received severe head injury after a shot with a rubber bullet.

In the last days of these patrols changed tactics and began to act more actively. 18 Jul 53-year-old retired officer of the U.S. Navy, the first time joined the protest, tried to talk to the feds, but was severely beaten with rubber batons and suffered multiple bone fractures. After that, the downtown Portland real war broke out between demonstrators and unknown military, writes the BBC Russian service.

July 20, at the building of the regional court gathered several thousand demonstrators. Prior to that, the city held peaceful marches in which the participants chanted “Black life is important” and “Federals, go home!” Such processions are headed by members of the spontaneous movement, “the Wall mothers” that occurred in Portland a few days ago. On the night of July 18, several hundred women in Cycling helmets joined hands and rose up the chain between the protesters and the units of the unknown military. In hands they held posters “the Feds don’t come here are mothers!” and “Leave our children alone!”

One of the posters posted on Twitter, said, “the Feds – the instigators from outside”.

Local authorities and parliamentarians also suspected the security forces of the feds in the use of unnecessary violence and unconstitutional action. The Prosecutor of the state of Oregon filed a lawsuit against the Department of homeland security and several agencies, saying that the men in camouflage uniforms illegally and aggressively detain people. The court addressed and most influential human rights organization, believes that such detention amounted to kidnapping.

The state of Oregon and the leaders of the U.S. Congress demanded that President Donald trump to withdraw Federal paramilitary units sent into the city of Portland to contain protests.

In response, the US President called the actions of unidentified military excellent work, promising to send the same units to other cities. In the list were new York, Chicago, Philadelphia, Detroit, Baltimore and Oakland. City hall all of these cities are headed by politicians-Democrats. “These cities are controlled by liberals and are controlled by very stupid,” said trump, explaining that he intends to end the “rampant anarchists and agitators.”

The speaker of the house of representatives Nancy Pelosi on Twitter called men in army camouflage uniforms “stormtroopers, kidnapping citizens.” And the Governor of Oregon Kate brown praised the actions of the Federal administration as political theater, played out in order to strengthen the position of the trump before the election.

The Senator from Oregon Jeff Merck also said in social networks that only authoritarian regimes use against demonstrators units that hide their faces and their affiliation.