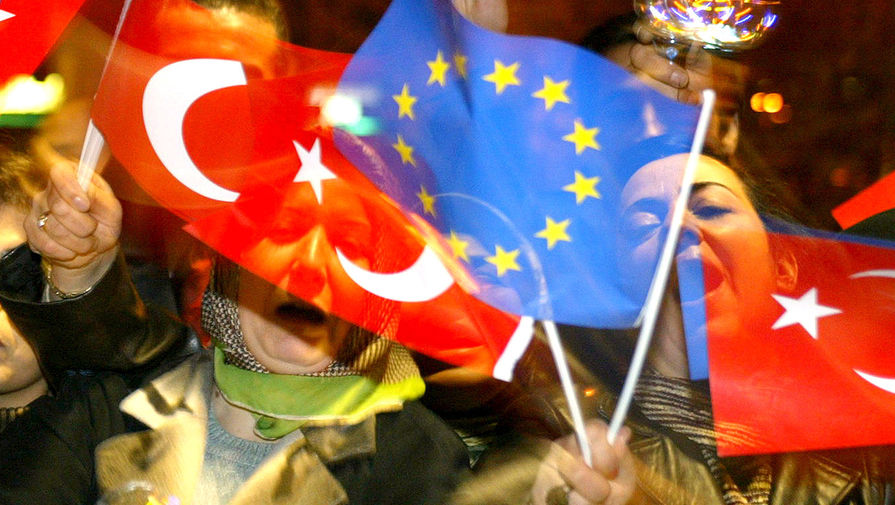 In the relations between Turkey and the European Union there are more reasons for disagreement. It’s not just about Ankara’s actions in Syria and Libya, its policy affects the interests of the members of the Commonwealth of Greece and Cyprus. The response of the EU in General remains soft. Brussels is in no hurry to move on to serious action for fear of consequences which can result, for example, economic sanctions. Meanwhile, relations between the parties deteriorate more and more, and the EU loses an important strategic partner in the middle East.

Relations between Turkey and the European Union continue to deteriorate, and the prospects of Turkey in the Commonwealth are becoming more elusive. The parties have already openly demonstrate an outright hostility to each other, between the EU leaders and the President of Turkey periodically there are public squabble, and Ankara, apparently, has not considered the opinion of Brussels on certain issues. The process began four years ago, and, as it seemed then, with positive developments for both parties.

When in 2016 the EU desperately tried to resolve the immigration crisis, he turned to Turkey. The parties entered into the agreement on the admission of refugees, expelled from European countries, Turkey has pledged to discourage irregular migration.

In exchange, Ankara has been promised funds to aid in the maintenance of refugees (€6 billion), a visa-free regime, subject to certain conditions and activation of the negotiations on one of the criteria for Turkey’s accession to EU — availability of adequate financial resources.

A month later, German Chancellor Angela Merkel, and who was at that time a post of the head of the European Council, Donald Tusk, visited a camp for Syrian refugees in the Turkish province of Gaziantep. Media published photos of European politicians with refugee children and their warm reception in Turkey. At the press conference, Merkel and Tusk announced a sharp reduction in the flow of illegal migrants and that Ankara showed the best example of caring for the needs of migrants.

In Berlin, the German Chancellor returned with relief — “open door policy”, which it advocated, has caused a split within the EU, the growth of nationalist sentiment and strengthening of positions of right-wing politicians, eurosceptics.

Turkey continued to carry out properly their part of the contract: in 2016, the flow of migrants has sharply declined and continued to decline in 2015 from the Turkish coast in Europe was attended by 860 thousand illegal immigrants, but for the first half of 2019 — a total of 11 thousand One of the reasons for this trend, and was the conclusion of an agreement between the EU and Turkey.

At first, no problems with payments of the European Union, but the fulfillment of other obligations not moved, however, to formally complain to Ankara was not what visa exemptions are tied to the implementation by Turkey of a number of conditions.

In 2017 the European Union said that the policy of the Turkish government violates the Copenhagen criteria required for EU membership, and in 2018, the EU Council announced that “Turkey is increasingly moving away from the European Union.” In Ankara grew irritated. Turkish President Recep Tayyip Erdogan and other government members moved on to threats to stop the implementation of a meaningful EU agreement.

In March this year, Erdogan, citing delays in payments from the EU and the new flow of Syrian refugees, with whom Ankara can not cope after the occurrence of Bashar al-Assad on the last enclaves of opponents, decided not to hinder the passage of illegal migrants to Europe. The borders were open, the refugees poured into Europe, the European Union argued that it complied with all its obligations and has urged Ankara to do the same.

Brussels is losing influence on Turkey

Irritation of Turkey led to the fact that it has ceased to reckon with opinion of the European Union, particularly in matters concerning its interests. In October, Ankara launched a military operation in the North of Syria, without the approval of their allies, then the President of France Emmanuel macron said about “brain death” of the Alliance.

“The President of France, Mr. macron, I say to you in Turkey, and I will say to NATO: first, check your own head on the subject of brain death,” — said Erdogan.

The foreign Ministry of France, the words of the Turkish leader was viewed as an insult, the Ministry has also summoned the Ambassador of Turkey.

Soon Ankara intervened in the inter-Libyan conflict, where the confrontation takes place between the national consensus government (NTC), headed by Fitom Barragem and the Libyan national army (LNA) led by the Khalifa the Haftarot.

At the end of last year, Turkey PNS approved and signed in November a Memorandum on military cooperation and on mutual understanding on Maritime zones.

According to the document, Turkey can at any moment to put their troops, if requested by Sarraj. Before that, however, is not reached, however, Ankara has sent additional weapons and military advisers, despite the fact that the result of the Berlin conference on Libya, was the confirmation of embargo on arms supplies to Libya, and the refusal to provide military assistance to any of the parties to the conflict.

The participation of Turkey changed the course of the conflict, the Haftarot has lost key positions and expressed their willingness to resolve the situation.

In March, the EU began a naval operation “Irini”, aimed at enforcing the arms embargo. EU high representative Josep Borrell has repeatedly said that the operation is not directed against any one side, but only Turkey is supplying weapons to Libya by sea.

Soon began to appear the news that the Turkish vessels in the Mediterranean sea, waive inspections and create a risk of violation of stability in the region. Emmanuel macron once again declared “brain death” NATO, Ankara is again sharply replied. The greatest discontent of the countries-EU members showed Greece, which has recently been forced to defend their interests against the encroachments of the same Turkey.

Memorandum on military cooperation and mutual understanding on Maritime zones between Ankara and the NTC does not recognize the right of Athens on the shelf in the area between the Islands of Rhodes and Crete.

Meanwhile, Turkey’s claim to this territory connected with local oil and gas reserves. Since November of last year, Ankara is offshore drilling off the coast of Cyprus. Earlier, Turkey announced plans to begin exploration of offshore oil in Greek territorial waters.

Athens to defend their interests, has declared its readiness for military action in the conflict with Turkey.

Emmanuel macron has called on to “punish” Turkey for the violation of the sovereignty of Greece and Cyprus in the Mediterranean.

“In this part of the Mediterranean, which is vital for our two countries, issues of energy and security are important. It is about the struggle for power, in particular, Turkey and Russia, which more and more assert itself and to which the EU is still making too little. For those who are involved in this, must impose sanctions,” — said the French leader, hosting the President of Cyprus Nikos Anastasiadis.

The European Union is trying to find a middle ground

However, the sanctions did not come. Not to say that the European Union beyond the strict statements. In November last year, the European Council approved a list of restrictive measures in response to Turkey’s drilling in the Eastern Mediterranean sea. The sanctions include travel bans and the freezing of assets of persons responsible for carrying out the exploration.

In addition, Brussels has suspended talks on a Comprehensive agreement on air transport, was postponed indefinitely in dialogue at the highest level between the EU and Turkey and reduced financial assistance to Ankara by three quarters.

The last demonstrative gesture on the part of Turkey was her decision to return to the Hagia Sophia and the status of the mosque, which caused outrage in Greece and other EU members.

In General, the approach of Brussels to the actions of Ankara looks soft. And it has its own reasons. First, the EU thinks about the negative consequences that may result in harsher policy towards Turkey, said the Professor of European law at MGIMO Nikolai Topornin.

“In the past strong investments in Turkey and many countries do not want to lose such an important economic partner, and, of course, they didn’t welcome such severe sanctions, — said the expert. — Probably believe in the European capitals that we must try to make maximum use of political and diplomatic options without resorting to economic sanctions, because they boomerang can hit the EU.”

In the context of a pandemic coronavirus COVID-19, and looming over the world the economic consequences from it, sanctions against such a large trading partner, Ankara, look unwanted option in the first place, for the EU, said Topornin.

The EU, by and large, expresses the conviction at the words, and, basically, forces the President of France. Other measures, which went to the EU, are simply not able to force Turkey to reckon with the opinion of the West. To date, the only result, which is caused by the policy of the Commonwealth, — the deterioration of relations between the parties and the loss of any levers of influence on Ankara. Meanwhile, Turkey is increasingly becoming a significant player in the middle East and, gathering influence, it would greatly help the EU in certain issues.

For example, the Turkish intervention in the Libyan conflict, on the one hand, exacerbated the situation, exacerbating hostilities. On the other hand, Ankara’s support also helped the UN recognized the government of national consensus to resist the Haftarot and it has announced the operation to seize the capital.

Now the LDF is showing signs of readiness to settle the conflict. Given the fact that the Libyan issue has involved and external actors to resolve the situation will not be easy. But with the right approach of the EU towards Turkey, Brussels could directly participate in ending the conflict and even to force Ankara to work for its interests in the middle East and the Mediterranean area, where affected interests, at least three of its members — Greece, Cyprus and Italy. Probably, in particular, guided by these considerations, the EU is trying to find a balance in the approach to Turkey, however, while geopolitical environment, this policy has only disadvantages.