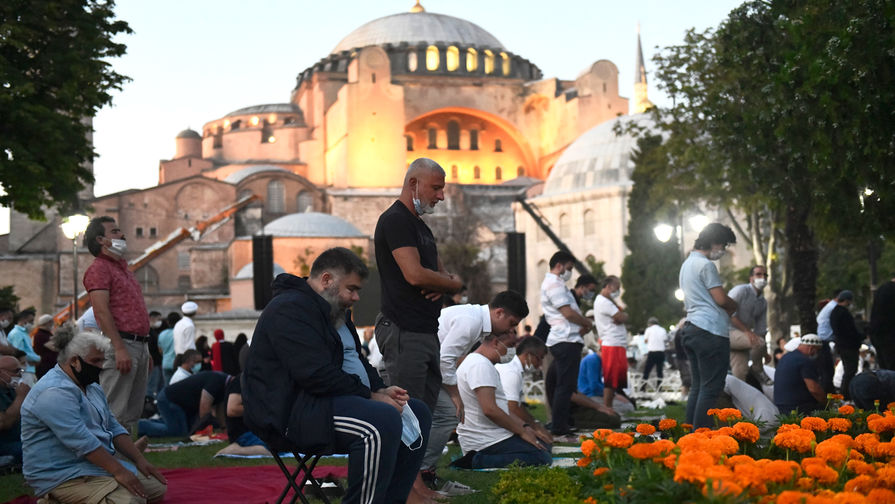 In the Hagia Sophia in Istanbul on July 24 for the first time in 85 years, will be held Friday prayer, which will again reinforce the most important for the Christian world by the object status of the mosque. In the Liturgy should take part the President of Turkey, Recep Tayyip Erdogan, who called the transformation of the Cathedral-Museum into a mosque “revival.” The experts still cannot come to a consensus as to why Ankara has changed the status of Hagia Sophia.

In Istanbul’s Hagia Sophia (Hagia Sophia) on 24 July will be the first for 85 years Friday prayer. As expected, it will be attended by President Recep Tayyip Erdogan and about 500 people. In addition, in Sultanahmet square in front of the Cathedral will gather thousands of believers.

The conversion of the famous Christian Cathedral within the mosque occurred on 10 July when the state Council of Turkey stripped Hagia Sophia of the status of the Museum, which operated from 1935. The same day Erdogan signed a decree on the transfer of the building to the Turkish Directorate for religious Affairs and requested to open Aya Sophia for worship.

The Museum of the Cathedral became the founder of the Turkish Republic Mustafa Kemal Ataturk. He linked his decision with the creation of a secular state.

Erdogan also return the status of the Hagia Sophia mosque compares with its revival and dropping “shackles with her feet”.

Hagia Sophia was first converted into a mosque in 1453 after the conquest of Constantinople by the Ottomans. Until that time, since its inception in the year 532 Hagia Sophia was one of the key temples of Orthodox Christians, and to this day the Cathedral is of great importance for the whole Christian world.

Return the Cathedral to the status of the mosque has predictably caused negative reactions from the representatives of the Christian churches. For example, against this step of Ankara were made by the head of the Orthodox Church of Constantinople Patriarch Bartholomew. According to him, the Cathedral is an important cultural heritage that should belong to “all mankind”.

The outrage by Turkey’s decision expresses not only the Christian world. The fact that the Cathedral is part of UNESCO world heritage and this is how the Hagia Sophia was one of the most popular attractions not only in Istanbul but all over Turkey.

The main concerns of critics of Ankara were concentrated in that Hagia Sophia as a mosque will no longer be a visit for tourists, and preserved the Christian mosaics and frescoes can be “painted over or covered up”. Turkish authorities claim that access to the historical monument for tourists will be preserved, and its interior will not be touched.

Although, as the Turkish media, during the first Friday prayers of the Christian mosaics and frescoes, preserved in Hagia Sophia will be darkened with the help of special lighting or just the closed curtains.

The main opponent of plans of Erdogan became Greece. Relations between the two countries in General can not be called good, and change the status of a Cathedral only added to the tension.

As they said “Газете.Ru” senior researcher, Institute of world economy and international relations Victor Nadein-Rayevsky, Hagia Sophia is a landmark phenomenon, and sacred place for the Greeks.

“Their indignation is understandable. In the entire history of the Turkish Republic, in fact, no attempt on the status of Hagia Sophia. The current dispute over the Cathedral can be called a trigger, which actuates the whole complex of contradictions” — said the expert.

Anger Greece partly coincided with the opinion of other European countries, which, again, was joined by representatives of various Christian organizations. However, Erdogan has taken a tough stance and called the status of a Cathedral an internal affair of Turkey, calling on other States to respect the decision of Ankara.

By the way, in Russia the reaction to Ankara’s actions were different.

In particular, a number of local Christian churches, including the Russian Orthodox Church, expressed regret because of a change in the status of Hagia Sophia. The Kremlin is the desire of Turkey to transform a Cathedral into a mosque has been dubbed an internal affair of the Republic.

“It’s important for us to Hagia Sophia as a monument a UNESCO world heritage site was saved in the form in which it is now, and that admission was open to those who come to Turkey. We have heard statements of our Turkish colleagues , that the Hagia Sophia will be maintained and that access will remain open,” — said the press Secretary of the President of Russia Dmitry Peskov.

The purpose of the changes

The Turkish side has indeed promised to preserve access in the now the mosque for tourists, moreover the entrance is free, and all the mosaics and frescoes will remain intact. It is unclear how this will be combined with the conduct of worship, probably they will hang in the upcoming Salaat.

Overall, Erdogan’s move to change the status of the Cathedral to explain hard enough, although he was a year ago talked about such plans. Various Western commentators differ in their opinions on this issue. For example, one of the versions is that

Ankara allegedly follows the policy of deterioration of relations with the West, primarily with the European Union.

This assumption is supported by a controversial Turkish leader — excavations on the disputed continental shelf in the Mediterranean sea, active participation in the Libyan conflict on the side of the national consensus government and pass middle Eastern migrants in the EU.

All of this in one way or another unnerving Brussels, but that’s what the purpose of this policy is unknown. Perhaps in this way Turkey “revenge” for the EU for the deadlock in negotiations on the accession of Ankara to the Union, although no official confirmation of such a theory is not.

A second popular option for the political situation in the Republic of Turkey. How wrote the local media,

due to the conversion of Hagia Sophia into a mosque, Erdogan is trying to rally around the electorate of his Party of justice and development party (AKP), which has recently lost rankings.

According to the June survey MAK Consulting, the loyalty of the people to the AKP is 30%, which is 12% less than the results two years ago when in Turkey parliamentary elections were held. The figures of the main opposition Republican people’s party grew significantly: it is supported by 25% of respondents versus 22% in 2018.

With the transformation of the Cathedral from a Museum into a mosque, Erdogan might try to play on the national sentiment of the Turks. Many residents of Turkey see Hagia Sophia a symbol of conquest of Constantinople — an example of the superiority of the Ottoman Empire over Europe.

However, this theory again does not find any evidence, and until new parliamentary elections in Turkey for more than three years. Currently, one thing is clear, the criticism and the attempt of pressure from the West are unable to prevent the conversion of important for the Christian world of the Cathedral into a mosque. Perhaps, today’s Friday prayer will finally put an end to this issue, at least at the time of the presidency of Erdogan.