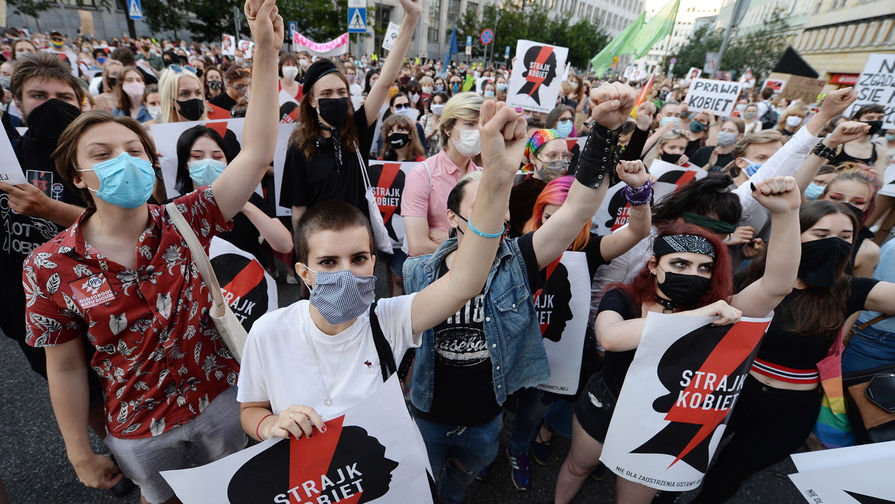 Warsaw initiated the procedure for withdrawal from the Council of Europe Convention on combating violence against women. The Minister of justice of Poland argues that the standards for combating this phenomenon in the country is better than in other countries of Europe, and the dissatisfaction of the authorities call the “hidden meanings” for the education of youth in the framework of the non-biological role of sex. What else causes a disturbance of Warsaw — in the material “Газеты.Ru”.

Poland plans to withdraw from the Council of Europe Convention on preventing and combating violence against women and domestic violence (the so-called Istanbul Convention). The appropriate process Warsaw launched on 27 July, said the Minister of justice Zbigniew Ziobro.

“Today I submitted an application to the Minister with Parliament, the labour and social policy on early action to withdraw from the Convention. In Europe there is no country where the standards of prevention of violence against women are respected better than in Poland. This is an example of how standards can be implemented without the influence of ideology,” said the Zebra, adding that the document is present and “another part of the” hidden under the beautiful slogans.

Under the second refers to the ideological component, rests on the fact that the role of gender lies not in the biological plane, and this promise is “questioning the institutions of family, faith.”

The Polish Minister stressed that the document “cannot derogate from the norms of Polish law”, RIA “Novosti”.

According to Polish politicians, the document imposing on the country a controversial ideology against gender stereotypes, which does not meet the current views of Poland on the family tradition.

“These provisions suggest that biology does not determine to become human, and that it is a question of socio-cultural choice. These provisions also call for corresponding changes in the education of children in schools and after-school programs so that young Polish generation took these false, in our view, the provisions”

— Polskie Radio quoted the words of the head of the Polish Ministry of justice.

The Convention, which rejects the current Polish administration, is formulated minimum standards for the prevention of violence, protection and prosecution. In particular, governments that have acceded to the Convention are obliged to protect and support victims of such violence, and to establish hotlines, shelters, to provide material, psychological and legal support to victims of violence. The Convention was approved by all 47 member countries of the Council of Europe on 11 may 2011, has signed and ratified the agreement, 34 States and a further 11 had signed but not performed the procedure for ratification.

In fairness, it should be noted that the ruling party “law and justice” (“IPR”) have distanced themselves from the proposal of the Minister of justice of Poland, stating that “not all members of the coalition voted for it.”

Statements from Poland have been met with strong criticism in the European political structures. So, the Secretary General of the Council of Europe Maria pejčinović-Buric said THAT “alarmed” by the news from Warsaw. She called the move “highly regrettable” and “a huge setback” for the protection of women.

In Poland citizens also actively show discontent with the government’s plans. On July 24, when this decision was announced, the streets of Warsaw came out 2000 people to protest against the plans of the Cabinet. Similar events were held in several other Polish cities.

“The goal [of withdrawal] is the legalization of domestic violence,” he told Reuters one of the organizers of a protest in Warsaw last week of March, Lampard. Some of the protesters carried placards with the inscription: “Peace” is hell for women.”

However, claims from critics of the Convention in Warsaw, indeed, not connected with that part which relates to the protection of women from domestic and other types of violence (although, of course, the rejection of the obligations of the state to provide standards for such protection enshrined in the Convention level, makes partners of Poland issues).

More irritation among opponents of the document is the fact that it allegedly violates the rights of parents, requiring schools to conduct training on gender roles, the meaning of which is contrary to family values which are actively promoted and relied upon by the current Polish government.

The controversy over the Convention began in Poland literally in the same year when the document was signed, in 2015. The fact that the signature on the agreement put the former leadership of the country headed by a centrist party, Civic platform, however, in the same year in the role of the ruling party replaced the conservative “law and justice”. Representatives of the “Peace” literally immediately announced plans to bring the country out of the Treaty.

The ruling party and its coalition partners are working closely with the Catholic Church and to promote a conservative social agenda. So, in fact, the current leadership of the Republic actively exploits not only the subject of domestic violence (and externally imposed standards on this issue), but the problems of the LGBT movement and women’s rights to abortion.

The current government has consistently maintained that the requirement document for teaching in the school of social policy in the liberal manner is disrespectful towards religion. Attempts to withdraw from the agreement she made before, but the idea was never brought.

In fact, the current intention of the Polish authorities to withdraw from the Convention on the prevention of violence against women can be interpreted as one more element in the confrontation between Warsaw and Brussels, which lasts not the first year.

In 2017, the European Commission took a rather unusual step in the framework of the European Union in relation to Poland, initiating a court case against the “Peace” that the EU was accused of undermining the basic values of the Commonwealth. Dissatisfaction with the European Union called judicial reform in Poland. In the worst case Warsaw may temporarily lose voting rights in the Council of Europe.

Under the current leadership, the Minister of justice received the authority of the attorney General that gave him exclusive authority over judicial investigations.

This situation causes irritation of the in Europe not only because of a deviation of Warsaw from the liberal policy of Western countries, but also due to the fact that Poland is one of the largest recipients of subsidies from the EU budget. Some members of the Association are linking these payments with the observance by Poland of the principles of the Union enshrined in various treaties.

However, the Polish government under the leadership of “Law and justice” ready for an open confrontation with Brussels, which apparently finds support from the population. This is evidenced by the results of the last presidential election, a victory which was won by Andrzej Duda, is closely associated with “Peace”.

His victory was sufficiently fragile as to be re-elected in the first round, he failed and the results of the second round was intrigue until the publication of the first exit polls: pollsters put the odds of Duda and his opponent — the candidate from “Civil platform” of Rafal Trzaskowski — how is relatively equal.

As a result, in the second round, held on 12 July 2020, a victory by a margin of just over 2% scored Duda (51,03%). These results can be assessed as rather controversial, however, the final turnout in the second round of 68.18% shows quite a clear mandate of the incumbent President on the implementation of its policy.

As a result, until the next election (i.e. until 2023) “law and justice” also had the opportunity easy enough to implement his plans in life, that would be very difficult with a victory Trzaskowski, provided that the President in Poland is endowed with the right of legislative veto.

The policy of “IPR” is rather controversial, both inside Poland and in the EU as a whole, informs “bi-Bi-si”. However, the grounds for support of the current authorities with the population there.

The actions of “Law and justice” can be traced quite obvious reliance on the Catholic tradition that is met with understanding among the residents of small towns of Poland.

In this context, it is quite close to the electorate by the promise of becoming Duda statements about the continued strength of the state, “built on lasting traditions, sacred for all of us and in which we were raised for generations”.

And therefore a logical continuation of this policy is the attitude to the European Union as “an imagined community from which [Poland] little wins”.

In the face of the pipe clear to the poles and the continuity of government in 2005, when “Peace” came to the leadership, the current President was an assistant to former President Lech Kaczynski, who died in 2010 plane crash near Smolensk.

Duda was supported by popular in Poland governmental welfare program, under which each family receives 500 zlotys (about $125) per month for each child under the age of 18 years.

A number of these factors became the part of Polish population that was able to get out of poverty, a certain symbol of concerns of the authorities about the residents, which is particularly true for villages and small towns, where the greatest support is received by the Pis, and where the most votes at the last presidential election scored Duda.

And because “Peace”, based on its key constituency, exploited the rhetoric of traditional values, which, in addition to trying to avoid sex education in schools “liberal patterns” (in fact, the main claim to the Istanbul Convention, which Poland intends to withdraw), designed to protect the traditional institution of the family.

Literally during the election campaign, the players have been criticized by European countries for what he said about the protection of the Polish families from imported “ideology of LGBT”, which, according to him, is trying to aggressively sexualize children.

And the very “ideology of LGBT,” he called even more destructive than communism.

By the way, full of sex education in Polish schools no. Instead, students are offered broader content courses “family education”, often under the guidance of priests and nuns.

Another direction of protecting the traditional family institution in Poland — the tightening of legislation in regard to abortion, which is one of the most restrictive in Europe.

The current law was adopted in 1993, and it involves only three reasons for abortion: if it threatens the life and health of the mother, if the conception occurred as a result of rape or incest, or if the embryo has grave defects.

In April in the first reading a bill that sparked the protests, despite the restrictions imposed by the Polish authorities due to the spread of COVID-19. According to the document, the defects will no longer be grounds for abortion. For the doctors who will carry out the procedure of abortion contrary to the requirements of the act, provides for criminal liability in the form of deprivation of liberty for a term from six months to eight years.