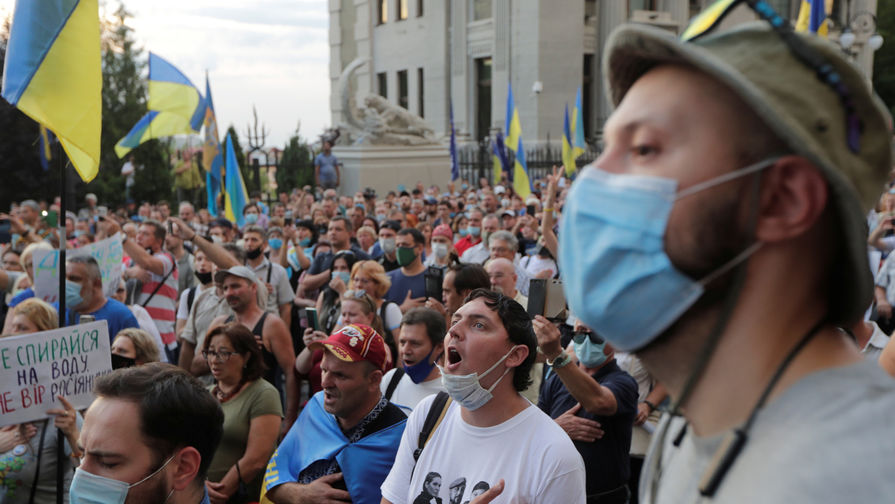 Hundreds of Ukrainians took to the streets of Kiev in protest against a new large-scale truce in the Donbass. The demonstrators have accused Vladimir Zelensky of treason and demanded to stop the “surrender”. Particular anger among activists caused the negotiations of the President of Ukraine with Vladimir Putin, which expressed the desire of Kiev to return to the implementation of the Minsk agreements to resolve the conflict. Why Zelensky suddenly stepped up the peace process in the Donbass, to understand “Газета.Ru”.

Hundreds of Ukrainians came out to protest at the office of the President of Ukraine in Kiev. The demonstrators accuse President Vladimir Zelensky treason for a full truce in the Donbass. One of the organizers of the protest were the party of “European solidarity” the former President of Ukraine Petro Poroshenko, however, the predecessor Zelensky at the rally was not.

The ex-President instead of supporting the protesters went with his family to Turkey on holiday, only commenting on what is happening in social networks. While activists accused Zelensky serious enough offence, despite the positive message of the truce.

So, in the text of the statement on the beginning of the action stated that the President of Ukraine allegedly forbade the army to defend their own country and became “the servant of Russia”.

“Isn’t that all the efforts and sacrifices of the Russian-Ukrainian war for six years was in vain? The Ukrainian army attacked from the rear. It attacked people by last name Zelensky”, — stated in the document.

At the end of the text calls for Ukrainians to take to the streets to protect the APU. Also, the organizers propose to Zelensky say that “it’s time to collect suitcases and to go to Rostov” — the last is a reference to “escape” to Russia of the President of Ukraine Viktor Yanukovych in 2014 because of the coup.

On the protest, protesters put forward a number of requirements to Zelensky to stop disarmament at the forefront, to cancel an order not to open fire in response, to give an order to destroy the enemy force in response to attacks, increase funding for the military, not to go on the demand of Moscow on carrying out local elections and the granting of special status to the Donbass, and also to initiate an investigation under article 111 (high treason) for a truce in the South-East of Ukraine.

The reaction of the party “European solidarity”, other opposition forces and radical movements on the truce in the Donbass, in General, was not unexpected. The so-called “party of war” is extremely sensitive about any efforts of Kiev on the peaceful settlement of the conflict in the South-East of Ukraine in accordance with the Minsk agreements.

Repeats the situation last year, when breeding forces in the Donbass, coupled with the signing of the “formula Steinmeier” — involving the granting of special status beyond the control of Kiev territories of Donetsk and Lugansk regions — led to mass protests of nationalists and opposition.

This time the situation is compounded by the fact that the truce, the parties entered into not traditional, but more fulfilling. So, according to the document, a ban on offensive and reconnaissance and sabotage actions, the use of aircraft the use of any fire, the placement of heavy weapons in populated areas.

In addition, the parties agreed to impose disciplinary measures for violation of the regime through the tripartite contact group on settlement (TAG). In such cases, it will involve a coordination mechanism with the assistance of the Joint center for control and coordination of ceasefire.

Return fire is allowed only in case of impossibility of use of the new mechanism, and only by command of armed forces of Ukraine or the breakaway DNI and LC. The most important point of the agreement — a truce is driven by sparpreisen leadership of the armies of the parties, and they cannot be cancelled.

Agreement within the TAG can be called a breakthrough, as he said Zelensky. However, among his political opponents look at the situation differently, perceiving such a truce as a capitulation and treason. The protesters from the President’s office in Kiev is once again confirmed: a number of activists came in t-shirts with the inscription “resistance Movement to surrender.”

According to local media, the crowd sounded slogans “Zelensky out” and “Shame”. Also some activists from the party Poroshenko held posters with slogans: “No truce with the enemy”, “Zelensky, do not be afraid” and “Fight with Russia, not with the patriots.”

Adding fuel to the fire situation, also the fact that on the eve of the ceasefire in the Donbass, July 26, Zelensky had a phone conversation with Russian President Vladimir Putin — from the point of view of the opposition and radicals going on about the “aggressor”.

According to “Strenia” calling the Russian leader, the Ukrainian leader likely wanted to show that this is not an ordinary the truce in the Donbass, which was 29 pieces, but something more serious.

Besides, a special excitement causes one of the topics of conversation Zelensky and Putin to change the Constitution in terms of decentralization,

— emphasizes the publication. Probably talking about the inclusion of the special status of Donbass in the fundamental law of the state Kyiv for a long time refused to speak.

Why is it the President?

Taken together, all these factors are hitting the positions Zelensky in the eyes of the opposition from the “party of war” and the loyal radicals, but in fact shows the desire of Kiev to deal with the conflict in the Donbas peacefully through the Minsk agreement.

That is, the return to the “Minsk-2”, although in recent years tried to change or revise the existing agreement. Kiev has consistently insisted on holding the elections in the Donbass only after the return of control over Ukrainian border that directly contradicted previous agreements. And in General, the government and the President sounded controversial proposals to join the negotiations of third countries, including the United States, that was more like the rhetoric of Poroshenko.

Return to the Minsk agreements, meanwhile, can be traced only because of the dialogue Zelensky with Putin, because it raised the issue of changing the Constitution, and if it really was about the special status of Donbass — is a direct adherence to the agreements.

In such circumstances the question arises why Zelensky suddenly departed from the established practice of partial solutions — enter a truce and renunciation of the political part of Minsk agreements — which in fact was observed during the first years of his presidency, not counting the number of still unrealized promises for the breeding of the forces in new areas of the demarcation line.

Formally, the answers to this question may be a bit. The easiest the President of Ukraine decided to fulfill his campaign promise to end the conflict in the Donbass. However, given the consistent rejection of the implementation of the political part of Minsk agreements, this option doesn’t look too likely, although it is impossible to dismiss.

The second possible explanation is in part echoes the first, but only from a political point of view — the raising of the ratings on the eve of local elections, where sociology is not on the side of the party Zelensky. The election would be held on October 25 and a “breakthrough” in the Donbass can have a positive impact on the rating and the Zelensky, and “public Servants”.

If the performance of the presidential party until October not improve or continue to decline, most likely, the local elections will not allow “the Servant of the people” to repeat the success of the electoral campaign to the Parliament and occupy the majority of seats in the local legislature.

The third factor that could affect the change of the vector of Kiev Donbass, — the influence of Western partners. It is no secret that France and Germany have clearly require Ukraine to implement the Minsk agreements, and the continuation of the policy of care of them can lead to their final breakdown.

This ultimately can play not in favor of Ukraine wishing to get into the EU and NATO. And the braking of agreements at the fault of Kiev is unlikely to appeal to Western partners. If the situation is viewed in this way, Zelensky has sent a positive message to the allies at the armistice, and the willingness to discuss political agreements.

The actions of the Ukrainian leader also explained his desire to hold the next summit of the “Normandy four” — Russia, Ukraine, Germany, France, — the last meeting was held in December 2019 and concluded a number of agreements, in particular for the breeding of the forces in new areas of the demarcation line.

Kiev consistently require to convene a new meeting, but resistance to Moscow — in the Kremlin do not see the point in new negotiations, until the last agreement.

Probably call Putin together with large-scale truce may contribute to the convening of the “Normandy summit”, but here much will depend on further actions of Kyiv Minsk agreements and compliance with the ceasefire.

With the maintenance of the armistice it is already not too smooth. Despite the fact that it has been operational for less than a day ago (from 00.00 on July 27 Moscow time). Operation United forces (EP) of Ukraine said on recorded attacks by DNR in the first hour from the moment of entry into force of additional measures that the self-declared Republic called provocation.

In turn, the leadership of the LC supported the conclusions of the DNR command and also pointed to the provocative nature of the charges OOS. The official representative of the national police of the Republic of Yakov Osadchiy also noted that the representatives of the United forces try to convince Kiev that it would be inappropriate of decisions of the Minsk contact group.

“They also try to justify their fears associated with the threats of nationalists”, — said Osadchiy.

At the same time in the breakaway republics have expressed doubts about the long-term the declared cease-fire — just because of the provocative actions of environmental protection.

As said the Deputy of the DNR people’s Council Vladislav berdichevskiy, while hope, the ceasefire has held.

“Although we are already seeing movement on the part of Ukraine that allow us to doubt that this truce will be observed,” summarized Berdichevsky.