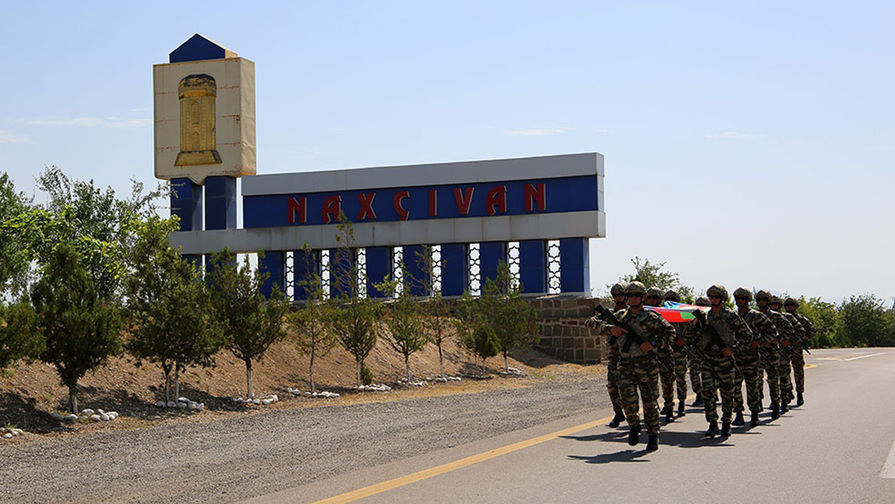 Turkey and Azerbaijan preparing to hold joint military exercises to be held including at the border with Armenia. In Yerevan sharply condemn the actions of Baku, believing them to be destructive. However, these military exercises largely contribute to the preservation of the region’s status quo.

The military of the two countries took part in the ceremony of laying flowers to the monument to former President Heydar Aliyev, who ruled the country from 1993 to 2003. That’s when it was laid the foundations of the strategic partnership between Ankara and Baku, expressed through the slogan “One nation — two States”.

Turkish and Azerbaijani soldiers announced a minute of silence to honour the memory of the late leader of Azerbaijan and martyrs, “who died for independence and territorial integrity” of the Transcaucasian Republic.

Military exercises of Azerbaijan and Turkey will last more than a week and will be including near the Armenian-Azerbaijani border, which has recently escalated conflict between two former Soviet republics.

Thus, exercises involving Ground forces will be held from 1 to 5 August in Baku and Nakhchivan. And maneuvers with the participation of military aviation will be held July 29 — August 10 in Baku, Nakhchivan, Ganja, Kurdamir and Yevlakh.

About the conduct of the exercise became known on July 27. In this situation, the Armenian MFA reacted almost instantly, stating that the exercise demonstrates the lack of Azerbaijan’s attitude on the world.

However, in Baku any connection to the current exercises with the aggravated conflict do not recognize.

“Joint military exercises of Azerbaijan and Turkey conducted in accordance with the Agreement on military cooperation between Azerbaijan and the Republic of Turkey and in accordance with the annual plan. These exercises serve to enhance coordination and exchange of best practices between the armed forces of the two countries and enhance regional peace and security”, — told RIA “news” the official representative the Ministry of foreign Affairs of Azerbaijan, Leyla Abdullayeva.

It is important to remember that

practically since the independence of Azerbaijan, Turkey played an active role in creating and increasing the combat capability of the Azerbaijani armed forces.

The basis of the bilateral relations in the military sphere was laid in August 1992, the agreement On “solidarity and cooperation”. A year later, Ankara has documented its intention to supply the Baku light equipment and ensure regular training of military specialists. Turkey has played a crucial role in the development of the program of modernization of the army of the Transcaucasian Republic.

The Baku-Ankara relations are developing not only in bilateral, but also on various international platforms. So, with the submission of Turkey in 1994 Azerbaijan joined the NATO program “Partnership for peace”.

For the past ten years Turkey and Azerbaijan are officially strategic partners. One of the priority directions of cooperation — the field of security. Allies guarantee each other mutual support in case one of the parties becomes subject to a “military attack or aggression.”

This document, signed in December 2010, establishes the principles for closer cooperation in defense and military-technical policy, and also provides for regular joint exercises between the two States.

Since then, the exercises of Azerbaijan and Turkey held almost every year. And every time Yerevan consistently criticizes this practice, regardless of the situation on the Armenian-Azerbaijani border.

However, for its part, Armenia also makes Azerbaijan a cause for concern. So, just a few days ago passed the joint Armenian-Russian military exercises of air defense.

In the current environment joint exercises conflicting republics with major regional players like Russia or Turkey are more deterrent than destructive. Close Armenian-Russian and Turkish-Azerbaijani relations in the military sphere, minimizing the possibility of large-scale military action in the Caucasus.