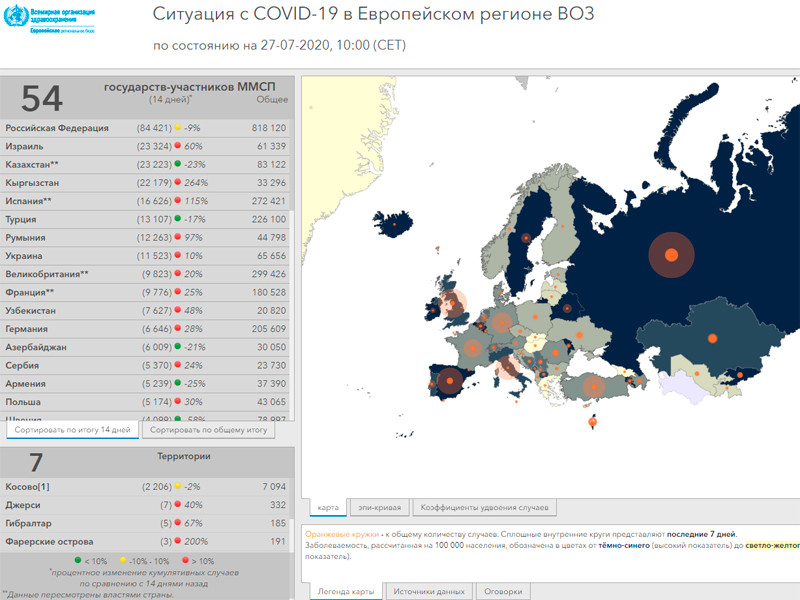 European countries are increasingly preparing for a second wave COVID-19 and are considering to return some limitations, according to The Guardian.

“Constant new outbreak of the disease make it increasingly real prospect of re-imposition of restrictive measures. And all this happens in a situation when millions of people went on vacation and travel Europe,” writes the newspaper.

For example, the government of Catalonia in Spain said that some measures of “lockdown” – a situation in which stops of public life could return to if in the future the outbreak of coronavirus, it will be impossible to take control within 10 days. Nearly 8 thousand new infections were registered in Catalonia over the last two weeks. Half of all cases identified during this period in Spain, reports “Interfax”.

“Now ahead of the 10 critical days of summer, and during this time we will see if we’re able to deal with the situation with solidarity, cooperation and collective efforts, – said the Chairman of the government of Catalonia Kim Torr. But the situation is critical, and if we fail, we have to go back (to the restrictions. – Approx. “Interfax”)”.

Torre also urged the youth to stop and go to home parties because it is because of this a growing number of cases of infection with coronavirus. Many of the outbreaks originated among the visitors of bars and clubs. However, other outbreaks have affected seasonal workers migrant workers.

Last week Spanish health authorities admitted that the country may already be experiencing a second wave of infection after the abolition of the strict three-month quarantine at the end of June.

The Catalan government ordered the closure of all night clubs for two weeks and imposed a midnight curfew in bars in Barcelona and Liege and around them. The authorities also encouraged the people of Barcelona to stay at home, but many ignored this advice and continued to walk to the beaches.

In Germany, representatives of health declared that is seriously concerned about the increase of cases of infection over the last couple of weeks. The head of the Ministry of health Jens span said that the country introduced mandatory testing for coronavirus for those who visited the territories, where there is unfavorable situation. “We must prevent a situation where returning travellers infect others, creating new chains of infection”, – said the Minister.

In France the Ministry of health calls for caution after a sharp rise in infections among young people. Young people urged not to forget to wear masks, wash hands often and keep your distance from other people.

In Greece are going to introduce the compulsory wearing of masks on the face, not only in supermarkets but also in other enclosed spaces where it is difficult to keep the distance. On such measures the government want to go, because the number of infections in the country continues to grow. Government spokesman Stelios Petsas noted that the wearing of masks in churches is mandatory – it is only a matter of time. Now in Greece, the masks must also be worn in public transport, for violation faces a fine of 150 euros.

In Belgium also do not exclude that the country can enter the second “full lockdown”. For the week the average daily quantity of infected with a coronavirus grew up by 71% – from 163 to 279. And in Antwerp the growth of infections has reached 500%. In the midst of the epidemic were recorded in April, more than 1,000 cases a day.

The national security Council Belgium, urgently convened Monday for a few days earlier than planned, after a six-hour debate, decided to partially tighten used measures against pandemic coronavirus. Prime Minister Sophie Wilmes stated that the epidemiological data are alarming, and the country’s leadership is trying to keep the situation under control. “The goal is clear: to avoid re-introduction of a universal regime of isolation and danger in the beginning of the new academic year in September,” – said Wilmes.

According to her, school may not open with the beginning of the school year. She also “strongly encouraged” to return the employees “udalenka”. Wednesday in Belgium, and limit the number of social contacts each family can only contact five other people. In addition, shopping is possible only by one, not in groups, and stay in the trade hall not more than 30 minutes.

The trip can be made only by groups of up to 10 people. An exception is made only for children 12 years of age.