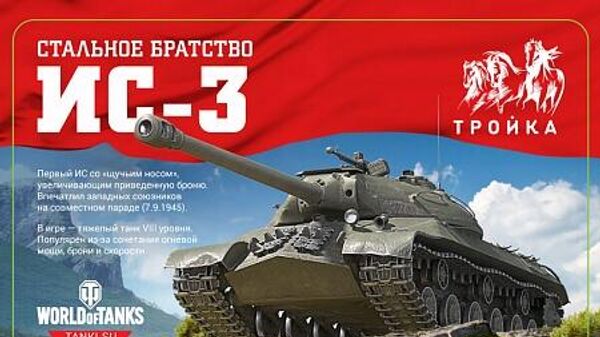 The card with the image of Soviet tanks appeared on racks “Live chat” and souvenir shops, metro, the press service of the Moscow subway on Wednesday.

“The card “Troika” with the image of Soviet tanks appeared at the information counters to “Live chat”, and souvenir shops underground. Previously the cards could be purchased only in the online store of the metro at shop.mosmetro.ru. At the moment, for buyers available 10 variants of the card with images of Soviet tanks and a brief historical note about each of them. The circulation of each card was 10 thousand copies. Depicts the “Troika” of the model can also be seen in the game World of Tanks”, – is spoken in the message.

It is noted that at metro stations, information desks “Live chat”, and souvenir shops metro placed 300 posters dedicated to the theme of “Threes”.

“In the gift shops of the Moscow metro you can purchase cards, key fobs and rings “Troika”, as well as hoodies, t-shirts, magnets, statues, medals, badges, keychains, mugs, toys, stationery and other Souvenirs. Most of the items have practical value: they can not just put on the shelf and use every day,” – stated in the message.

Souvenir showcase appeared first on racks “Live chat” Moscow metro in December 2016, and in 2017, the flagship shops of Souvenirs of the underground was opened at the metro stations “Mayakovskaya” and “pipe”. In may 2020, the Moscow metro has launched online shop.