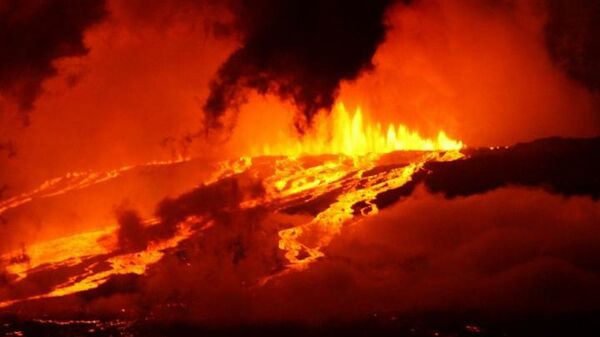 basaltic lava, at some point can erupt an explosive eruption. This conclusion, according to scientists, can be extended to the rest of a quiet volcano located in other parts of the world. The study is published in the journal Nature Communications.

It is known that some volcanoes in Iceland, Hawaii, and the Galapagos Islands — a thousand years produce fluid basaltic lava that slowly flows through the same “channels” forming long rivers of fire. Such volcanoes scientists call calm. Others, such as Vesuvius in Italy, or St Helens in Washington state, USA, rarely erupt, but these events are accompanied by enormous explosions and catastrophic destruction.

Although liquid basaltic lava of quiet volcanoes can potentially cause damage to nearby homes, she usually moves slowly and does not pose a threat to human life. With the threat of new eruptions, the local authorities take the necessary security measures, which, however, do not envisage a scenario of catastrophic explosions.

Scientists from the USA, the UK and Ecuador under the leadership of Dr. Michael Drain (Michael Stock) of the School of natural Sciences Trinity College in Dublin examined two of the volcano on the Galapagos, wolf and Fernandina, which always erupted only composite homogeneous basalt flows.

Deciphering the structure of microscopic crystals in the lava, the authors established the chemical and physical characteristics of magmas under volcanoes. It was found that the depth of magma is extremely diverse, including some similar to those erupted by mount St. Helens.

“It was really unexpected — presented in a press release, Trinity College, the doctor’s words Flow. — From the study, we wanted to know why these volcanoes are so boring, and what process causes the composition of the lavas remain constant for long periods of time. Instead, we found that they are not boring — they just hide their magmatic secrets under the earth.”

Researchers believe that the composition of basaltic lavas remains constant until there is a continuous inflow of new portions of magma — for example, when the volcano is over a “hot spot” — a jet of hot magma rising to the surface from the depths of the Earth. In this case, the hot melt in the tank all the time is mixed and its composition is averaged.

If the root system is kept closed, it generates magma, richer in volatile substances. Rising to the surface, they can cause explosions. So calm the volcanoes, if they located pockets with chemically heterogeneous magma may at some point start to show explosive activity.

“This discovery changes the game and allows you to link contradictory combination of quiet and explosive eruptions at several volcanoes of the Galapagos Islands in the past, says another study author Benjamin Bernard (Benjamin Bernard) from the Institute of Geophysics of Ecuador. — This gives us the opportunity to better understand the behavior of these volcanoes, which is essential for their monitoring and hazard assessment”.

Although there is no indication that the volcanoes of the Galapagos Islands in the near future undergo changes in style of eruption, the results of the study explain why some volcanoes suddenly change their behavior.