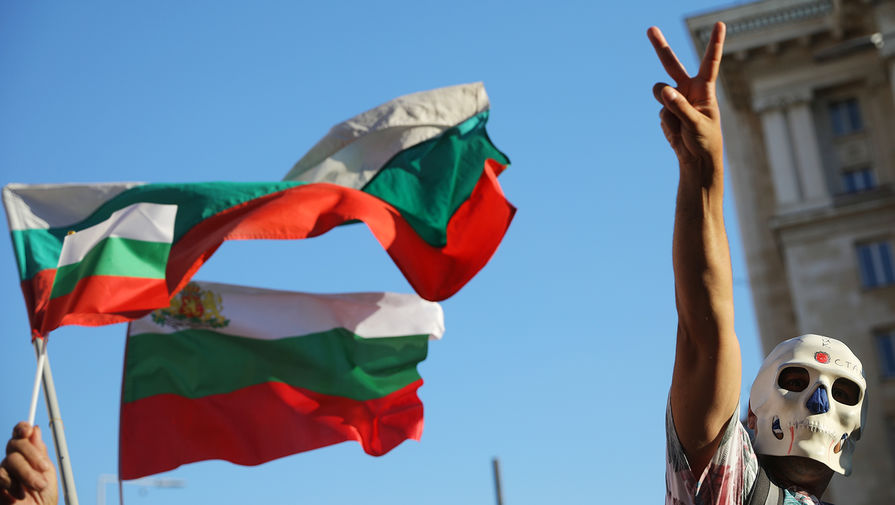 In Bulgaria for the 22nd day of anti-government protests. Concessions, which went to the Prime Minister, dismissing five Ministers, people in the country are not satisfied. Protest organizers argue that the situation is not stabiliziruemost as long as the government and the attorney General will not resign. The opposition Bulgarian socialist party and the President of the Republic of rumen Radev strongly heated protests.

That’s already the 22nd consecutive day, residents are demanding the resignation of Prime Minister Boyko Borisov, as well as the chief Prosecutor of the Republic of Ivan Geshev. In the residence of the Prime Minister, the protesters throw eggs and imitation banknotes are in denominations of €500.

Thus participants of the action draw attention to the emergence of the Internet pictures of the sleeping Prime Minister, near which on the table lay the gun, bundles of banknotes of €500 and gold bullion.

However this incident was the initial reason for the protests. On the streets of their cities, the Bulgarians came after the publication of the video of the former Minister of justice and leader of opposition party “Yes, Bulgaria,” Hristo Ivanov, in which he and his supporters attempted to visit the beaches, which is a mansion of a supporter Borisov, the oligarch and the former leader of the party “Movement for rights and freedoms” of Ahmed Dogan.

Ivanov argued that the construction of the Villa on the coast was illegal, as was the transfer of the beach property in the private Dogan. Aggravated the situation, the behavior of the guards oligarchs that let finding available on site, and then the police arrived, demanded the supporters of Ivanov’s documents. Against the background of allegations that the beach on which they arrived, must be open to all, the behavior of the guards and police seemed proof that the property of the businessman, the government illegally transferred the land to state ownership.

The next day, the President of Bulgaria, rumen Radev said that the guard who let finding Mann on the beach — the officers of national defense, responsible for protecting the President, Prime Minister and other dignitaries, and the Dogan does not have the right to use their services.

July 9, in the President’s administration, a search was conducted. On the same day, the interrogation was caused by the President’s adviser on security issues Milush Elijah and the Commissioner against corruption Plamen Uzunov.

The protesters, with the submission of the President took these steps as a revenge to the Prime Minister for criticism because of the transfer of the beach property in Dogana — in the country began the biggest with the 2013 protests.

The demonstrators daily chanting “Mafia” and demanded the resignation of the entire Cabinet. 21 July in the Bulgarian National Assembly passed a vote of no confidence to the government, a proposal previously submitted by the opposition Bulgarian socialist party (BSP). However, the necessary number of votes has not picked up.

However, the Prime Minister was limited to only personnel changes, new faces or supporters of the opposition in government did not appear. Protesters such concessions were not satisfied. They intend to continue demonstrating until, until, in resignation will not leave the government in full force, and Prosecutor General Ivan geshev.

Protests strongly heats the President, who enjoys the support of the BPS and has long been leading the confrontation with the Prime Minister.

“The protest calls for the resignation of the entire government and the chief Prosecutor. The government, however, again does not hear citizens and tells about some repairs of the Cabinet. Hopes that the summer holidays and fatigue will make you less decisive. However, if they come here, you’ll see the determination in your eyes. The resignation of the entire government and the chief Prosecutor is the first and mandatory steps for fair elections, the return of Bulgaria on the democratic path, an irreversible dismantling of a flawed model of management that has chained us to the European bottom, to restart the political process and modernization of the country. We need a new Parliament, because the current majority does not hear the demands of the people”, — said the politician, speaking at one of the protests.

Radev also stressed that the country needs constitutional reform and changes that will strengthen civil rights, eliminate corruption, to provide conditions for work and income, who will return home from citizens working abroad.

“Never before the Bulgarians were not so United in the determination to recapture the state from the mafia”, — quotes his words TASS.

Anyway, the situation is unstable, and the Bulgarian socialist party has a chance to take power. The other force that could take advantage of the situation in the Republic, not now. The party of “Yes, Bulgaria” not enough resources to single-handedly turn the situation completely to normal.

Meanwhile, in the case that BSP is really able to come to power, then Russia will be able to strengthen its ties with Bulgaria.

“The core of the BPS electorate is nostalgic for the days of the people’s democracy, for friendship with the Soviet Union, the older generation of retirees who love the Soviet Union and “Mike Rousseau” [translated from Bulgarian — mother Russia]”, — noted in conversation with “Газетой.Ru” senior researcher, Institute of Slavic studies, RAS Nikita Gusev.

Russia has anything to worry about when it comes to Bulgaria. In stale condition of the tender for selection of investor in construction of NPP “Belene”, one of the contenders for the participation in which is the Russian “Rosatom”. 12 years ago Russian Atomstroyexport won the tender for the construction of two blocks of the station and signed a contract with the National energy company of Bulgaria.

In 2009, after coming to power the government of Boyko Borisov, the project became more delayed and as a result, 2012 was frozen. By “Rosatom”, a lawsuit was filed in the court of arbitration of the International chamber of Commerce in Paris against the NEC by 58 million euros, later increased to $ 1 billion. In the end the Tribunal awarded the NEC to pay the Russian side €601,6 million This debt Bulgaria has paid in 2016.

Sophia soon returned to this issue and announced a contest. The Bulgarian government has previously said that without the participation of Russia NPP “Belene” can not be implemented, since Rosatom is a designer and manufacturer of reactor equipment and prepared the project.

At the same time as Bulgaria started to prepare the tender, negotiations were conducted and the construction of “Turkish stream.” In January, Sofia began to receive gas. However, on the subject of Russia, not many expected due to a negative experience. In 2014, because of the position of the Bulgarian side and the requirements of the European Commission had to abandon gas pipeline project “South stream”.

However, relations between Moscow and Sofia, and now can be called rather positive, especially against the background of relations with other countries of the European Union.

However, one way or another, the position of the BSP is considered more Pro-Russian. However, to expect much from them also it is not necessary — Bulgaria, in the first place, a member of the EU and NATO, and the socialist party has changed.

“At the level of cultural, diplomatic possible warming. However, we must not forget that the current BSP is far from what it was in the days of Stanishev [Sergey Stanishev, former Prime Minister of Bulgaria and former Chairman of the BSP], who was a graduate of the history Department of Moscow state University, or Parvanov [Georgi Parvanov, a former President of the Republic and former Chairman of the BSP], long friendly with Russia. This is the next generation. Korneliya Ninova, [Chairman of the BSP] is not so connected with Russia and the Soviet Union, she has such a flair of youth, as the previous leaders of the party” — sums up the expert.