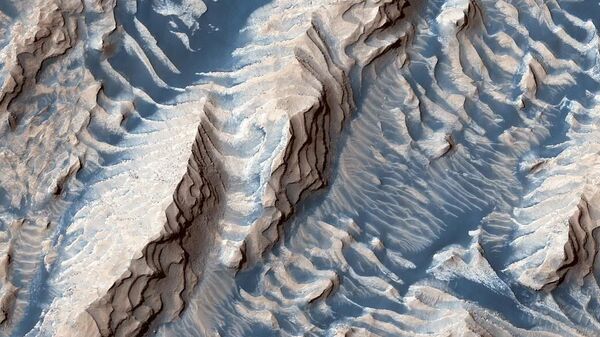 Scientists studying Mars, was the first to prove that the wave structure on the surface of the planet are not immune fingerprints of rocks and moving sand “megarave”, similar to that found in arid regions of the Earth. The study is published in the journal of Geophysical Research: Planets.

In the pictures the surface of Mars in many places visible wind-blown wave structure of Aeolian sandy “maghrabi”. Waves of sand located at a distance of from one to 35 meters from each other — on average about five meters. The size of these structures by about two orders of magnitude less than the surrounding sand dunes. At the base of the waves, according to scientists, is fine-grained fraction of sand — dust, and on top of the ridges — the larger the grains.

The question of how did Aeolian “maghrabi” on the surface of Mars or not, for a long time does not give rest to scientists. Until recently it was believed that the sand density is too high, and the wind at the surface of the red planet is too weak to Sands moved, and wave ripples sand deposits, a frozen witness to those distant times, when the atmosphere was much more active and winds are stronger.

A new study proves that the Sands are moving now, albeit very slowly. Comparing images taken between 2007 and 2016, a high resolution camera HiRISE (High Resolution Imaging Experiment) aboard the automatic interplanetary station Mars Reconnaissance Orbiter, scientists have discovered that the Sands shift with a speed of several centimeters to 12 centimeters per year.

“It is not surprising that at such small speeds of movement of these moving Sands was considered static, and previous studies carried out at shorter time intervals only two or three Martian years, could not detect such a small migration — presented in a press release, the words of the first author Simone Silvestro (Silvestro Simone), planetary scientists from the astronomical Observatory of INAF at Capodimonte in Italy. — Due to the fact that we now have observations over 10 years, we’ve been able to see movement.”

Maximum speed of 19 inches per year — was recorded on two sites — in the area of plains in Nili Fosse in the McLaughlin crater. The authors attributed this to the fact that these two areas developed high sand dunes, from which surface weak winds are easier to blow off fine dust-like sand, forming a moving “maghrabi”.

The basis of the displacement, according to the authors, lies in the geological process of saltatio intermittent movement of sand particles — a kind of chain reaction, when the movable particles collide with static, embossing and involving them in the further process of movement. The result of the same process in the winter wave formed ripples on the surface of the snow cover.

Researchers believe that the fact that it was possible to see and measure such a slow Aeolian processes on the surface, shows a considerable accumulation of knowledge about the atmospheric conditions of Mars.

Also, now to explain the occurrence of Aeolian wave structures do not bring past periods of strong winds. The results show that the formation of sand “maghrabi” enough weak movements of the modern atmosphere of the red planet.

And it’s not very good news for future Mars missions — shifting Sands can become an unexpected obstacle for manned stations and solar panels, the authors of the study.