Followed by the United Arab Emirates and China, the United States has sent to Mars, its spacecraft. Thursday, July 30, booster Atlas V with the Rover’s “Perseverance” was launched from the spaceport at Cape Canaveral in Florida at 7:50 am East coast time USA (14:50 GMT). The main goal of the American mission – the search for traces of life on the red planet. 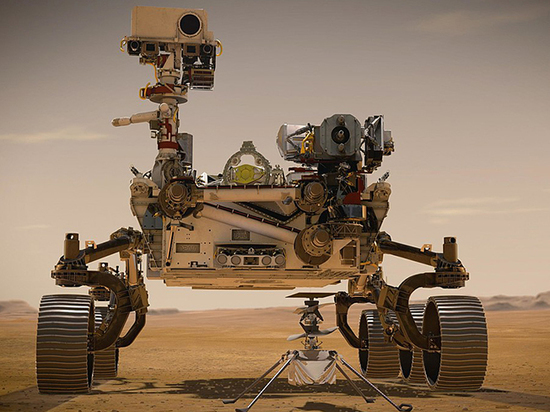 According to representatives of NASA, this mission and its expected subsequent findings can lay the Foundation for the possible study of the red planet by man.

The Rover “Perseverance” (“Perseverance”) are equipped with seven special tools, including radar to study the Geology of the crater, instruments for studies of the chemical composition and Mineralogy of the rocky surroundings, the UV laser to display organic compounds and sensors to determine Martian weather (temperature, wind speed and air humidity).

The task sent to Mars apparatus, in particular, includes a survey of the bottom of an ancient dry lake deep in the Martian crater, looking for signs of ancient life.

As the scientists explain, in the 1970s, the program “Viking” tried unsuccessfully to find living organisms on Mars, but now the approach NASA is to study ancient objects, since, according to the early history of the planet, which includes science, Red planet was the most suitable for life in its first billion years. And “Perseverance” will search for particles of organic matter.

One of the objectives of the current Mars mission is to collect to send to Earth samples of rocks and soil for a more detailed study. According to plans NASA, these samples will be taken to our planet no earlier than 2031.

The Rover is also equipped with 23 cameras with high resolution and color reproduction for navigation and technical operations and two microphone to record Martian sounds.

Moreover, on the “Perseverance” is an experimental system that will test whether it is possible to use carbon dioxide from the atmosphere of the red planet to produce oxygen. If this technology is successfully operational, scientists will be able to use it when developing life support systems for human habitation on Mars.

The six-wheeled Rover also has on its Board a small helicopter, called “Ingenuity” (“Ingenuity”). It is designed to perform experimental test flights in the rarefied atmosphere of Mars.

“For the first time in history, we will fly by helicopter to another planet, – said Monday, July 27, at a press briefing, NASA administrator Jim Breidenstein, adding that future missions can use these helicopters as aerial scouts.

On the Mars mission the us space Agency had some influence pandemic COVID-19. In normal times crowds of people gathered on the beaches near Cape Canaveral to witness the launch of NASA. However, due to the growth of new cases of coronavirus, the Agency has urged fans of the universe to stay home and monitor what is happening online.

Deputy head of mission NASA Matt Wallace said the Rover has already justified its name – “Persistence”. After all, despite all the trials caused by the spread of the virus, the engineers still managed to prepare the spacecraft for the upcoming launch.

“Nothing could prepare us for what we had to face in the middle of March, when the pandemic is not only our team, but also communities across the country and the world, said Wallace. – At the time we were at the final stage of Assembly.”

In addition, as a sign of respect and gratitude to all health workers who today are waging a fierce struggle against COVID-19, mission, engineers attached the Rover’s aluminum special plate: it shows the Earth and the rod of Asclepius – symbol of medicine.

“The image symbolizes the challenge faced by the whole world, when the pandemic” – said Matt Wallace.

Aerospace Agency of the USA it is no coincidence that sent their missions to the Red planet this summer. This was done because of the emergence of the so-called “launch window”, a period of time when Earth and Mars are at a close distance to each other, making space travel much shorter.

If running all the same postponed due to the spread of a dangerous virus or for some other reasons, the Agency would have to wait a few years before the emergence of the next “window”.

The unit will spend nearly 7 months in space before landing on the surface of Mars in February 2021. It is expected that the Rover will land in the crater of Jezero, a place that was once the Delta of an ancient Martian river.

Recall that the NASA Rover has become the third spacecraft sent to the red planet this month. Chinese mission “Tangwani-1” was launched on 23 July, and before July 20 – the United Arab Emirates successfully launched the Orbiter, “Hope”, marking the first interplanetary mission of the Arab world.