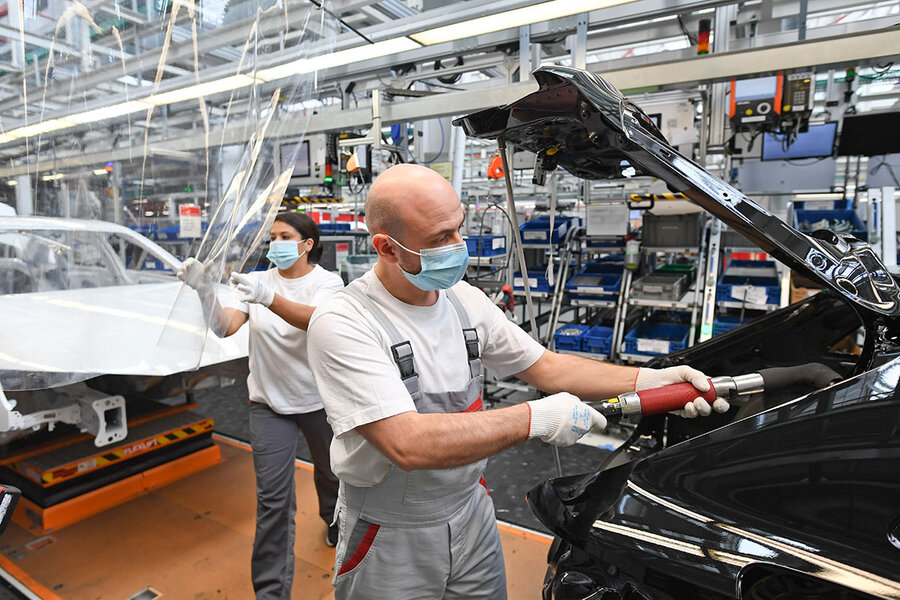 Annette Brinkman was only 4 when she took her first trip out of Germany.

That trip to the sun-soaked island of Mallorca, Spain, with her parents inspired a love for travel, and by her teens she was collecting destination brochures 50 at a time. By high school, she knew she wanted a career in tourism.

Today, the coronavirus pandemic has decimated revenues at the company that’s employed her for four decades as a travel booking agent and office manager.

Yet, even as the travel industry has been gutted, Ms. Brinkman collects more than half of her original salary as she cooks, gardens, takes a breather, and waits for the signal to return to work at her company’s local office in Dortmund, a medium-sized city in western Germany. Thanks to a German government program known as Kurzarbeit, which taps government coffers to help employers pay worker salaries, the company hasn’t let go a single employee.

“This is the first time I’ve not been working in 40 years,” says Ms. Brinkman. “It’s a shock. But without Kurzarbeit, we would all be unemployed right now. That would be 100 times worse.”

As the global pandemic prompts an uncertain economic future, employers in Germany have tapped an important patch in the country’s social safety net to help avoid mass layoffs and stay afloat. Translated as “short work,” Kurzarbeit allows companies to whittle down employees’ working hours to as little as zero if needed, and have the government chip in to restore salaries to a certain level.

“We’re proud in Germany we have a good social security system,” says Johannes Jakob, head of labor market policy at DGB, Germany’s leading trade union. “It may be a little more expensive, but during the 2008-09 crisis skilled workers could stay in place, and when the economy improved they were able to start again the next day. It helps us get out of the crisis as quickly as possible.”

Under Kurzarbeit, employers can reduce workers’ hours to any fraction of a normal workweek and pay accordingly. Germany’s Federal Employment Agency, flush from 10 years of building up reserves, then plugs the remaining salary gap up to a certain percentage of an individual’s usual salary.

Two years from retirement, Ms. Brinkman volunteered to work zero hours, with the thought that younger colleagues might need hours that would have been allocated to her. Without working, she’s still able to collect 60% of her pay, but she’s cut out frills including once-weekly dinners and thermal baths.

Kurzarbeit does keep most people working, according to Mr. Jakob. During the 2009 financial crisis, about 3 of 4 employees continued to work even in Kurzarbeit. And, “short work” costs governments roughly the same as putting people on unemployment, Mr. Jakob notes, yet it reaps much greater rewards. Employers can get help to keep workers on payrolls, while those workers can feel more secure in their financial and career outlooks.

The U.S. situation, where nearly 40 million filed for unemployment during the coronavirus shutdown, would be a catastrophe in Germany, says Mr. Jakob. “The equivalent in Germany would be roughly 14 million unemployed without Kurzarbeit. [With the program] we actually only have 500,000 unemployed.”

Enzo Weber, a macroeconomist with the University of Regensburg, points out that retaining workers is much more important in a market like Germany’s. In short, companies are slow to hire. “In Germany if we had 30 million additional unemployed, it would take us 20 years or so to get back to the pre-crisis level,” says Mr. Weber. “The U.S. market sheds quickly, but also brings back workers much more quickly. We are slower than the U.S. in both directions.”

A drag on reform?

The program also requires the right combination of factors to prompt employers to apply, such as an “exogenous” market shock that appears temporary, and a skilled-worker shortage that makes it difficult to fill positions.

So far, those factors have neatly lined up. A coronavirus is an external shock, and Germany suffers from a shortage of qualified labor. “This makes firms ready to keep people on board, because they might never get them back,” says Mr. Weber. “Kurzarbeit saves them the ‘match capital’ so they can restart quickly when they need.”

Yet, Kurzarbeit can also slow progress should industries need restructuring, “because it keeps everything and everyone where it is,” says Mr. Weber.

Indeed, the pandemic has prompted changes in supply chains and industries such as mobile, transportation, and digitization. “Jobs after the recession aren’t necessarily going to be the same as before the recession,” says Mr. Weber. That means retraining and investment in skills is important to keep the workforce agile and adaptable, he says.

Uncertainty in the future

Ms. Brinkman is aware that the travel industry could be radically changed once the economy gets back to normal. “Longtime clients will always be with us,” says Ms. Brinkman, “but will others book online? Or will they say the travel agencies really helped us through this time?”

In short, she wonders if all the 24 colleagues in her local office will be needed in the future.

For Robert Helbig, four weeks on Kurzarbeit was a blessing, as he’d just welcomed a newborn son. A worker at a car factory, he stayed home as the plant was shuttered, and the Federal Employment Agency covered 60% of his salary while his employer topped up the rest. “Enjoying that time with the family is amazing,” he says.

Mr. Helbig is back at work now as Germany has reopened for business. He’s thankful that he’s survived the crisis financially intact.

“I think a lot of people don’t really know how good Kurzarbeit is,” says Mr. Helbig. “For some people it’s hard to survive on 60% pay. But we shouldn’t be complaining in Germany. Especially if you look at what’s happening in America.”