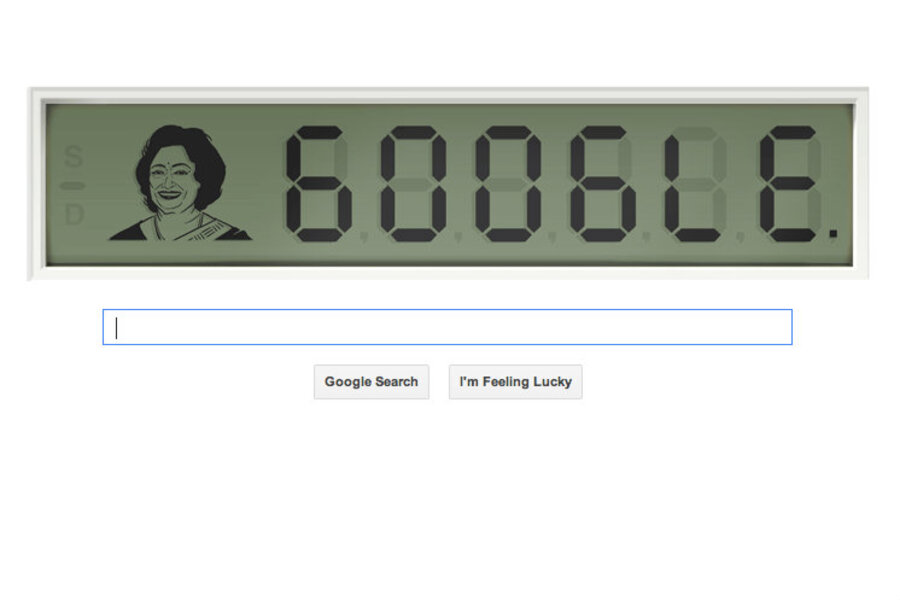 Imagine being faced with the number 61,629,875 and being asked to calculate its cubed root. Without a calculator.

That is one of the feats that earned Shakuntala Devi the nickname “Human Computer” and a Google Doodle created in her honor Monday.

But she is far from the only mathematical prodigy that has been graced with the talent of super-human computation ability throughout history. Human computers, or human calculators, are people who are able to perform complicated mathematical calculations quickly, in their head.

Some are simple prodigies, able to do the problems from a young age, while others have trained their brains for years to quickly process complex computations. Here are a few other human calculators over the years and their mind-boggling mathematical feats.

Scott Flansburg (born 1963): Mr. Flansburg first realized his mathematical ability when he could solve his math class’s equations without writing them down and could mentally keep track of his family’s grocery bill as they picked out items throughout the store. His ability led him to being named “Fastest Human Calculator” by the Guinness Book of World Records in 2001 and 2003 when he broke the record for adding the same number to itself more times in 15 seconds than someone could do with a calculator. Now Flansburg has channeled his natural ability into inspiring a love of math in others: he developed a book of math problems for kids and serves as the host and ambassador for World Maths Day.

Willem Klein (born 1912, died 1986): Before there were electronic calculators, there was Willem “Wim” Klein. The Dutch mathematical whiz toured the world under the stage names Pascal and Willy Wortel, wowing audiences with his ability to calculate the 73rd root of a 500-digit number in two minutes and 43 seconds (which earned him a world record), among other feats. But his talents were worth more than an afternoon of entertainment. His computing genius was soon noticed by CERN, a European organization for physics research, where he worked for 18 years in the Theory Division, helping scientists crack tough calculations in the days before computers.

Mike Byster (born 1959): Math teacher Mike Byster starts his classes by saying he has one of the fastest mathematical minds in the world. He can solve complex math problems at the speed most people can add 2+2. Mr. Byster, a stock broker turned math teacher, has used his method of memorization and mental prowess to create Brainetics, a program for kids that helps the math-shy see systems and patterns in problems in order to solve problems faster. He hopes this will inspire effectiveness and confidence in anyone who uses his system.

Zerah Colburn (born 1804, died 1839): When Zerah Colburn was born in Cabot, Vt., math prodigies were not understood in the way they are today. Though at age six he was reciting multiplication tables that he had not yet learned, many doubted his ability. But his father, Abia Colburn was convinced of his genius and took him on the road in hopes of making a bit of money as well as finding a place to develop his son’s ability. From Montpelier to London to Paris, the two Colburns traveled showing off Zerah’s mathematical ability and attempted to find suitable education for a pre-teen prodigy. The duo had little luck, and Zerah eventually returned to Vermont after his father died in 1824. He spent the rest of his life in the Northeast, and after stints as a Methodist minister, writer, and language professor at Norwich University, he died in 1839, with only his memoir “A Memoir of Zerah Colburn: Written By Himself” documenting his mathematical feats.

Today, human computers are tested at the annual Mental Calculation World Cup. The current reigning champion is 22-year-old Naofumi Ogasawara, who beat out other competitors in various mathematical feats. His world record-breaking feat this round of competition? In the addition category, contestants are presented with 10 sums of 10 10-digit numbers each. Mr. Ogasawara completed the task in just over three minutes.

The Ministry will allow to use old parts when repairing cars