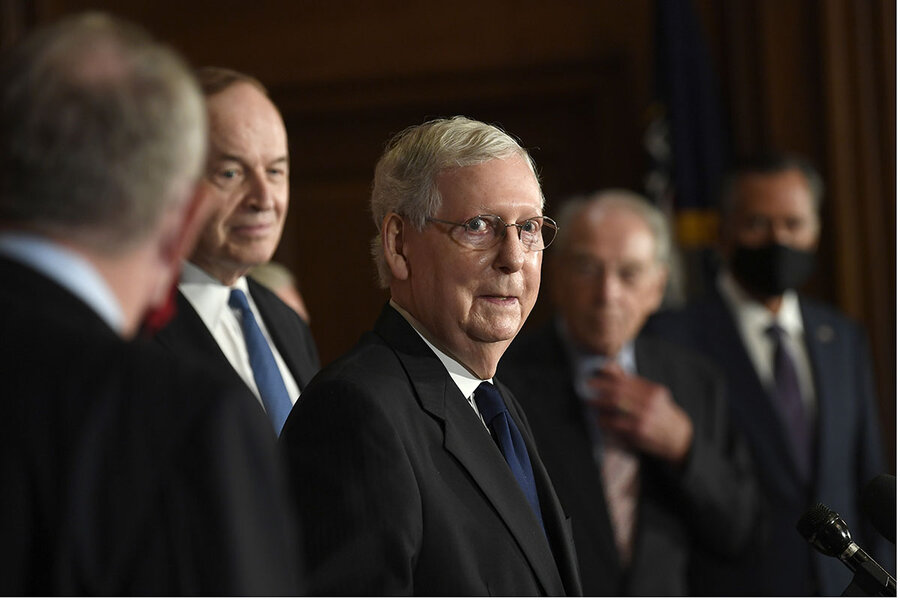 As the economy approaches a daunting cliff of expiring coronavirus relief programs, House Democrats have already responded by passing an economic rescue bill that’s even bigger than the first.

Republicans are exhibiting a very different mindset – espousing the view that, despite the urgency of the moment, it’s better not to rush in spending such large sums of taxpayer money.

Senate Majority Leader Mitch McConnell argued for a “pause” back in May, and on Monday he defended that cautious approach, even as his party proposed a roughly $1 trillion plan to offer new aid to struggling Americans and an ailing economy. House Democrats, with their HEROES Act, would spend another $3 trillion. On Tuesday, they painted GOP senators as harming the economy with their slowness to act.

The gap is rooted heavily in ideology. Republicans have traditionally been a party of economic individualism, not big government. Some GOP senators would rather pass no bill than what they view as a profligate one.

In the end, however, pragmatism and politics are likely to bring the two sides toward a compromise as they negotiate a relief package that, judging by economic data, is acutely needed. Whether one views Senate Republicans as a useful check against liberal excess or a source of needless delay and parsimony, conservative lawmakers appear poised to play a pivotal role in the next policy steps at a critical time for the economy.

“The strategy of the Democrats is ‘bigger is better,’ and that we need to aim a Keynesian bazooka at the economy in order to get it going,” says Brian Riedl, an economic policy expert at the conservative Manhattan Institute. “By contrast, Republicans are taking the approach that we need targeted social insurance to keep businesses and families afloat … but that we want to do this without spending anything beyond what is necessary.”

The Republican plan still includes everything from new “economic impact” checks for households to money for school systems and for coronavirus testing and vaccines. Among the sources of disagreement with Democrats: Republicans want to be less generous in providing extra assistance for unemployed people, and more generous toward businesses by shielding them from potential lawsuits over the COVID-19 disease.

“This is not free money,” said GOP Sen. Rick Scott of Florida, last Thursday. “In the end, someone is going to pay taxes for this.”

Whatever Congress does, it’s important to make sure the investment of taxpayer dollars gets “a return,” Senator Scott said, in an interview outside the Senate chamber. For him, shielding businesses from liability is key to aiding an economic recovery, as are funds for coronavirus testing.

“Congress should absolutely spend what it takes”

Even for disciples of John Maynard Keynes – the British economist who pioneered the idea that government spending could lift economies out of recession – it’s clear that pouring in federal dollars is at best a partial fix for the economy’s current troubles. Without progress toward getting the coronavirus pandemic under control, restoring normal activity for consumers and businesses is unrealistic.

Yet that doesn’t mean the next round of federal relief isn’t critical.

Already about 30 million Americans are relying on unemployment benefits, which are poised to diminish after this week with the expiration of a special boost enacted by Congress in March. Similarly, safeguards against tenant evictions during the pandemic emergency have expired recently at the federal level and in some states.

Emergency loans to businesses – also dating from the $2.2 trillion CARES Act in March – are fading as a prop-up to help pandemic-affected employers. By some recent indicators, businesses are increasingly feeling unable to survive the long wait for a rebound, and job losses are shifting from temporary to permanent.

Mr. Riedl, while generally sharing the conservative instinct against big spending, says the riskiest move right now would be for government to give too little help, not too much. And time is of the essence.

“We’re already seeing reports of restaurants closing permanently in large numbers,” he says. “The cost of the [Paycheck Protection Program loans] or related business assistance programs is significantly cheaper than the cost of millions of businesses going under, keeping the unemployment rate high, and prolonging the downturn several years. Congress should absolutely spend what it takes to keep businesses afloat.”

Negotiations with Democrats over a final bill that both the House and Senate can approve (and the president sign) may last into early August. But in the end, Republicans who control the Senate have a powerful motive to strike a deal.

Failing to act would be a big election-year liability, at a time when the economy is operating far below its capacity and the pandemic is not contained.

“The longer Congress negotiates what our next [relief bill] will look like, the longer American families are suffering, the longer American business is hurting, and the longer we are delaying our economic vibrancy in this country,” says C. LeRoy Cavazos-Reyna, vice president of government affairs at the U.S. Hispanic Chamber of Commerce.

That reality is pushing the two sides toward common ground. Both sides want to help schools operate amid the budget squeeze, and to address the pandemic itself.

Republican Sen. Roy Blunt of Missouri said Monday his party is ready to spend billions to support production of vaccines – even if some of that money is wasted on vaccines that prove ineffective. The idea: having a successful vaccine ready for public use in January rather than next May “is worth billions of dollars” more to the economy.

And both sides know that businesses need additional help. Some senators in both parties support not only a new round of loans for hard-hit small businesses, but also making additional investment money available to firms in distressed neighborhoods across the country.

Speaking in a corrective tone toward some members of his own party, GOP Sen. Marco Rubio of Florida said Monday that business loans are “not a bailout. This is about viable companies who are struggling because of necessary government regulations.”

Partisan rifts to be overcome

Yet alongside likely points of bipartisan agreement are partisan rifts to be overcome.

How much aid do states and cities need? Should the bill include Democratic priorities like stepped-up nutrition assistance, more relief from eviction, and hazard pay for essential workers during the pandemic? Where to draw a line of compromise on the overall size of the package?

The most publicized divide – and one that puts the parties’ ideological differences in sharp relief – is over unemployment benefits.

Republicans are resisting an extension of the $600-per-week CARES Act supplement to the regular unemployment insurance that states offer. They argue that, with many people getting more income while jobless than they did working, it’s a disincentive to return to jobs.

Their proposal: Replace 70% of income for the unemployed, and offer a new hiring bonus for people who go back to work. Since some states are unable, administratively, to implement relief as a percentage of lost income, the GOP plan would temporarily offer a flat federal supplement again, but at $200 per week rather than $600.

To supporters, this proposal still offers bolstered aid to the unemployed during a time of emergency, while also hewing to the conservative ideal of promoting individual responsibility.

“It just wouldn’t be fair to use taxpayer dollars to pay more people to sit home,” Treasury Secretary Steven Mnuchin said in a TV appearance Sunday.

But critics of the proposal say generosity toward the jobless is warranted on both economic grounds and out of justice toward individuals.

“There’s a sort of basic question of fairness here,” says Ernie Tedeschi, a former U.S. Treasury economist now at the strategic advisory firm Evercore ISI. “These people are not able to work and not able to make money because we had, in many cases, shut down their places of business to control a pandemic. So it just seems fair to me that those families should be made entirely whole.”

As for the economy, he sees little evidence that generous benefits are harming the labor market. Job seekers far outnumber available jobs, and “if we withdraw it too early, we really run the risk of a pretty serious self-inflicted wound on the U.S. recovery,” by undercutting consumer spending, Mr. Tedeschi says.

Although the Hispanic Chamber hasn’t taken a stand in the debate over jobless benefits, Mr. Cavazos-Reyna notes that the stakes are particularly high for Latino and Black Americans.

“Latinos and African Americans are some of the hardest hit populations in this country health-wise when you look at the pandemic, and hitting them again economically would just be disastrous,” he says.

Susan Dawson, board chair-elect at the National Association of Women Business Owners, says the CARES Act in general failed to bring a fair share of relief to minority populations and women.

In her view, a top economic priority – once safety allows – is reopening schools, not just for the sake of kids but also for parents who are straddling roles as remote workers and caregivers. “I suddenly went from not just a full-time working business owner but also having to suddenly learn how to be a teacher to some degree,” she says.

Like Mr. Cavazos-Reyna, Ms. Dawson has been hearing from business owners about their need for loans and other relief – and the sooner a bipartisan deal can be reached, the better.

Many economists, while acknowledging that deficits could become a future drag on economic growth, say the top priority now should be clear to both parties.

“We know the pandemic is having a sharp and persistently negative effect on household income and the American economy right now,” Mr. Tedeschi says. “That should be our priority.”

From Clinton to Biden, Democrat approach to economy makes U-turn