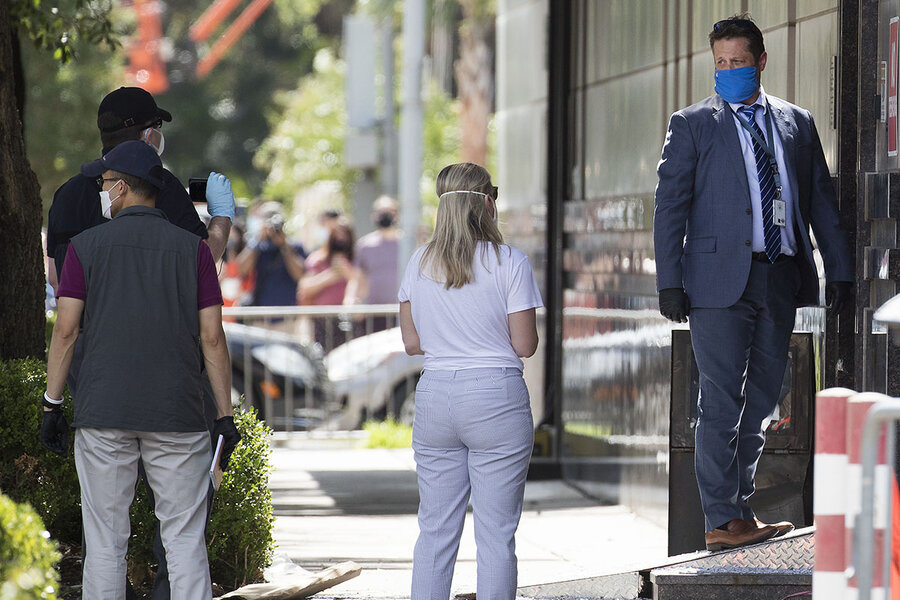 Ms. Tang’s tale is one piece of the unfolding crackdown on Chinese spy activities in the U.S., an operation that also led to last week’s ordered closing of China’s consulate in Houston. Beijing retaliated by ordering the U.S. consulate in Chengdu to shut down.

The extraordinary tit-for-tat closures – unusual even by Cold War standards – illustrate an accelerating deterioration in U.S.-China relations that some worry could lead to dangerous missteps, as well as to a further weakening of the two national economies as well as the teetering global economy.

“The closing of consulates is a major step,” says Dean Cheng, a senior research fellow specializing in Chinese military and political affairs at the Heritage Foundation in Washington. “Even in the darkest days of relations between the U.S. and the Soviet Union, the two sides typically expelled diplomats for spying,” he adds, “but here the Trump administration is going significantly further.”

The State Department anticipated China’s possible equivalent response to closure of the Houston consulate. What caught it off guard, some officials say, was the ordered closure of the U.S. consulate in Chengdu – the westernmost of five U.S. consulates in mainland China and the closest to Xinjiang and Tibet, two regions the U.S. has been closely monitoring, and speaking out about, for human rights violations.

Still, many say it was long past time for the U.S. to move beyond rhetoric and dialogue to action. Past administrations have focused on China’s efforts to gain access to American technology through American companies operating in China, some experts say, while paying less attention to China’s expanding activities on U.S. soil.

Some U.S. officials claim the Houston consulate had developed as a central command for a spy network made up of Chinese-military-linked graduate students and other Chinese nationals in more than two dozen U.S. cities.

Republican Sen. Marco Rubio of Florida tweeted on Thursday that “China’s consulate in Houston is not a diplomatic facility [but] the central node of the Communist Party’s vast network of spies & influence operations” in the U.S.

China’s “cyber and other theft in the U.S. have been a problem for a very long time,” says Shirley Kan, an independent China expert who until recently worked at the Congressional Research Service in Washington. “The difference is in how this administration fights back. Unlike some previous administrations, [this one] is not afraid of friction” with China.

Indeed Secretary of State Mike Pompeo laid out a stark vision in a speech last week at the Nixon Library in Yorba Linda, California.

“If we want to have a free 21st century, and not the Chinese century of which [Chinese leader] Xi Jinping dreams, the old paradigm of blind engagement with China simply won’t get it done,” he said. “We must not continue it and we must not return to it.”

Still, some wonder why, if U.S. action was “long overdue,” as Senator Rubio and others are saying, the administration has not acted until now.

“There certainly is good reason to confront China. My concern is, escalating this tension, is it really about confronting China, or does it have something to do with an election in four months?” Sen. Angus King, an independent who serves on the Intelligence Committee and caucuses with the Democrats, said on CNN last week.

Others have wondered if the spy networks were watched but tolerated to avoid disrupting negotiations for Mr. Trump’s first-phase trade deal, reached in January.

Mr. Cheng says it’s a possibility the election is a factor. “But it’s also true,” he says, “that intelligence investigations take a long time, you have to be able to lay out evidence that can be presented in an open court.”

Ms. Kan notes that David Stilwell, assistant secretary of state for the Bureau of East Asian and Pacific Affairs, said in comments on the Houston consulate that research theft attempts had accelerated over the last six months and might be linked to efforts to develop a coronavirus vaccine.

She says the Department of Justice revealed the FBI was investigating links between the Houston consulate and what The New York Times reported were “attempts to illegally transfer medical research and other sensitive information from institutions in the area.”

Mr. Cheng says he hopes the Department of Justice proceeds to make public more information about the Houston consulate and the spying allegations.

“I think it helps our case to say, ‘We are a rule-of-law country, we don’t just randomly make accusations, and this is exactly why we are doing what we’re doing,’” he says.