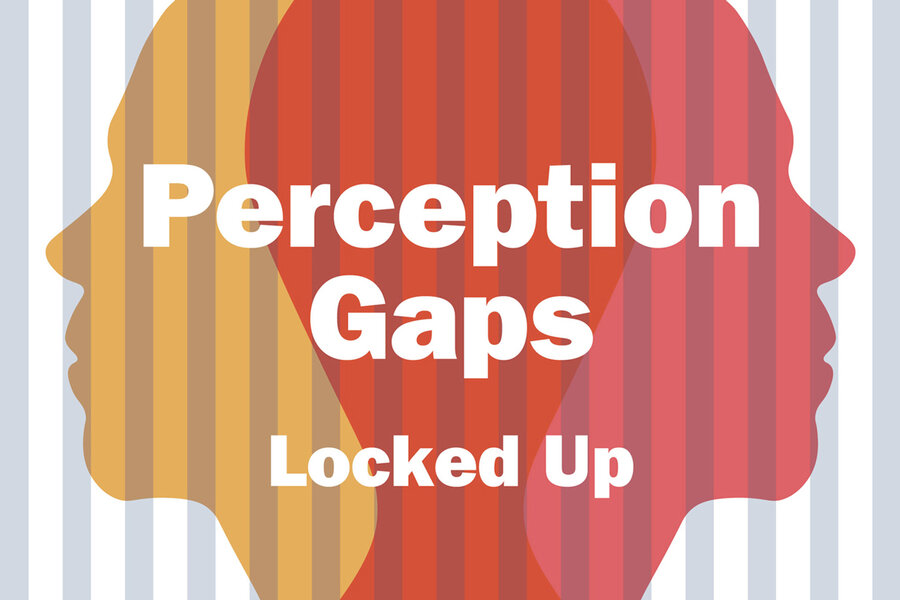 We started reporting Season 2 of Perception Gaps before the world knew it would be grappling with a pandemic. It was also before the killing of George Floyd prompted massive protests against racism and police brutality across the U.S.

We quickly realized that these events are changing our society in unexpected ways. At the same time, they revealed more starkly than ever the flaws in our most complex institutions – like the criminal justice system.

Over six episodes, we explore those flaws by looking closely at the spaces where public perception doesn’t align with the realities of the system. We dive into everything from the history of mass incarceration, to the role imprisonment plays in American society today, to the wide-ranging efforts to transform the institution. Join us for a brief discussion about our reporting, and what to expect in Perception Gaps: Locked up.

Note: This is the introduction episode to Season 2 of Perception Gaps. To listen to the other episodes, please visit the season landing page.

This audio story was designed to be heard. We strongly encourage you to experience it with your ears, but we understand that is not an option for everybody. You can find the audio player above. For those who are unable to listen, we have provided a transcript of the story below.

Spencer Piston: …plays a huge role in shaping those gaps…

Bernadette Rabuy: …disturbing to a lot of people…

Jeremiah Bourgeois: …it is a terrible place….

Yasser Payne: …and the criminal justice system is an imperfect system…

Paula McClain: …maybe there is something more going on…

Laura Peña: …some of the perceptions that Americans have….

Thaddeus Johnson: …are getting better, but disparities still exist…

Nazgol Ghandnoosh: …a real break in the promise of our criminal justice system….

Jonathan Lange: …and I don’t have any answers, I just have questions.

Samantha Laine Perfas: The criminal justice system is a large, opaque system. We get a lot of ideas about how it works from movies, shows, and politics. But the reality is different than what most people realize. Welcome to Perception Gaps: Locked up.

Jessica Mendoza: Hey, Sam. Thanks for having us.

Sam: And today, we’ve got some exciting news. Next week, we’ll be launching season two, bringing you a whole new lineup of episodes.

Last season, we looked at ten different topics where public perception didn’t line up with reality.

This season, we’re focusing on one topic: the criminal justice system. We’ll be taking you behind bars to explore misperceptions – around racial disparities in prisons and jails; the economics of incarceration; and the overall purpose of locking people up. Finally, we’ll hear from those who are trying to address some of the system’s most pressing issues.

Jess and Henry will be joining me both in the podcast and behind the scenes.

Jess: I do. But before we get into the season, I want our listeners to know that Perception Gaps is your baby. You came up with it and executed it last time. What made you decide to do a second season?

Sam: Well, originally, this podcast was only designed to be a limited series of 10 episodes. But what we realized was that people really loved it and we continued to get a ton of positive feedback. Well, after the season ended with people just asking us to make more episodes. So given that and then the current climate, we realized that right now it’s especially tough to know what’s true and what isn’t. This podcast creates that space for people to acknowledge that they may not know everything, and that’s OK.

When we decided to do a second season earlier this year, I approached you guys, Henry and Jess, to see if you wanted to collaborate with me. And you said yes. And it’s been awesome. It’s allowed us to do things this season that we couldn’t do last season, such as on the ground reporting, and to really hyper-focus on one topic.

Speaking of which, Henry, I’d really love to hear your perspective on this. You’re our criminal justice reporter. So when I approached you about collaborating on Perception Gaps, what were your thoughts on tackling this issue and how has it been for you reporting this season?

Henry: Honestly, I’d say like my first thought when, when you approached me about sort of a Season 2 focused on the criminal justice system is, Which part? The justice system is much bigger and more complex than I think many people realize. And it’s more than just prisons. It’s more than just the courts. There’s so many, a lot of layers of complexity that on one hand, it would be really interesting to explore and on another hand, it’s just a very large beast to try and – try and tackle. But, you know, the more the more I talked about it with you and given that, you know, the entire season would be focused on it, sort of the more excited I got.

Overall, it’s – it’s been great. I’ve enjoyed being able to help out with it and do it in this new format and in such a deep and nuanced way.

Sam: And Jess what about you? What has been the most powerful part of the series for you?

Jess: I think a couple of things. When we started reporting this back in January and February, I was already really excited. It seemed like there was a lot to explore and the idea of doing it through a podcast was just super engaging for me. But as we proceeded with reporting and 2020 sort of unfolded, it was really striking to see how connected the stories we were telling that we were reporting already were to things like the coronavirus pandemic or the protests following the killing of George Floyd. And finding those connections was really a confirmation of why this is such important work.

The other thing is, you know, my background is in writing, like Henry. But there’s something about audio that really feels very personal. I’ve spent a lot of time with the material at this point. And I think hearing those voices really speak to us, whether they’re experts or people sharing their personal experiences, work experiences, with us. It’s something I’m really excited for our listeners to, to hear and to experience for themselves.

Which is a great point to ask you, Sam: How can they listen to this podcast?

Sam: The easiest thing you can do is go to our website, csmonitor.com/perceptiongaps. You can listen to all the episodes. They’re right on that page. And you can also find links to your favorite podcast players. You can also sign up for our free newsletter to get the episode sent right to your inbox each week. We include bonus materials behind the scenes takes, other articles, photos, videos. Again, the website is csmonitor.com/perceptiongaps. Jess, Henry: Before we leave our listeners, is there anything else that you want to add?

Henry: I think it’s always great to get to try and cover this. The justice system in new ways, because it is sort of almost intentionally. And a lot of ways opaque. So anything that we can do to make it sort of more accessible and understandable for the public is great. Given all the things that have been happening this year, I think it’s really, really timely and important and gives us a lot to wrestle with and help listeners and readers and everyone who follows them on the edge to understand it.

Jess: Yeah, and I just want to add that we’ve got a lot of great voices, a lot of great stories this season. So whether you’re a longtime Monitor reader who’s just trying out podcasts for the first time or you haven’t had a lot of experience with the Monitor, but you love audio. We really, really hope that you join us on this journey and hopefully you find something meaningful to you when you listen to all of our – all of our episodes.

Sam: And I do want to say real quick: to all of our returning listeners, thank you. Because without you and your support, we wouldn’t be here doing a second season. And to all of our new listeners, we’re really excited to have you. So, again, you can find everything at csmonitor.com/perceptiongaps.

MLB postpones another series due to virus