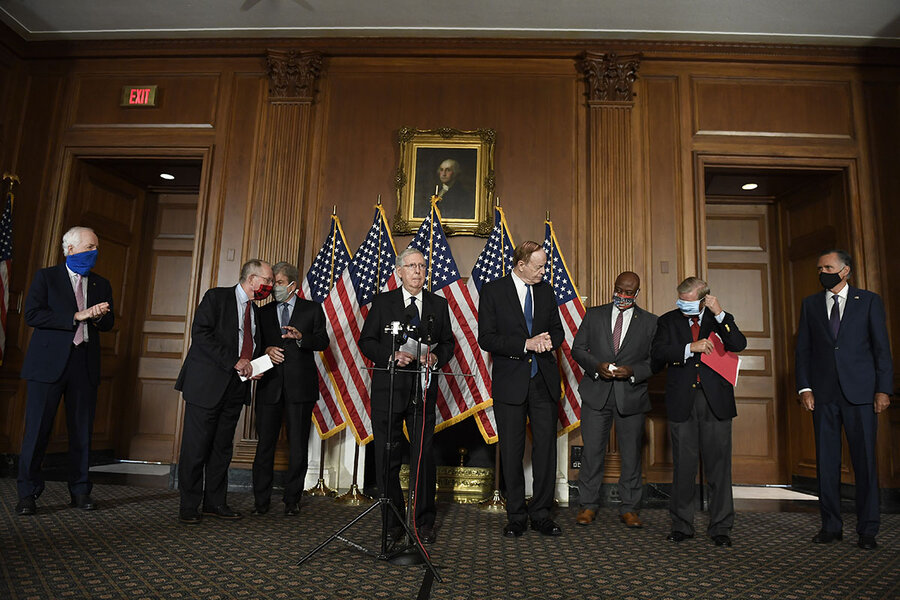 Republican senators can read polls as well as anyone. Right now, they’re staring at the numbers, and seeing a future where the GOP caucus is diminished – and the White House is occupied by President Joe Biden.

You can see this in the way they’re handling the new $1 trillion Senate version of the coronavirus relief bill.

Yes, it’s still early, there’s plenty of time for President Donald Trump to recover. All he needs to do is get his job approval rating up into the mid-40s and trim a few points off Mr. Biden’s poll lead. Then he’d be within the margin of error. Another 2016-like surprise victory would become a possibility.

But Senate Majority Leader Mitch McConnell and his party colleagues don’t seem to be betting on that. For one thing, they’re dismissing stuff the White House wants in the bill out of hand.

President Trump pushed for the Senate to include a payroll tax cut, for instance. At one point he indicated he’d veto a relief bill that didn’t have one. It didn’t even make it into the first draft.

GOP Senators are also balking at a White House request for $1.75 billion for a new FBI headquarters building. It’s not related to COVID relief, they say.

“I don’t know – that makes no sense to me. I’d be fine with stripping it out,” said Sen. Lindsey Graham, normally a staunch Trump ally, on Tuesday.

Then there’s the negative things some Republican Senators are saying about the tranche of deficit spending the new bill represents.

“There is significant resistance to yet another trillion dollars,” said GOP Sen. Ted Cruz of Texas on Monday.

It’s more likely than not that Republicans and Democrats will come to agreement on a new relief bill eventually, given the dire state of the pandemic and US economy.

But still, for many in the GOP, it’s as if they’re looking past the current president and practicing the way they’ll oppose anticipated big-spending Democratic presidential proposals to come.