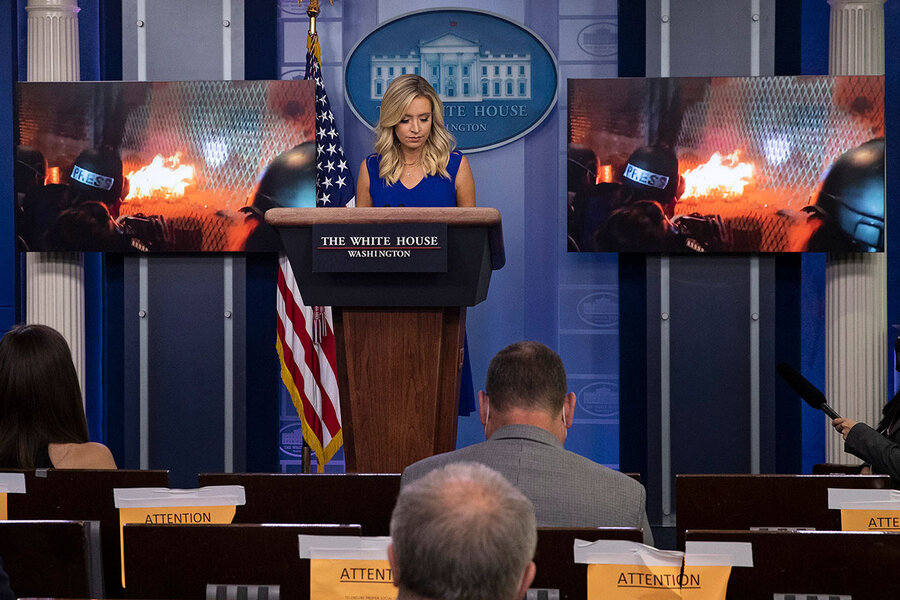 Nightly images of mayhem out of Portland, Oregon, gave way to hope Wednesday after federal and state officials announced a conditional withdrawal of federal forces from the embattled northwestern city.

But by Thursday, the promise of a quick end to the stalemate seemed to unravel, following another night of clashes between protesters and federal officers. And with each passing day, as the Nov. 3 elections approach, the politics grow more fraught.

The federal law enforcement effort in Portland is centered on protecting the federal courthouse there. But amid a pandemic and an economy in deep distress, President Donald Trump’s reelection prospects have been thrown into serious doubt – and some observers have suggested that the federal intervention is also, at least in part, a bid to deflect attention from the larger, national crises.

President Trump is presenting himself as a “law and order president,” an echo of Richard Nixon’s successful presidential campaign in 1968. But there’s a big difference: Mr. Nixon wasn’t the incumbent. Mr. Trump is – and fairly or not, he risks blame for some of the upheaval.

Democrats and their presidential candidate, Joe Biden, still run the risk of a backlash, to the extent that those on the side of the protesters are associated with destruction and violence. Some Black activists have recently suggested that the original focus of the protests – demands for police reform and racial justice after the May 25 killing of George Floyd in police custody in Minneapolis – is being obscured.

For now, however, observers say the scale of the upheaval in Portland isn’t big enough to hurt Democrats or help Mr. Trump much, at a time when the coronavirus remains the overwhelming issue for the country.

“This is not 1968, where the violence and the demonstrations were the story, not a sideshow,” says William Galston, a top domestic policy aide in the Clinton White House. “They’re not the story this year.”

Even when the focus is on Portland, the issue favors Democrats. So far, suburban voters, who could swing the presidential race, are not giving Mr. Trump high marks for the Portland deployment.

“I don’t necessarily see [the Portland clashes] helping him,” says Karlyn Bowman, an expert on polling at the American Enterprise Institute in Washington.

Analysts note that American suburbs have become increasingly diverse, making it more difficult for politicians seeking suburban votes to use race as a wedge issue.

“[Mr. Trump’s] trying to distract from the central failure on coronavirus,” says Democratic strategist Jared Leopold. “It’s not a persuasive argument for the suburbs.”

And polls show voters trust Mr. Biden to do a better job on race relations than Mr. Trump by a wide margin – 21 points, according to a recent Fox News poll.

Still, the violence in Portland is not without risks for Democrats and Mr. Biden. The former vice president has already rejected the left’s rallying cry of “defund the police.” And in remarks in early June, he distinguished between “legitimate peaceful protest” and “opportunistic violent destruction.”

But he probably needs to speak up again, says Mr. Galston. “Someone who’s been in politics as long as he has knows that saying something once is not enough.”

As of today, polls show Mr. Trump in serious danger of losing the election, and if he’s going to use Portland to his advantage, he needs to get the messaging just right, says Scott Jennings, a former political adviser to President George W. Bush.

“The public wants [Mr. Trump] to respect the need for some kind of police reform, but I don’t think they approve of anarchists hijacking the situation,” Mr. Jennings says.

The public sees the president responding to the lawlessness but isn’t aware of his efforts on police reform, he adds.

Trump defenders point to two such efforts: On June 16, Mr. Trump issued an executive order aimed at incentivizing police reforms. He also backed reform legislation in the Senate – led by the only Black Republican in that chamber, Sen. Tim Scott of South Carolina – which the Democrats blocked.

The Democrats, who control the House, passed their own bill, which won’t go anywhere in the Republican-controlled Senate. Thus the matter is deadlocked – the typical fate of most election-year legislation.

But on the ground in Portland, there’s no waiting, as the nightly rhythm of protests, police action, and violence has continued.

Especially with the pandemic, in which many Americans’ lives and livelihoods are at stake across the country, protecting public safety has to be paramount, say Trump defenders. To small business owners whose establishments have been threatened or damaged, protection by law enforcement is key.

“Politics should not have anything to do with saving lives,” says Bruce LeVell, a Black business owner in Atlanta and executive director of the National Diversity Coalition for Trump. “No sitting mayor, Republican or Democrat, should ever deny any law enforcement assistance to people in need.”

But the multitiered law enforcement dynamic in Portland is especially fraught. After federal, state, and local officials all announced that federal agents would begin leaving Portland, it soon became clear they had differing interpretations of when the federal forces’ departure would take place.

Acting Homeland Security Secretary Chad Wolf said that the federal law enforcement presence would remain “until we are assured that the courthouse and other federal facilities will no longer be attacked nightly.”

Oregon Gov. Kate Brown, a Democrat, said the federal withdrawal would begin Thursday, and that state police would take over protection of the federal courthouse in Portland.

Portland Mayor Tom Wheeler, a Democrat, told reporters on a conference call that he welcomed the agreement for “the imminent withdrawal” of federal agents, but vowed to “continue to fight this occupation until these forces are gone from every city.”

On that call, organized by the U.S. Conference of Mayors, other mayors reinforced Mayor Wheeler’s message, that the deployments of federal officers were not just unwelcome but also harmful, unconstitutional, and a political ploy.

Seattle Mayor Jenny Durkan said the arrival of federal agents in Portland as well as Seattle had produced spillover unrest and an escalation of violence in her city. She confirmed that the agents have since withdrawn from Seattle after pressure from local and state authorities. And she raised a concern echoed by some Democrats: that the federal deployments seem “very much like … a dry run for martial law.”

Mr. Trump himself raised the specter of extraordinary measures to address the challenge of holding an election amid a pandemic. “Delay the Election until people can properly, securely and safely vote???” he suggested in a tweet Thursday.

Republican lawmakers, however, were quick to dismiss the prospect. “Never in the history of federal elections have we ever not held an election, and we should go forward with our election,” House Minority Leader Kevin McCarthy told reporters.

The politics that seem to lurk at every turn in this season of unrest are hard to avoid. On Thursday, the Department of Justice announced that another federal law enforcement initiative in American cities, Operation Legend, would expand to include Cleveland, Detroit, and Milwaukee. Operation Legend is billed as an effort to help state and local law enforcement fight violent crime, and is different from the deployment in Portland, which aims to protect federal property.

All three cities are located in battleground states – Ohio, Michigan, and Wisconsin.