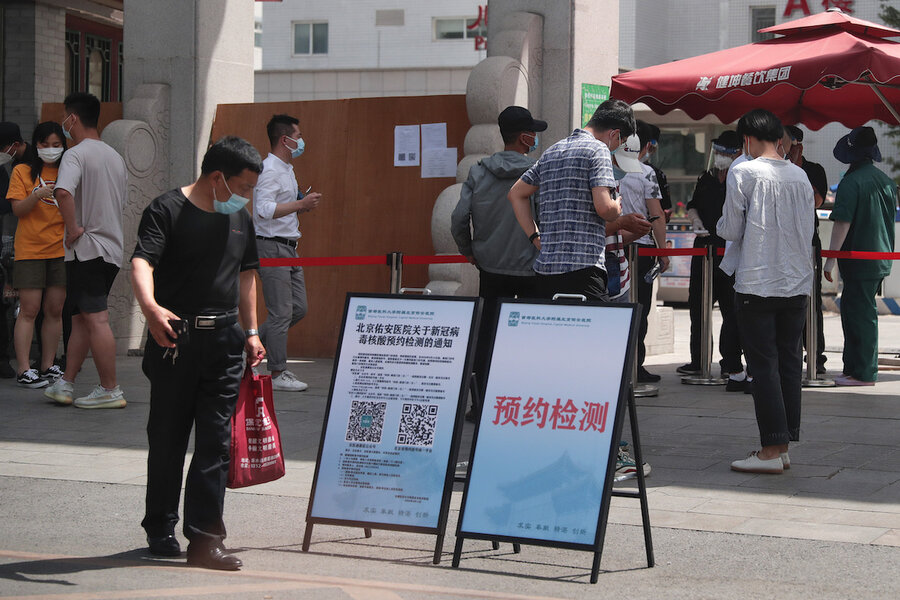 China moved swiftly Monday to try to control a new outbreak of the coronavirus after 36 more cases were confirmed in Beijing.

People were lined up at hospitals and other facilities around the capital as authorities rushed to administer thousands of nucleic acid tests of people who worked at a major wholesale food market, anyone who had visited it in the past two weeks, or anyone who had come in contact with either group.

Authorities have confirmed 79 cases of the coronavirus over four days in what looks to be the largest outbreak since China largely stopped the epidemic’s spread at home more than two months ago. The new outbreak appears to have started in the Xinfadi market, Beijing’s largest wholesale food market, prompting inspections of fresh meat and seafood in the city and elsewhere in China.

“We must continue to take decisive measures to defend against outside cases and internal resurgences, and mobilize all units to take responsibility,” said Xu Hejian, the director of the Beijing government information office.

At a time when other countries are loosening virus-related restrictions, the development shows the importance of being ready to deal with any fresh outbreaks. They can pop up at anytime in unexpected places, even weeks after the epidemic appears to have died down.

Greece eased restrictions on incoming visitors Monday. Passengers on some international flights will no longer face compulsory coronavirus tests. Hotels and museums are opening in the tourism-dependent economy, as are gyms, in the latest step in a phased reopening of businesses.

“Salut!” said a masked manager to a pair of regular customers as they entered a brasserie in Paris, where cafes and restaurants reopened for the first time since the fast-spreading virus forced them to close their doors March 14.

In the United States, the governor of hard-hit New York state threatened to reinstate business closings as some parts of the country struggled with an outbreak that appeared ready to stretch for months.

China’s authoritarian government and tight social controls enable tracking of residents’ movements through the use of apps and a network of neighborhood associations. Entry to many office buildings, stores, and restaurants requires proof on a smartphone that the person has not traveled to areas where the virus is still active.

Beijing has closed the Xinfadi market and is requiring anyone who went there to self-isolate for two weeks. Neighborhoods close to the market have been put on lockdown and more than 76,000 people tested.

Citywide, Beijing has suspended the planned restart on Monday of some primary schools and reversed the relaxation of some social isolation measures.

Inspectors found 40 samples of the virus in the closed market, including on a chopping board for imported salmon. That prompted some supermarket chains to take salmon off their shelves over the weekend, and inspections of markets, stores, and restaurants

Beijing health officials said gene sequencing showed the virus strain causing the new outbreak was related to that in Europe, though it wasn’t clear if it was being spread by the movement of people or transportation of food.

Experts were doubtful the virus was being spread through salmon or other food products.

Ian MacKay, who studies viruses at the University of Queensland in Australia, said there was no evidence to suggest a link between outbreaks and food.

“For my money, it is more likely to be a person who came into the area with lots of people and the virus has spread, as the virus does,” he said.

Japanese health ministry officials said they are closely watching the Chinese investigation, as budget sushi restaurants in Japan rely heavily on imported seafood, especially from China. They added, though, that they have not seen scientific evidence suggesting the virus could be transmitted through food.

South Korea is also among those countries seeking to prevent a resurgence of the outbreak, reporting 37 new cases of COVID-19 on Monday. Authorities said 25 of the cases came from the Seoul area, where health authorities are scrambling to trace infections linked to entertainment and leisure activities, church gatherings, warehouse workers, and door-to-door salespeople.

Other countries are still battling major outbreaks. India’s home minister offered 500 train carriages Monday for use as makeshift coronavirus hospital wards as New Delhi struggles to contain a spike in cases. The Health Ministry reported a jump of more than 11,000 new infections nationwide for a third consecutive day.

In the U.S., cases in nearly half of states are rising. New York state officials are trying to avoid the fate of others seeing a surge in new cases after reopening.

“We are not kidding around with this,” Mr. Cuomo said Sunday at his daily briefing. “You’re talking about jeopardizing people’s lives.”