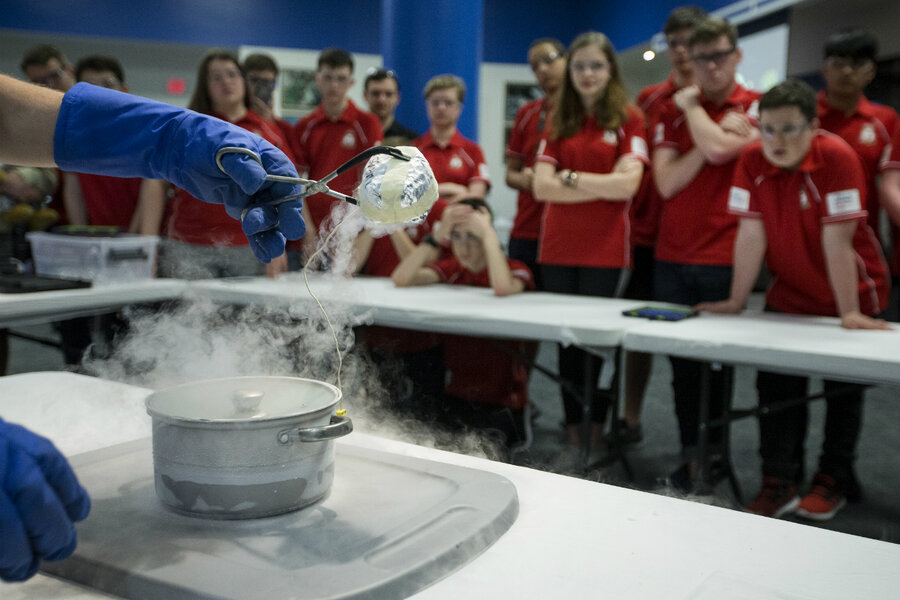 Zena Cardman shimmied into a white spacesuit beside the 6.2 million-gallon pool, NASA personnel by her side ensuring everything was sealed up tight.

The Houston Chronicle reports it was barely 8:30 a.m., but the bright-eyed Cardman was prepping to spend up to eight hours in the pool, known as the Neutral Buoyancy Laboratory, as part of her training to be an astronaut.

At least 20 feet above her in the visitor’s gallery, a group of high school students – usually quick to moan at such an early hour – were just as bright-eyed as they watched the newbie astronaut suit up.

They had a perfect view of what is much more difficult to see at ground level: Within the 40-foot-deep pool sat a mock-up of the International Space Station, providing astronauts a training ground for spacewalks because of the environment’s likeness to zero gravity.

One especially giddy boy watched in wonder as the process unfolded.

It’s exactly the reaction officials hoped for from students at Space Center University, a five-day program at Space Center Houston that was recently expanded to include middle school as well as high school students.

Similar to Space Camp in Alabama, students are exposed to the rigors of astronaut training, as well as science, technology, engineering, and math fields that could land them a job at NASA one day. They conduct experiments, go behind the scenes at the Johnson Space Center, and even get a chance to scuba dive.

The program, started in 2000, brings students from around the world to Houston each year. With the expansion to middle school students, participation in the program has almost doubled to 2,000 so far this year.

“It’s exciting to see the growth of the program,” said Kaci Heins, the education manager at Space Center Houston’s museum. “We’re trying to inspire the next generation of explorers early on by showing them this is exactly what they do across the street.”

Space Center Houston, typically teaming with visitors speaking countless different languages, was a ghost town when the group of 36 high school students from Great Britain and France recently strolled up to its front doors.

It was the group’s fourth of five days participating in the program, and so far they’d built mini-Mars habitats, a launchable rocket, and a cryo-capsule to protect egg-stronauts – astronauts made of eggs – from minus-321 degrees, a similar temperature to what astronauts would experience on Mars.

It was only 7:30 a.m., but there was not a yawn in sight as the students prepared for arguably the most exciting of the five-day program. This day, they were getting a crash course in scuba diving, a key component for participants between 15 and 18.

The diving experience is the best way to show them what it’s like to be an astronaut – which is the goal of the whole program, said Dave Brown, program coordinator.

Initially, the five-day program was limited to students ages 15-18 and available 50 weeks of the year, though officials usually fill only 26-28 weeks. The programs for 11- to 14-year-olds were added this year with activities tailored to a younger audience.

Along with building rockets and habitats and scuba diving, students also meet an astronaut and tour NASA’s Houston facilities, such as Mission Control and the Neutral Buoyancy Laboratory.

Emily Rowe, an 18-year-old from Great Britain who participated in the early April group, found the STEM activities most beneficial. She dreams of being a mechanical engineer after college, and the program “is just another STEM building block on the path toward my goal,” she said.

Depending on the number of students enrolled each week and whether hotel, transportation, and food is included, the cost of the program ranges from about $616 to $1,046. Students can apply in groups or as individuals on the museum’s website. Some scholarships are available.

“We’re trying to inspire them ever earlier on, so they can learn what courses to take in high school and show them the pathway so then they’re on their way,” Ms. Heins said.

Even in early April, the air in the Williams Pool building was thick with humidity and chlorine.

The aluminum walls were rusting, the paint was peeling, and the bleachers were old and crumbling. The pool had clearly seen decades of use.

But it doesn’t have to be pretty to help scuba-certify the men and women headed to space. NASA has been using William’s Indoor Pool, about a 20-minute drive from the Johnson Space Center, as a training ground for astronauts since 2008. Each astronaut must be a certified scuba diver so they can practice spacewalks in the Neutral Buoyancy Laboratory.

Space agency officials are able to make the area resemble zero gravity through a combination of flotation devices and weights, making the astronauts appear to “hover” under water. The name – Neutral Buoyancy Lab – refers to a state in which an object is just as likely to sink as it is float, according to NASA.

Though astronauts can still feel the weight of their suits – unlike in zero gravity – and some tasks are easier or harder than in space, the pool “is currently the best method available by which astronauts train for spacewalks,” according to NASA.

About an hour after astronaut Cardman took her turn in the pool, the Space Center University students were suiting up for a scuba session taught by a former lab diver.

The students’ shouts of glee and splashing of diving fins echoed throughout the building as they painstakingly learned how to breath underwater through their oxygen masks and keep themselves close to the bottom of the pool.

Despite their best efforts, some struggled to breathe only through their mouths, while others continued to float to the surface. But eventually, the students were ready for the next step: putting together PVC pipes underwater, an activity that gave them a sense of what it’s like to work in zero gravity.

“We wanted to get as close as possible as what they would see in space, in a 4-foot-deep chlorinated pool,” Mr. Brown said.

For Andrew Paterson, a 21-year-old instructor with the group from Great Britain, the diving activity showed him once again that becoming an astronaut was what he wanted to do.

Space Center University, he said, “showed me that I want to move forward … and focus my mind on things I need to do to become an astronaut.”