Adorned with all available methods tree — the main symbol of the New year. Balls and cones hung even our grandparents, but does that make their grandparents? We offer you to look into the matter and figure out how there was a tradition to decorate the tree and when it takes root in Russia.

Where the roots grow

There are two main versions of the origin of the tradition — religious and secular. Some researchers believe that the Christmas tree symbolizes the Paradise tree from which eve plucked the proverbial Apple. Accordingly, all sorts of toys that we hang on the branches is the fruit of Paradise tree. According to another version, the tradition of decorating a tree dates back to the ancient Germanic celebration of the winter solstice Yule. On this day people decorated and then burned in the fire of oak or ash logs. 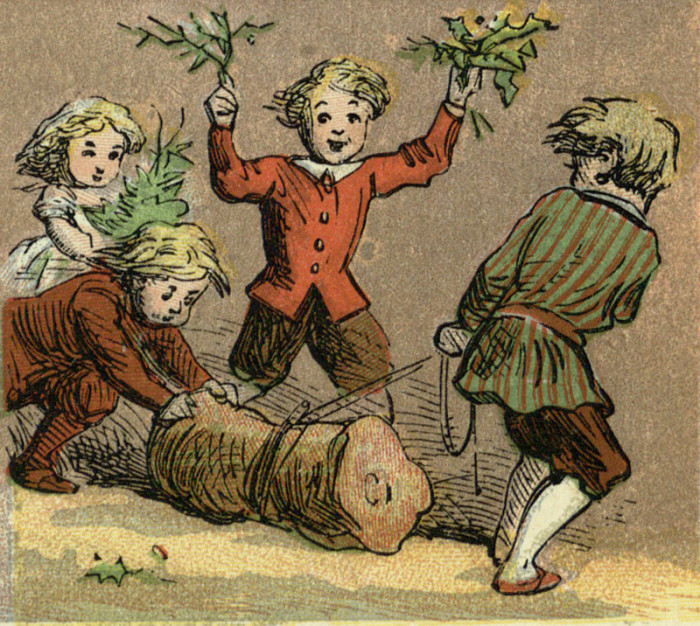 Of course, it is not known who first decided to decorate the tree for Christmas. Although disputes about it are very hot. A few years ago between Latvia and Estonia the dispute, in which city early became the custom to put on the area of fir, Riga or Tallinn. Just before the diplomatic scandal is not reached.

There is evidence that in the sixteenth century religious figure Martin Luther, had arranged a house in the Saxon town of Eisleben religious holidays, where the tree was the main attribute. According to legend, Luther once saw on the spruce top is falling star, and considered it a sign. 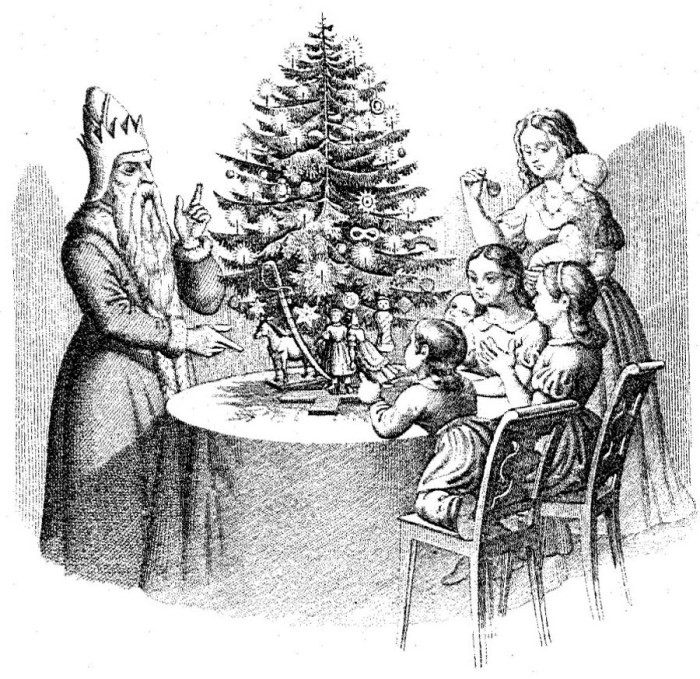 Engraving from the German book “50 fables with pictures for kids”

By the seventeenth century the Christmas tree became commonplace in many German länder. A Christmas tree hung from the ceiling head down — so it represented the ladder, lowered from heaven to the people. Somewhere small Christmas trees decorated the same as it was family members and guests who were supposed to congratulate and bestow.

For a British court, the first Christmas tree dressed in 1760, 1819 forest beauty became part of a court celebration in Budapest, 1820 m in Prague.

The arrival in Russia

In December, 1699, Peter I of a special decree in Russia introduced the Julian calendar and ordered to reschedule the New year from 1 September to 1 January. The decree contained provisions exactly how loyal should be fun. The new year was to celebrate with fireworks and copious refreshments, and the house to decorate the branches of coniferous trees. 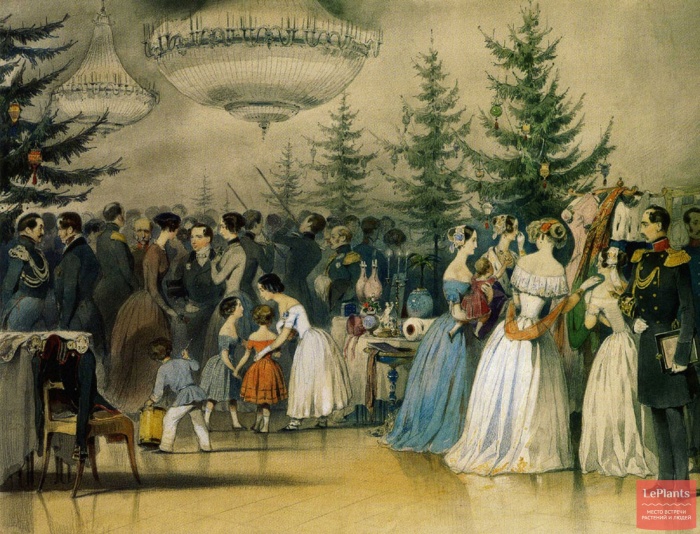 Although the Christmas tree has taken root in the us later in the first half of the nineteenth century. For the first time in the Imperial Palace, she was put on 24 Dec 1817. Innovation is gradually adopted to know. Initially, the tree is almost not decorated, the branches only served to reinforce the candles and lit them twice — in Christmas eve and on Christmas itself.

Established the fashion for Christmas trees gave a boost to the imagination of the traders. In 1840-ies near Gostiny Dvor in St. Petersburg there were Christmas bazaars. Solid citizens with childish excitement competed for the tree longer, thicker, intricate dressed. On the decoration didn’t have to wrestle with himself: was a Christmas tree with a ready-made decor. It was expensive, though, and mere pennies in comparison with fir-tree decoration in some rich houses, where the green branches hung a diamond necklace. 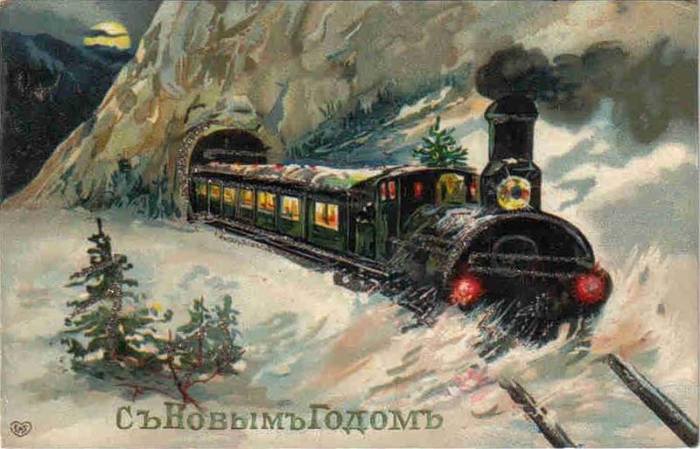 Orthodox priests unsuccessfully, but persistently protested against the Christmas tree as a secular and even pagan custom. If only they knew that it would take not much time and a Christmas tree will announce the symbol of religious intoxication.

In the first years after the revolution, any measures aimed at the prohibition of Christmas trees was not undertaken. But due to financial difficulties, few could afford the pleasure to richly decorate the tree. Although, resisting the chaos of the external life, trying still to find decorations because the tree seemed a no connection to last. 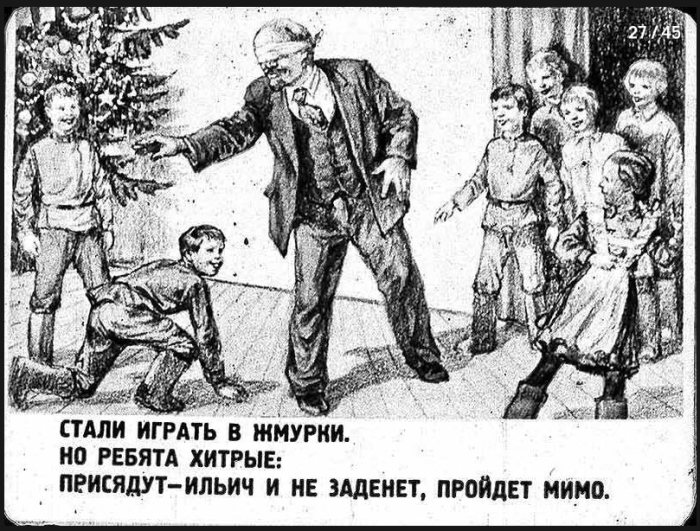 Frame from the film “Lenin guys on the tree”

The persecution of the decorated tree began in 1929, when the party press has officially condemned the celebration of Christmas. And with him as “priests ‘ custom”, and a Christmas tree, allegedly poisoning children “religious poison.” Now the tree if brought into the house, set away from the window so nobody saw.

The tree was rehabilitated in 1935. Supposedly after a conversation of Stalin with the party official by Postyshev. Stalin endorsed the proposal Postysheva to return the children to the tree, and he was in the newspaper “Pravda” with an article, where he reproached those who “defame in children’s entertainment as a bourgeois idea”. The note came out in December, and in just a few days across the country were organized festive events with Christmas trees and arranged production of Christmas decorations. 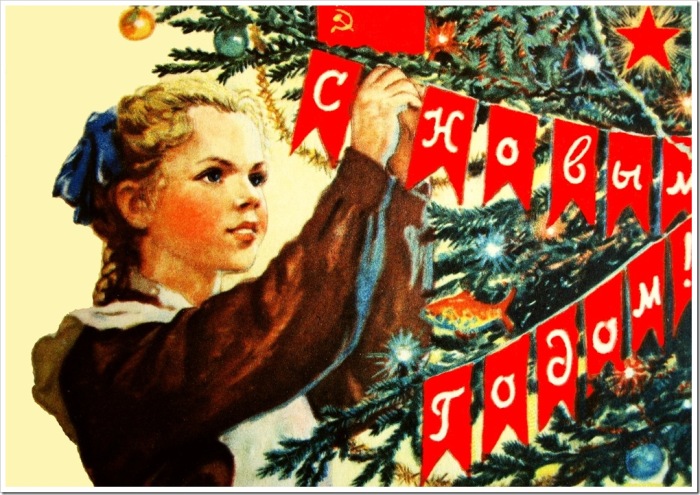 The Soviet tree is not in any way have been associated with Christmas. Decorations reflect the spirit of the time. Blue Christmas star with seven rays was replaced by a red five-pointed. On the tree hung a miniature aircraft, cars and other things, indicating the progress of the state. In the late 30’s there were toys in the form of father Frost and snow Maiden. Gathered to release balloons with portraits of Politburo members, but, thank God, it did not come.