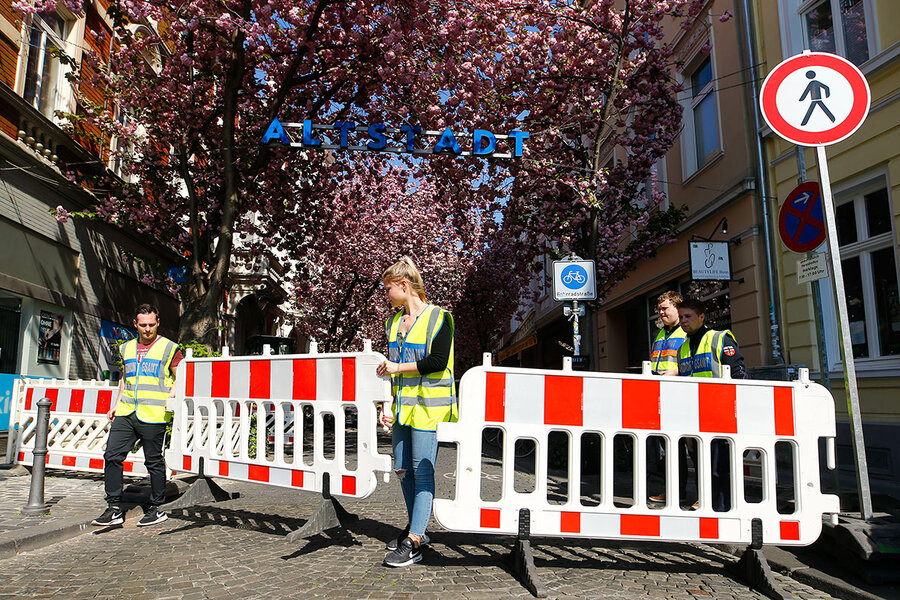 Marc-Oliver doesn’t carry a gun. Instead he relies on a baton, his wits, and years of training.

One of Germany’s ubiquitous officers of the ordnungsamt, or office of public order, Marc-Oliver says he has prevented a suicide with “my bare hands.” Another time, he disarmed a man wielding a knife by talking to him calmly, while his partner sidled in with pepper spray.

“Sometimes, it would be better to have a weapon,” says Marc-Oliver, using a pseudonym since he is not authorized to speak publicly. “I am scared on the job sometimes, but fear makes you careful. It makes you rational.”

Meet Germany’s municipal guardians of public safety, responsible for duties ranging from noise and crowd control to animal welfare and help for homeless people. They don’t organize drug busts or investigations, which are left to the criminal police; in most of Germany’s 16 states the ordnungsamt do not carry lethal weapons.

The ordnungsamt are a product of Germany’s particular history, but they also illustrate a policing trend across Europe – to work closely with specialized agencies that are better suited to cope with social or mental problems, and to hand off some duties to them. In the Swedish capital, Stockholm, for example, mental health emergencies are dealt with by a specially trained mobile psychiatric team.

“Police are the strongest executors of force, but they are only one part of the solution,” says Uwe Marquardt, a German police officer and vice president of the German Police University. “In Germany, social problems are solved on many other levels. Social assistance and security: If someone is happy in society and doesn’t worry about putting food on the table, they don’t need the police.”

The shift from the Gestapo, Hitler’s notorious militarized police force, to a service “that’s there for civilians” took decades, says Thilo Cablitz, spokesman for the police chief of Berlin. “We had the catastrophic history of the Nazi era, and we had to learn to change the goal from representing state oppression to representing civilians. This doesn’t happen overnight.”

Reforms began with a separation of the functions of the police and the military, and parsing out duties now performed by the ordnungsamt. Eventually, much of everyday law enforcement was decentralized to the state level.

Recruiting the right “character” of person is also important, says Mr. Cablitz. When they have been picked, police cadets undergo nearly three years of training, much more than any U.S. police academy provides. The curriculum is steeped in history, communications, and political education, including basic questions like “Why do we even have the police force? When can I use force? We are constantly learning,” says Mr. Cablitz.

Protests are one “litmus test for police,” says Stefan Schwarz, a 35-year German police veteran and United Nations training officer. As the police try to manage the tension between the democratic right to demonstrate and potential risks to public safety, “we use our power to explain the rules, and why citizens have to follow the rules,” says Mr. Schwarz. “Rather than in America where it’s ‘because – because it’s the law.’”

The German police’s transition to a modern force has not always been a smooth journey. For example, homosexuality was prosecuted as a crime in Germany through the mid-1990s, and while the police acted within the bounds of the law, says Mr. Cablitz, they treated gay people terribly.

“We went to the community and apologized for those years,” he says. “We said, ‘We acted wrongly, we are sorry, and we want to build something together.’”

Though the German police have a relatively good public image, they are not immune to the problems that have rocked the United States. In Stuttgart last month, hundreds of rioters looted shops and clashed with police after a patrol had searched a young man for drugs. It took police nearly five hours to regain order, in a sign that not all young people view police as friendly helpers.

Elsewhere in Europe, Scotland and the Nordic countries stand out for their adoption of “problem-oriented policing,” says Megan O’Neill, a researcher into police behavior at the University of Dundee in Scotland.

This approach grapples with the root causes of crime and tries to find tailored solutions, Dr. O’Neill explains. “It’s ‘let’s look at why this area is experiencing a lot of drug dealing and solve the initial problem, rather than attacking symptoms,” she says. “Who is involved? Do they need more access to education? Do they need more support for their income? It’s a longer-term view.”

A recent study of problem-oriented policing projects over the past 30 years by the Campbell Collaboration, an international research network, found they had seen a 34% drop in crime and disorder.

People who buy drugs are not normally arrested and criminalized, but instead encouraged to join support and recovery programs.

“The idea [is] that someone can’t fix that kind of lifestyle if they don’t have a solid base to start from,” says Dr. O’Neill. “This whole movement takes policing completely out of it.”

In Sweden, the city of Stockholm has piloted a project that took mental health crises out of the police’s hands. Instead, such emergencies are dealt with by trained nurses and paramedics in special ambulances. The project has been so successful that the police union called for it to go nationwide.

Putting suicide response and other mental health duties in the hands of trained professionals gives “these patients a better quality of care and relieves the police who can focus on their core mission,” the project’s founder, Andreas Carlborg, told national broadcaster SVT.

Such an approach could have an impact elsewhere. Senior English officers have said that as many as 40% of calls to the police are mental health-related.

When traditional policing is required, it helps that most British police officers do not carry lethal weapons and are trained on de-escalation strategies, says Dr. O’Neill.

“Being able to go into a situation without a gun immediately changes the tone, and doesn’t bring that ultimate threat into an already tense situation,” says Dr. O’Neill. “Policing in the United States tends to resort to the use of force more quickly.”

But she has a word of caution for activists in the U.S. promoting the “defund the police” movement, who might want to draw on European experiences of collaborative, community-based, problem-oriented policing.

It is expensive – requiring European-level tax rates and funding for social services. And “it’s important to have a long-term plan, and not a knee-jerk reaction” for reform, she adds. “Do it carefully and thoughtfully, because these services are so important to everyone’s daily lives.”

Back in Germany, Marc-Oliver remembers fondly his early days as a public safety officer, even if he did not like his uniform – an “ugly green jacket” bearing the coat of arms of Langenfeld, his hometown.

Working for nearly two decades in Langenfeld, Marc-Oliver was so recognizable that people would approach him while he was out with his family on weekends. “There were only four officers working for the town’s ordnungsamt, and everyone would know me,” he says. “I’d tell them, ‘Come to my office for a coffee on Monday, but right now I want to have an ice cream with my daughter. I’m not working.”

Later, he moved away from his hometown, and found he preferred to not be recognized for the significant powers he carries. He muses, “Ordnungsamt are often seen as lesser than the police, but we have to learn five books and the police learn about two,” he says, showing a little competitive fire.

Most of all, he loves his work. “You put on your uniform and you never know what’s going to happen,” says Marc-Oliver. “It’s like a Kinder Surprise egg. Every day is different.”