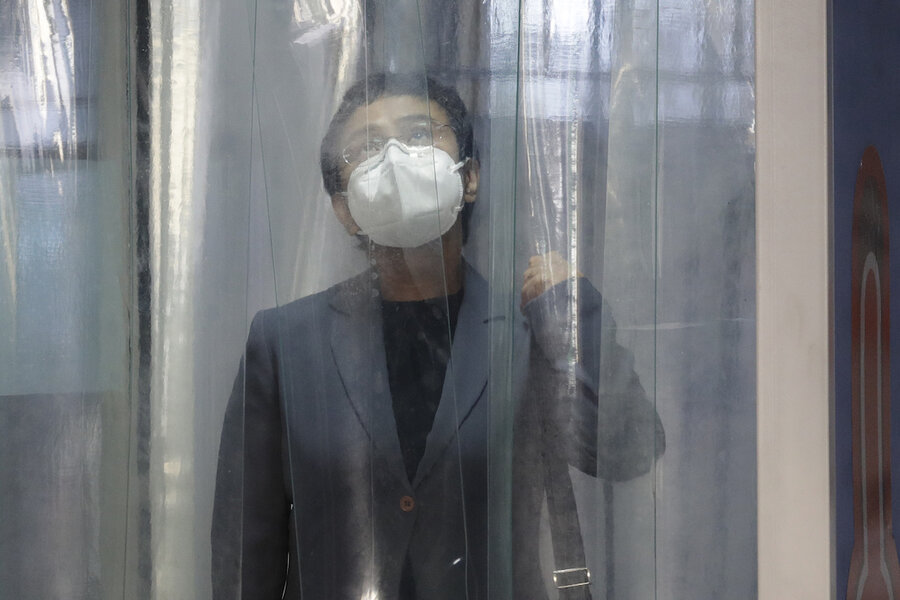 An award-winning journalist critical of the Philippines president was convicted of libel and sentenced to jail on Monday in a decision called a major blow to press freedom in an Asian bastion of democracy.

The Manila court found Maria Ressa of the online news site Rappler Inc. and former reporter Reynaldo Santos Jr. guilty of libeling a wealthy businessman. The Rappler’s story on May 29, 2012, cited an intelligence report linking him to a murder, drug dealing, human trafficking, and smuggling. The site’s lawyers disputed any malice and said the time limit for filing the libel complaint had passed.

“Rappler and both accused did not offer a scintilla of proof that they verified the imputations of various crimes in the disputed article upon the person of Keng,” Judge Rainelda Estacio-Montesa said in the 36-page ruling. “They just simply published them as news in their online publication in reckless disregard of whether they are false or not.”

“The decision for me is devastating because it essentially says that Rappler, that we are wrong,” Ms. Ressa said in a news conference after the ruling. Her voice cracking, she vowed that “we will keep fighting” and appealed to journalists and Filipinos to continue fighting for their rights “and hold power to account.”

In summer 2019, Maria Ressa wrote in the Columbia Journalism Review about the day police came to her Rappler office to arrest her because of the so-called “cyber-libel” allegation in February 2019:

Outside, people were protesting. I got some sleep, maybe two or three hours. I can sleep anywhere when I’m really tired. As I drifted off, I thought: The more they do this, the more I have firsthand knowledge of how power is abused. The more they try to intimidate me, the more certain I am that I must keep fighting.

The businessman, Wilfredo Keng, welcomed the ruling, which he said vindicated him and cleared his name “which Ressa, with one click of a button, attempted to destroy.”

Ms. Ressa was sentenced to up to six years but her lawyer, Theodore Te, said the jail terms and other penalties imposed could not be enforced unless all appeals were rejected. She posted bail for the case last year and will study possible appeals in the next 15 days, Mr. Te said.

“The verdict against Maria Ressa highlights the ability of the Philippines’ abusive leader to manipulate the laws to go after critical, well-respected media voices whatever the ultimate cost to the country,” said Phil Robertson of Human Rights Watch, adding the verdict was “a frontal assault on freedom of the press that is critical to protect and preserve Philippines democracy.”

President Rodrigo Duterte and other Philippine officials have said the criminal complaints against Ms. Ressa and Rappler were not a press freedom issue but a part of normal judicial procedures arising from their alleged violations of the law.

Mr. Keng dismissed the allegations in the 2012 story as baseless and false and said Rappler refused to take down the story online and publish his side of the story. He provided government certifications in court to show that he has no criminal record and sought 50 million pesos ($1 million) in damages, but the court awarded a much smaller fine.

Rappler’s lawyers said the story was based on an unspecified intelligence report and that Philippine penal law requires a libel complaint to be filed within one year. Mr. Keng filed his lawsuit in 2017, five years after the story was published.

A cybercrime law, which the Rappler journalists allegedly violated, was also enacted in September 2012 or four months after the story written by Mr. Santos was published. Rappler’s lawyers said Philippine penal laws cannot be retroactively applied.

Rappler, however, acknowledged that it updated the story in February 2014 to correct a misspelled word but said it did not make any other changes. The Department of Justice, which brought the libel charges to court, contended that by updating the story, Rappler effectively republished the story online in 2014, an argument dismissed by the news site’s lawyers.

The Department of Justice argued a complaint can be filed under the 2012 cybercrime law for up to 12 years, countering Rappler’s argument that Mr. Keng’s complaint was invalid due to being outside the one-year deadline for libel.

Ms. Ressa, who has worked for CNN and was one of Time magazine’s Persons of the Year in 2018, has accused the government of abusing its power and of using the law to muzzle dissent.

Many news outlets in the Philippines and beyond have criticized Mr. Duterte’s policies, including his anti-drug campaign that has left thousands of mostly poor suspects dead.

Mr. Duterte has openly lambasted journalists and news sites who report critically about him, including the Philippine Daily Inquirer, a leading daily, and ABS-CBN, the country’s largest TV network which was shut down by the government’s telecommunications regulator last month after its 25-year franchise expired. Congress has been hearing the network’s request for a franchise renewal.

The shutdown has been criticized as it cut off a major source of information on the COVID-19 pandemic in a Southeast Asian hot spot of the disease.